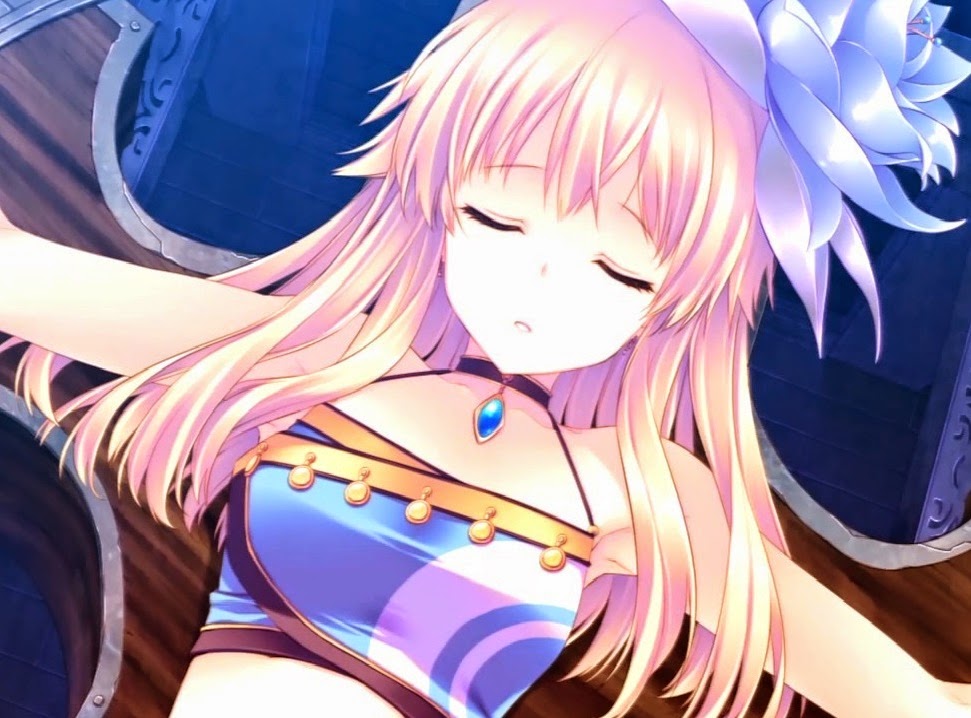 Review by Matt S.
Tears to Tiara 2: Heir of the Overlord is the kind of game that you’d expect from a console at the end of its life. It’s neither big budget nor high profile, and it is resolutely and unapologetically a game for the genre fans.
It even has something of a sordid past. The original Tears to Tiara was a Japan-only adult erotica game on PC that was later censored and released as a 12+ PlayStation 3 game when people realised that it was one of those rare games that also played well enough that people weren’t just playing it because it titillated. Tears to Tiara 2 is not even close to an adult game, of course, but nevertheless that little bit of trivia just goes to demonstrate that when we talk about niche games, this series as a whole is the kind of thing we’re talking about.
But Tears to Tiara 2 has its own kind of charms, and while it may well be only for the JRPG faithful, it also does right by that demographic, and Atlus deserves credit for taking a risk and localising a game that almost everyone is going to ignore. 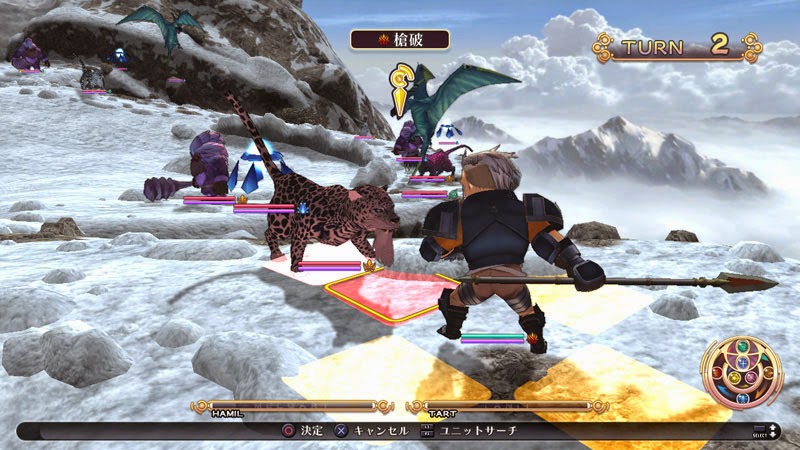 It’s worth noting at the outset that while the screenshots make Tears to Tiara 2 look like a Fire Emblem-style tactics RPG, that’s only about a quarter of the game. The majority of the experience actually plays out like a visual novel, with reams of text to wade through and nothing but still images or character portraits to accompany it. We’ve seen this kind of game a lot this year (Hakuōki: Stories of the Shinsengumi, Xblaze: Code Embryo and of course the Danganronpa games), and while they’re niche by virtue of their minimal action (and apparently the fact that reading is anathema to many people), they’re also fascinating, assuming they’re well written and engaging.

Tears to Tiara 2 isn’t exactly Danganronpa or Hakuōki, and it’s not the kind of visual novel that you’ll be musing over from a philosophical point of view, but what the game does offer is the kind of pulp fantasy that is appealing for the same reason that the terrible barbarian films genre of the 80s were enjoyable to Dungeons & Dragons fans; it takes a familiar setting, familiar characters and familiar plot hooks, and provides something comforting and familiar with it. Unlike the aforementioned barbarian films, Tears to Tiara 2 doesn’t show the same level of self awareness and sense of humour, but it’s something easy to follow along with anyway.

At least, in those moments where it gets too serious. The world of Tears to Tiara 2 exhibits a broad mix of a range of different European mythologies and religions, and it’s broadly critical of the idea of religious imperialism, with the “bad guy” of the game being a religious empire that echoes the fanaticism of inquisitor Christian Europe. This Empire has put a nation that worships a pantheon of ‘heathen’ gods under slavery, and the game kicks off with the Empire’s attempts to stamp that religion out entirely, even as it completely enslaves its people. This has the potential to be a weighty theme, of course, and the developers do seem to want people to be at least somewhat affected by the thinking behind the story. For example, despite the simple graphical engine, there’s a lingering whipping scene early on that in another universe with a budget ten times bigger could have had the impact of the one we saw in the film, 12 Years A Slave. When the inevitable revenge comes we’re also asked to worry on the sanity of a man that has descended into a berserker fit of rage and allowed himself to be possessed by the God of war. 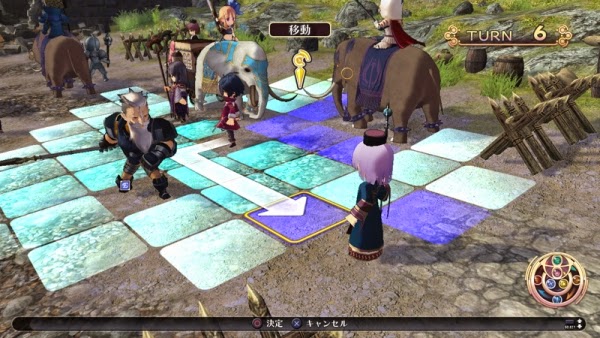 But all of this is let down by writing that reduces the characters to caricatures, with all the subtlety of a Punch & Judy show. “Hehehe, let this be a warning! There is no need for such a thing as a Goddess,” one priest announced to a crowd right before he attempts to execute a young girl (who just happens to be a Goddess). And the laboured writing doesn’t get much better when characters wax sentimental or philosophical with one another, either. “Let’s dance all we want, just the two of us,” the Goddess girl says to the rage-filled Hulk-sans-green-guy. “Until the wounds in your souls are healed. Until the day you can believe in me once more, okay?” Tears to Tiara 2 is far better off when it’s simply having fun, as it’s not quite up to the task of getting deep and meaningful with the players, but thankfully the really serious moments are few and far between.

The other issue I have with the visual novel side of the game is that it is quite poorly paced. All I’ve described above happens in the first couple of hours of a game that lasts upwards of 70 hours. At every turn it seems the developers throw new concepts, philosophies, and ideals at the player, and it becomes difficult to really care about any of them as a result. Games are long, yes (especially JRPGs), but the narratives that games tell are still better off when they offer a razor-focus on a specific few ideas.

With all of that being said, checking the brain at the door turns Tears to Tiara 2 into a virtual page turner. Numerous times while playing I found myself playing on past when I had intended to stop my gaming session simply because I was keen to see what would happen next to my little band of intrepid adventurers. It’s generic and clunky, but it’s also quaint because of that. It reads like this was the first commercial project for a bunch of well-meaning writers and game developers, and that earnestness is addictive for all of its flaws. 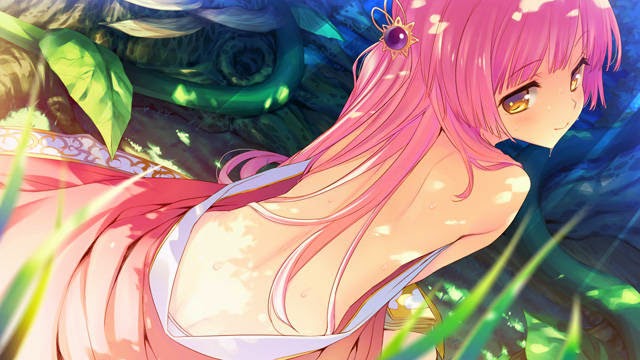 And unlike other visual novels, Tears to Tiara 2 also has the rather excellent tactical RPG gameplay to complement and largely redeem any weaknesses in the text. But I must emphasise this again; unlike Fire Emblem the combat is not the focus of this game and it takes a full 6-8 hours of play before you’ll even graduate from fighting cute bunny rabbits and tutorials to combating actual human enemies, but as a break to the flow of the narrative, these battles are good stuff indeed.

I keep mentioning Fire Emblem, because the developers were clear fans of Intelligent System’s classic approach to the genre. Everything from the layout of levels through to some of the sound effects have been clearly designed to play on genre fans’ familiarity with the series, and for the most part it works. I had great fun working with the same basic levelling-up strategy of Fire Emblem, for instance. When I had a character that I wanted to develop, I would have another character damage an enemy almost to death and then have the underpowered character finish him off to maximise the experience he or she earned.

That’s not to say that Tears to Tiara hasn’t got some ideas of its own, however. Characters have access to a much larger range of skills and develop more as traditional JRPG heroes than Fire Emblem’s restrictive levelling. On the battlefield facing is more important in this game that it was in Fire Emblem, and attacking an enemy from the side or behind yields better results than a front-on confrontation. Front line soldiers also have an ‘aura’ that extends around them preventing the enemy from being able to push past to reach the squishy archers and mages using the soldier as a meat shield. Big units take up multiple squares on the battlefield and are harder to maneuver (but also tend to hit harder). 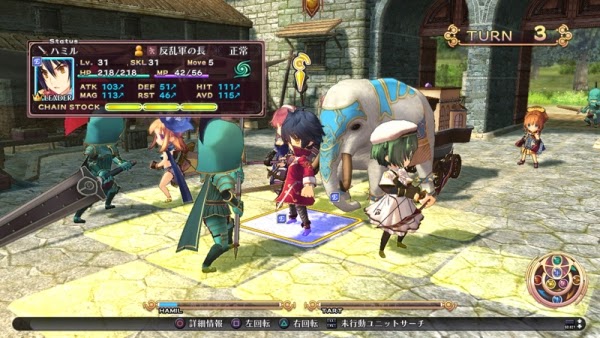 Most importantly of all though is a rewind command. If something catastrophic should happen it’s possible to rewind the battle to a previous turn and try a different strategy. Attacks will still miss if they missed on the first attempt, but perhaps attacking a different enemy or approaching a problem from a different angle will worked where it previously failed. This system isn’t original (Tactics Ogre Let Us Cling Together on the PSP did the exact same thing years ago), but it was a clever concept outside of the Fire Emblem approach to design for the developers to crib, as it encourages players to experiment, and that in turn lends Tears to Tiara a level of creativity to its combat that even the mighty Fire Emblem lacks.

For the first half or so of the game none of this seems to matter because Tears to Tiara 2 is ridiculously easy, even on the highest difficult level. But for the latter half the combat system and challenge level lets loose in full and most players should find themselves pleasantly challenged. The problem is that thanks to all the text sandwiching the battles, that means this game takes a solid 30 or so hours to get going.

And that brings me back to me initial point; this is a game for genre fans only (and by that I do mean fans of both visual novels and tactics RPGs). For those people the game will slowly but surely hook its charms in until they come to see it as something quite brilliant for all its flaws. I fall into that camp as a fan of both genres and I very much enjoyed my time with Tears to Tiara 2. But for more moderate players I sincerely doubt that anything is going to convince them to sit through the first 30+ hours on the promise that from there the game will get really good.