I don’t believe topics should be ignored in games, but I do believe that certain issues need to be handled delicately; things like mental illness, sexual assault, and war are not topics to be taken lightly. LKA is, to me, best known for approaching some very sensitive topics in The Town of Light. So when Martha is Dead was announced, and said to be a psychological horror game set in a time of war, I firmly believed The LKA team could do these issues justice. Set in Italy during World War II, the game follows a young woman in the days following her sister’s sudden and shocking death. The game shows true heart and true promise, but unfortunately doesn’t go much past that at this point. But I can’t review the game at this stage for a single, critical reason. Most of this article will read like a review, and first I’ll discuss the game itself as though it is a review, but then I’ll delve into the reason why I actually can’t give it a proper score.

Before I get too far into this, I’d like to briefly touch upon the controversy that occurred just prior to the game’s launch, when the publisher announced that certain parts would be censored on PlayStation. I originally wanted to play on PlayStation 4, but chose Xbox One as the platform so that I wouldn’t risk missing anything. The PlayStation version skips the interactive elements of a certain scene that drew heavy criticism prior to the game’s release (trust me when I say the scene is integral to the narrative and I wouldn’t have it any other way) as well as some other scenes involving blood and suicide. There’s still lots of blood, though, regardless of which version you play, so without spoiling those exact scenes I can tell you that the issues were around why there was blood more than its presence in itself. Regardless of the reasons, though, I don’t think the developer should have been forced to censor its game because it’s not the complete experience, and this is my belief after playing Martha is Dead. These censored scenes are integral to the narrative, so play this on another platform than PlayStation if you can.

Now, the game itself. Set in Italy, the game is fully voiced in Italian. You can change it to English, but after playing both ways I found there to be more emotion in the Italian. I don’t know if it was because it made it believable and authentic, or just better voice acting, but I highly recommend playing it with Italian voice acting and whatever subs you’d like. Not only is it Italy, but it’s Italy during World War II. Giulia’s story begins long before she finds her identical twin sister dead, but aside from some background info the game begins with the shocking discovery. The girls’ father is a high-ranking German official and the common belief seems to be that Martha’s death is related to that. The backdrop of war puts players in a perpetual state of discomfort, as though anyone can attack at any time. Add onto that the story of the lady of the lake and the fear of ghosts and the entire thing becomes uncomfortable in the best way possible. It’s believably uncomfortable. It’s not angry, it’s just tense.


Giulia wants nothing more than to uncover the real truth behind her sister’s death, though first, she needs to clear herself just in case she did something to participate in all these events unknowingly herself. Good news, it wasn’t her. Bad news, she still doesn’t know who did it. She’ll have to use a combination of ghosts, cameras, dreams, and facts to solve the crime and perhaps finally have some sort of peace (though it’s never that easy).

Yep, I just slid that right in there: cameras. Her camera is one of the few tools Giulia has, bolstered by some trail cams. I’m a trained photographer, and I really appreciated the accuracy of both shooting with the camera and developing the film. To shoot, she can frame the image as she wants, but it does need to be in focus and properly exposed. The camera features all dials it would have had at that time: aperture, shutter speed, focus. There are different films for use, including infrared. Despite using film, the player can take an unlimited number of pictures (although only a selection will be relevant). The developing process has been simplified a bit, but Giulia still needs to frame the image on photographic paper through the enlarger and soak it for the appropriate amount of time. Once developed, photos can be saved to be seen at a later date; these come with all shooting data attached. It’s really quite intricate and authentic, and I was quite impressed by it as a mechanic.

Aside from the camera, there are a lot of tactile interactive elements to the game. For example, to use a bike tire pump the player needs to move a joystick up and down; to climb a telephone pole, the triggers are alternated. I found it really keep my focus from drifting, because I never knew when I’d need to do more than wander around. It helped put me in Giulia’s shoes. Speaking of tactile, controller vibration is used immaculately. There were times it caused me to jump out of my seat because it was so sudden and jarring, while other times it’s more of a guide. 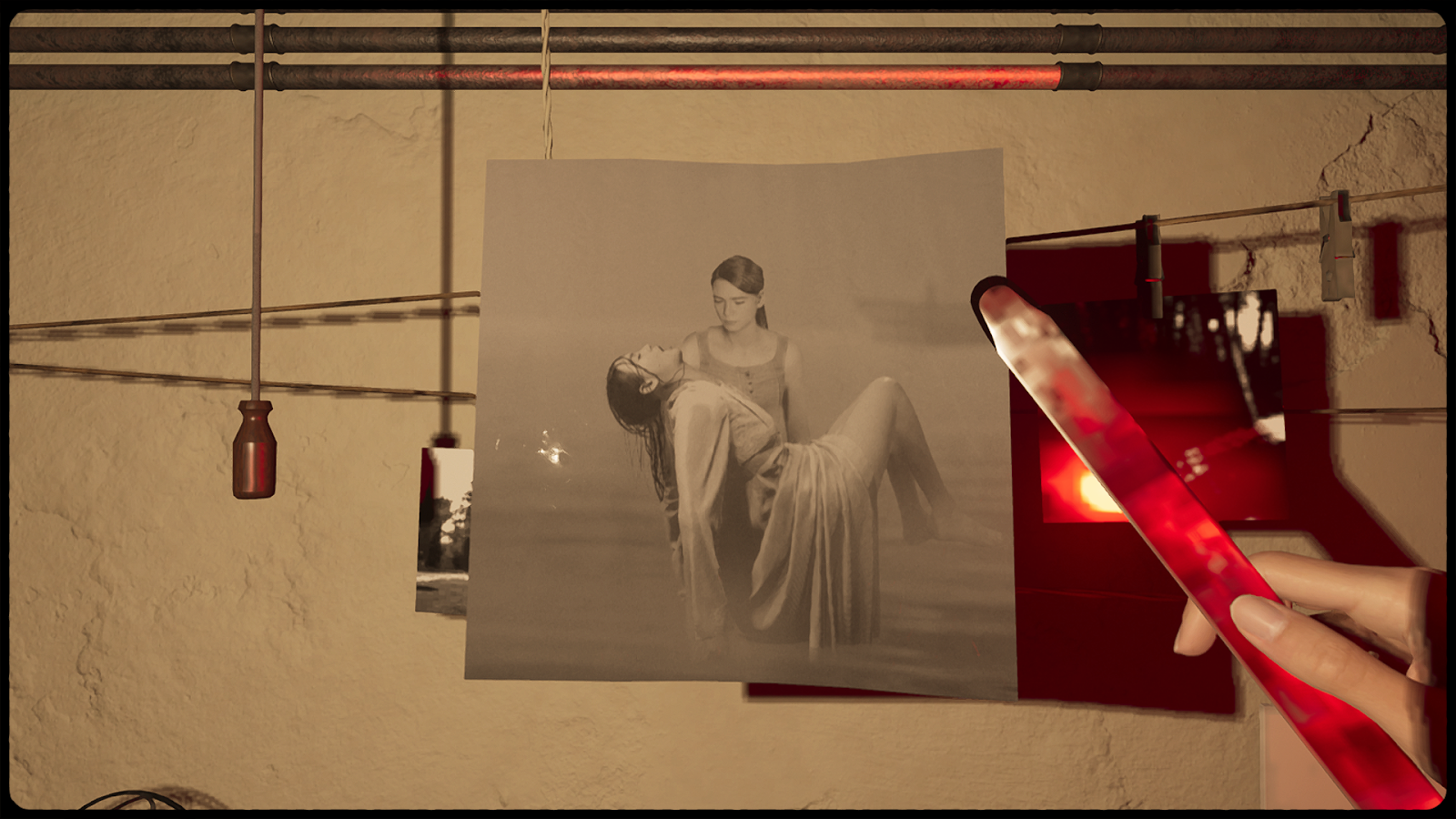 Unfortunately, I’m now going to have to switch gears and be realistic about the game. Generally, I forgive small bugs as long as there’s not a ton of them. But Martha Is Dead plays like one big bug, at least on the Xbox One. Little bugs I encountered include persistent issues with the bicycle that you use to get around (it doesn’t steer very well so I kept getting stuck in corners, and when that happened I couldn’t just get off of it and walk around, I needed to load the last save point) and the map (the X that marks the spot sometimes moves around between viewings for the same objective, and it also points to the bike when the bike is useless).Then there are what I call The Big Bugs. These are the kinds of bugs that destroy the experience and unfortunately make the rating take a nosedive. Basically, I cannot complete the game so I cannot review it as a whole narrative, only a part plus what I can piece together from press releases and trailers. The first Big Bug I experienced was after one of those times I was stuck on the bike and had to load the last save file. It just would not load. At all. I could leave it for an hour and nothing would happen. I tried a couple files, and it was repeatedly the same thing. Then a colleague told me their solution: go back a bit further and load the beginning of a chapter instead of an auto-save. I lost about an hour of time, but I was back in, and could probably have mostly forgiven it.

That wasn’t it, though. Then the other Big Bug happened. The scenery would load, but anything in the shadows would be pitch black. Complete darkness. Nothing but silhouettes if there is light behind, or pure black if it’s objects in front of a shadowy area. This issue decided to appear when I needed to use a telegraph machine hidden with some farm equipment. It was all black. I found my way there based on sound and the little marker that says “hey, look here.” I opened the telegraph. And the shadow issue remained. I couldn’t see anything so I couldn’t select anything. And that’s when my time with the game got cut drastically short. I could not continue without that damn telegraph machine. 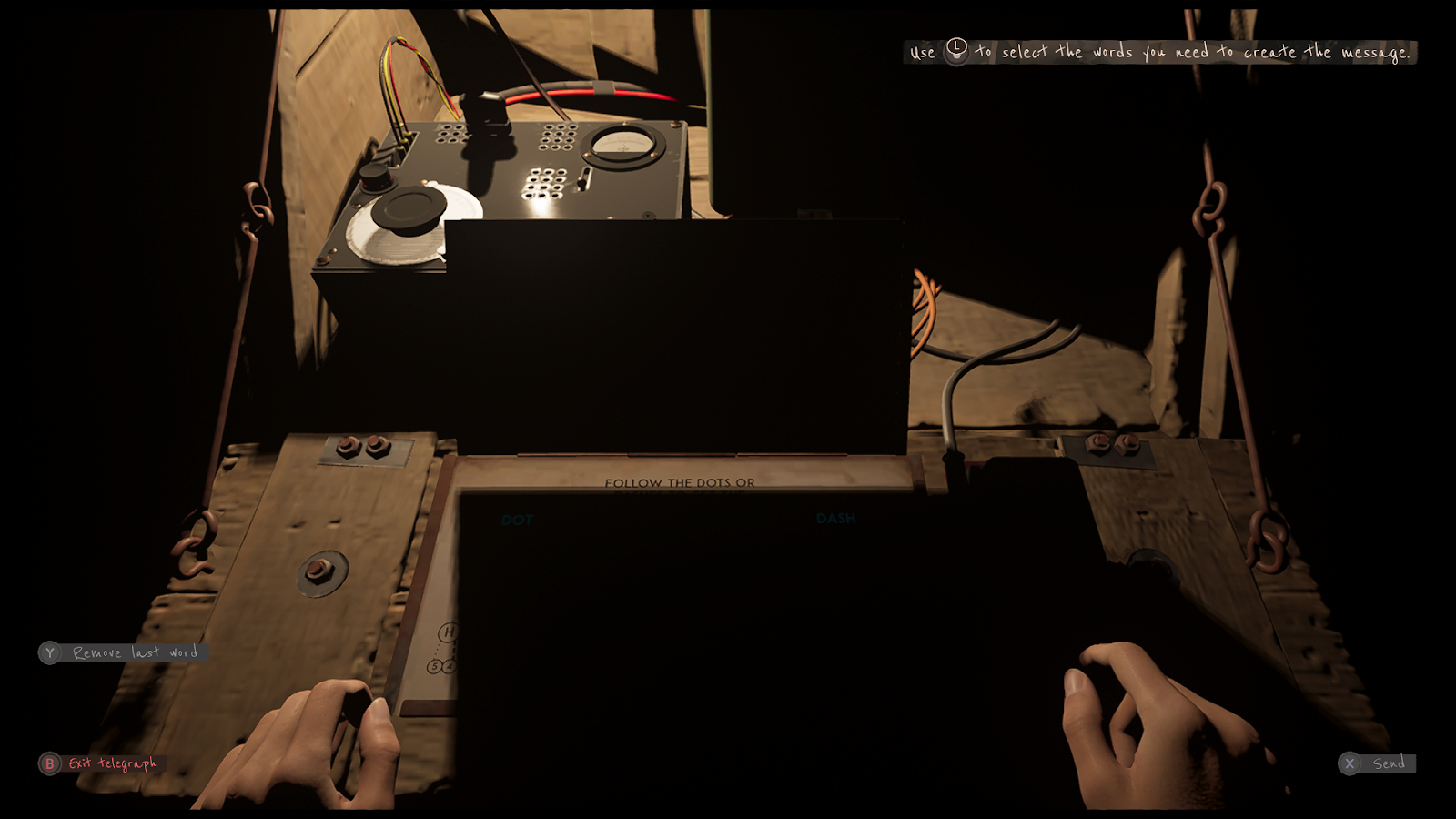 I’m still holding out hope for finishing Martha is Dead. It had a surprising beginning, an intriguing and surprising mid-section… and that’s all I can say. I can’t actually review the game as a whole, because I don’t know its full narrative. Look. I’m the first person to admit I’m emotional. Facts are facts, and “Lindsay is more emotional than most people” is absolutely a fact. As such, it absolutely pains me that I cannot score the game; my heart says that as a whole it would have been an incredible experience worth talking about for years to come. The team at LKA seems to have handled difficult topics with extreme grace and respect. But even so, I have no way of knowing for sure. I only have what is available to me, and what is available to me is incomplete. As far as I know, the devs know about the issues (at the very least, I’ve reported it) and I am hopeful that the issue is resolved and patched so that I can complete the horrifying, emotional, and surprising experience one day soon.

Today, DigitallyDownloaded.net embarks on the start of a new journey…