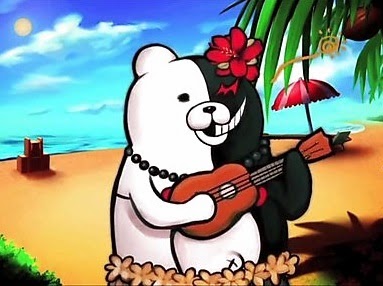 The first Danganronpa was a masterclass in narrative storytelling. Taking a series of murder mysteries, and wrapping them up in a philosophical framework that covered everything from Schrodinger’s Cat to nihilism, game theory to morality, it’s the kind of game that you could replay over and over again, looking at it from different perspectives and trying to puzzle through everything that it was throwing at you.

Because the game does have an academic density to it, it would have been so easy for it to become a dull, self-indulgent experience, but Danganronpa also avoided that completely thanks to a really entertaining cast of characters, and one of the most stunningly unique villains of all time in Monokuma. This was a game I simply could not put down, and it immediately became one of my favourite games of all time.

Strangely enough, because I loved the original so much I was more than a little apprehensive to play the sequel. With the original game being so distinctive and so complete, it was entirely possible that the sequel would turn into a shallow attempt at recapturing brilliance. Thankfully my fears were unfounded; Danganronpa 2 is every bit as intelligent, entertaining, and downright compelling as the first game. 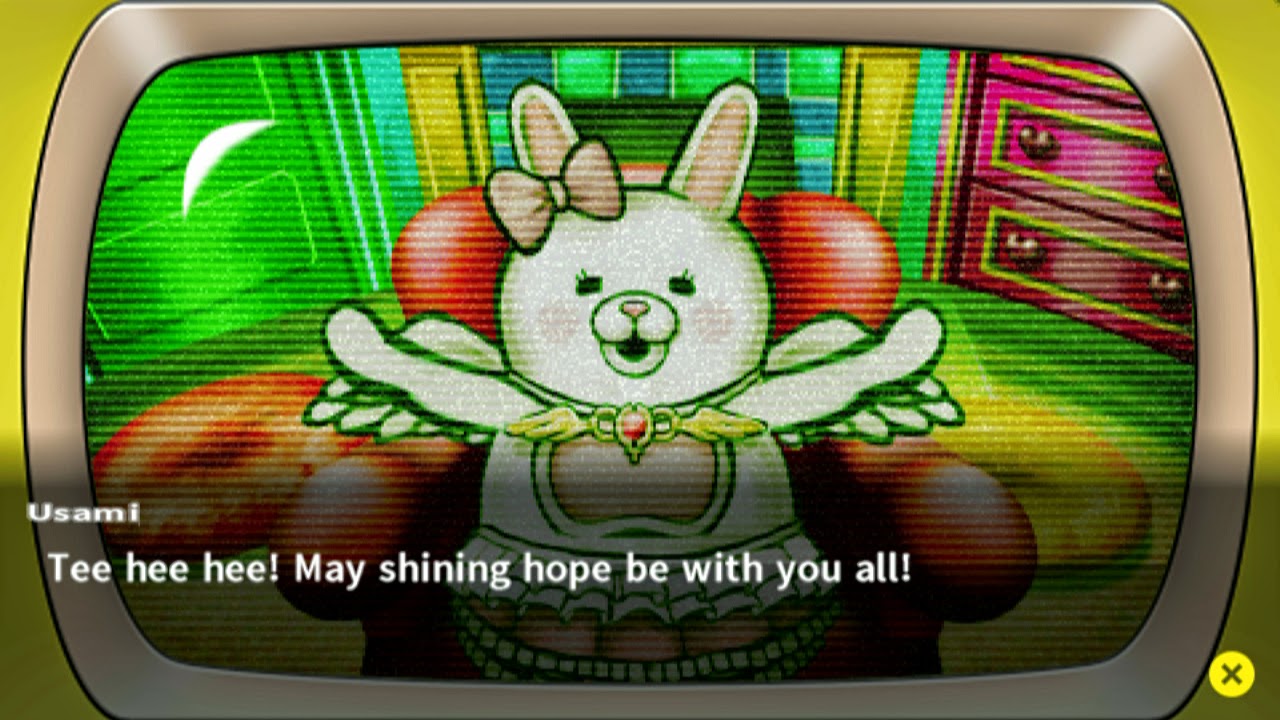 The basic structure remains the same as in the first game. Sixteen school kids find themselves caught in a deadly murder game. Trapped in an enclosed space (the first game was within a locked school building, while this one takes place on a set of islands with no way off), the kids are given a goal – murder a fellow classmate, and don’t get caught doing it. After a murder takes place, the survivors have a chance to investigate the crime and, should they figure out who committed did the evil deed, Monokuma will ‘punish’ (kill) that villain. If, however, they fail to uncover the criminal, then the person that commits the murder is allowed to leave the islands, while Monokuma punishes everyone else.

In other words this base structure is a classical example of game theory. Game theory is an economics concept that is fascinating in the way that it explains how human beings think when placed in a competitive environment. Because we all exist in a permanently competitive environment (otherwise known as a capitalist world), game theory describes many of the day-to-day motivations behind how we live out our lives, and this is why, when it’s used to reflect the selfish, violent, exploitative or nasty side of the human condition, it can strike such a powerful reaction from us. 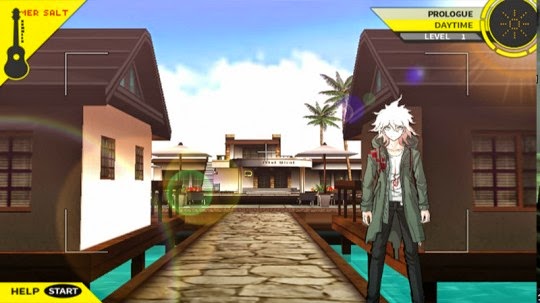 Game theory has been used especially effectively in crime thrillers, with films such as Saw being a great source of inspiration for Danganronpa, and many popular films, such as The Dark Knight, offering up examples of The Prisoner’s Dilemma, an application of game theory which is regularly played out in Danganronpa 2 as well. Because the theme is so deeply human, we end up relating to what’s going on, and we want the characters in Danganronpa 2 to survive. But we know that game theory promises us that they won’t. We know that they will fail from the start. Not because we’re playing a game and if no one kills anyone else to win the ‘game,’ then there won’t be anything to play. No, we know characters in this game will be killed because we know that according to game theory human beings are a bunch of self interested and individualistic fools that would sooner trample on one another in a race to ‘win’ than group together to succeed without anyone coming out on top.

If no one commits murder, then no one is worse off, but then no one “wins” the game and puts themselves in a better position. In other words, no one gets to leave the island of Danganronpa 2 so long as no one plays Monokuma’s murderous game. So the fact that the temptation to murder leads people to murder is a fascinating exploration on human psychology – effectively Danganronpa 2 (and game theory) argues that human beings are fundamentally selfish beings and if so much as one person in a group tries to “play the game” then everyone else has to as well or they all loose. It is an argument to prove game theory correct. 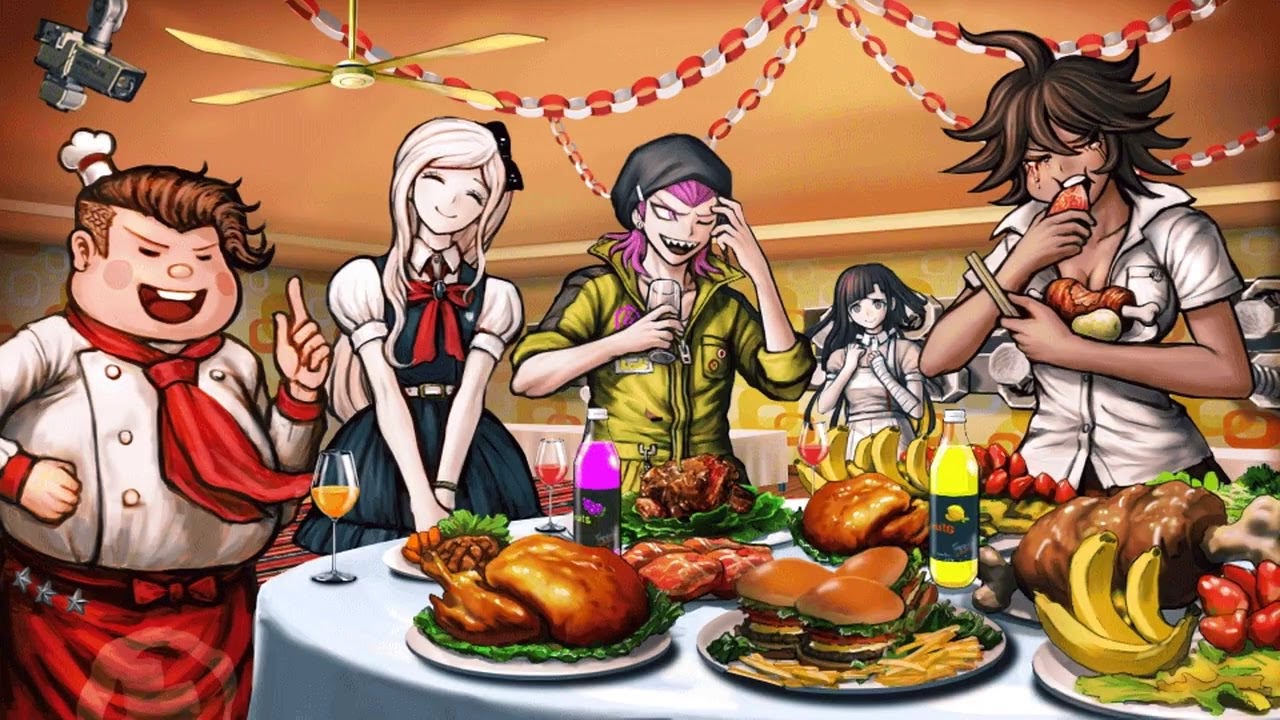 But this kind of game wouldn’t have much of an impact on the player if the characters weren’t such an enjoyable bunch. The fact that the developers have been able to come up with 16 entirely different characters from the first game is an impressive feat, given that each character is fully built out with a rich personality and set of motivations that ensure, even as some of them commit murder, that we sympathise with them for a maximum emotional effect. It’s possible to get to know each of them quite intimately courtesy of a dating game-style minigame that runs in the background when the murders and investigations aren’t going on. In these sequences players can give gifts to each of the other characters and raise their affection level towards the main character that you’re in control of. By the time the affection level hits the limit you’ll know some very personal details about the character, and the vulnerabilities and story behind each of them makes their behaviour (and even murders) understandable. At its core, Danganronpa 2 is a very human story, and as outlandish and over-the-top as it can be, the core story of each of the characters is a very relatable one.

Of course, as good as the characters are, as a visual novel, Danganronpa 2 would have a minimal audience if it didn’t find a way to compensate for the linearity and lack of direct player interaction. The game does this by making the mysteries so darned interesting. I like to think of myself as being pretty good at working out mysteries, but I was only able to guess one of them in Danganronpa 2 before the narrative made it blatantly clear who was responsible for the murder. Red herrings, misdirection and some genius use of clues make the mysteries some of the smartest that we’ve seen since the likes of Agatha Christie and Sir Arthur Conan Doyle. If there’s any narrative failing it’s that the ending is the first time across two games that I’ve felt the developers lost control a little and became self-indulgent, but it’s only slight, and I’d rather my games be too intelligent for their own good (like films like 2001: A Space Odyssey is) than aiming for the lowest denominator and still missing the mark. 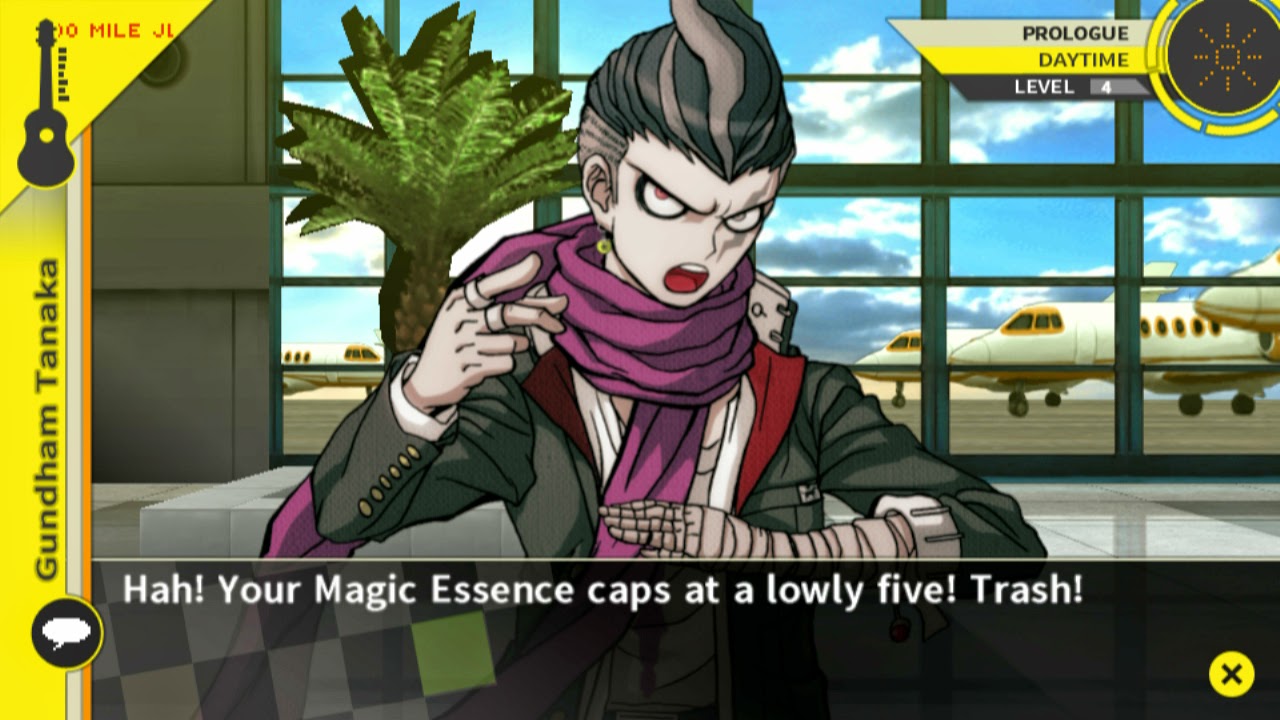 Because the mysteries are so intense and unpredictable it’s easy to forget that the “gameplay” of Danganronpa 2 involves a lot of cycling through text. Because you’re constantly guessing and second-guessing your own analysis of the crime and the story you’re following, you’re still essentially interacting with the game, and because investigations are broken up with a range of simple minigames there’s just enough to Danganronpa 2 that it should satisfy most people that it is, in fact, a game. Not that the developers ever show the slightest interest in pandering to those that would deride it, mind you. Danganronpa 2 game goes out of its way to poke fun at the debate over whether these kinds of games are actually games on multiple occasions, and by extension points out that people that engage in that debate for largely missing the point.

There’s far more thematic depth to the game than its exploration of game theory, well-written characters and some great mysteries. As I mentioned at the start, Danganronpa 2 runs through a wide range of different ideas and philosophies, with some more explicit than others. It’s the kind of narrative that each person will interprete differently. As a fan of Nietzsche, for instance, I found the nihilistic themes and the exploration of the nature of the self to be a fascinating one. Another theme that I’ll think about more fully the next time I play it through will be the concept of Foucault’s panopticon – the characters always assume that they’re being monitored, but does this concern their behaviour, or should it? These are by no means the only themes that are expressed through the game. At the request of the publisher, NISA, I’m refraining from making any spoilers here, so I’m not going to go through and discuss these themes in detail, but if you’ve had any kind of exposure to philosophy, you’re likely to come away from Danganronpa 2 with some new things to think about. 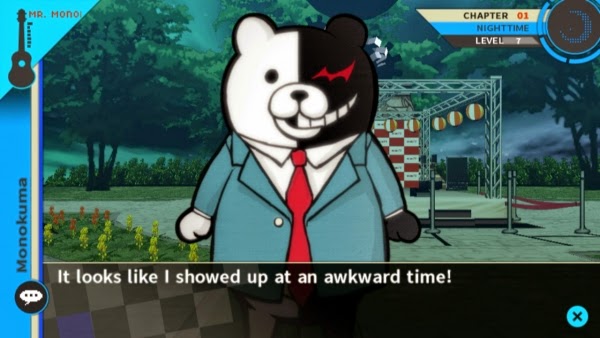 It’s absolutely essential to have played through the first game (as you should have when it released anyway), as the sequel does come with a lot of assumed knowledge if you want to make sense of all of it, and this does lead to the game’s only weaknesses as far as I am concerned. Monokuma, the centre figure of villainy in both games, loses some of his charm this time around. In the first game he plays a moral role, offering a mirror to the other characters in the game and is almost noble at times. In the sequel, because the developer assumes the players know the reality of him, he takes on a nastier edge, more akin to a traditional game villain than something interesting and nuanced.

And because there’s less mystery about who Monokuma is, the developers clearly felt the need to introduce a new enigmatic animal-style character to puzzle over. Enter Monomi, the rabbit-thing. This character is useless within the narrative and plays very little of a gameplay role either. It’s a rare moment of truly poor writing from this team, but Monomi does her damndest to pull the entire franchise down with her.

She doesn’t succeed with that attempt, however. Danganronpa 2: Goodbye Despair is every bit the worthy sequel to one of my favourite games ever created. Smart ideas paired up with smart writing and an enthralling mystery make for another true game of the year contender.

Persona 5, Dead or Alive 5 coming to PlayStation 4 (Oh, and Dragon Quest Warriors too)