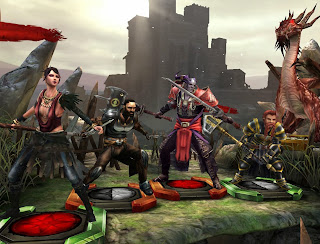 As a big fan of Dragon Age (yep, I even enjoyed the second one), I didn’t really have a choice; when I saw that EA had released Heroes of Dragon Age on to the iOS App Store, I immediately downloaded it.

After playing for an hour I deleted it.

I don’t have a problem with EA putting the investments that it does that it does into mobile market, in fact, when EA does a good job of it I more than welcome it – FIFA 14 is ace on iPad and Real Racing 3 might be laden with microtransactions, but the racing itself is compelling.

I also don’t have a problem with free-to-play mechanics when they work and encourage players to spend a reasonable amount of money without expecting them to take out a second loan on the house. A game like Ubisoft’s Might and Magic Duel of Champions is still, to me, the ultimate example of free-to-play done well, and I don’t begrudge Ubisoft in the slightest for adopting that model for that game. In fact, I don’t begrudge EA’s free-to-play models with games like FIFA 14 and even Plants Vs. Zombies 2 – I didn’t necessarily appreciate the game for adopting that model, but Plants Vs. Zombies is a very broad interest game, so it makes sense to do everything you can to get as many people to download it as possible, and free-to-play is demonstrably the best way to do that.

What makes no sense to me is why EA would take franchises such as Dragon Age and Ultima, which are serviced by a very dedicated fanbase of serious game fans, and release iOS free-to-play games for these titles. It confuses me because I can’t imagine an audience for these games. The existing fans of these games will be (or are already) angry at their favourite franchises being reduced down to microtransaction-friendly gameplay models. Heroes of Dragon Age, for instance, doesn’t even give control over the combat. You’ll buy “heroes” (randomly generated characters that can be purchased with either in-game or real currency), and form a party from them, and then tap the “fight” button and sit back and watch. To say it lacks interactivity is an understatement, and is a far (very far) cry from the rich characters and storytelling and deep combat system of the real Dragon Age games.

No fan of Dragon Age is going to appreciate Heroes of Dragon Age. The decision to make this game wouldn’t be so confusing if EA was going to be able to count on picking up new fans from the kind of casual gamers that would pick up something like Candy Crush Saga. As frustrating as that decision would be for traditional Dragon Age fans, companies have a right to try and make money from their IPs, and I never criticise developers and publishers who make smart business decisions.

But casual gamers aren’t going to pick up Heroes of Dragon Age either. It’s not a casual-friendly IP. People pick up something like Candy Crush Saga because it’s instantly easy to pick up and features warm, inviting aesthetics. But Dragon Age has a darker aesthetic and the screenshots make it look like a serious game. Random people aren’t going to download this, free or not.

So what audience is left for Dragon Age? The same audience that picked up the iOS Ultima and Dungeon Keeper games – long term fans of the respective franchises who will try it and quickly delete it because it’s nothing like the games that they like so much from these franchises. EA really needs to realise that it would be far better served by releasing “true” games in these franchises and accepting that it won’t be downloaded as many times as Candy Crush Saga, but if it was sold at a premium it would likely still be profitable, as I am certain that a lot of Dragon Age fans have iPhones and iPads.

After all, that exact strategy worked for 2K with XCOM. Rather than release a silly freemium XCOM, 2K decided to release the whole console game at a premium price, and it was rewarded with truly impressive sales.

Nintendo and iOS; there’s simply no reason not to