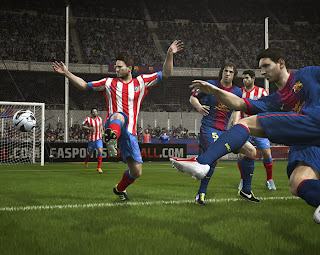 Thank goodness EA got this one right. After the free-to-play travesty otherwise known as Madden 25 on the iPad I was so very concerned that FIFA 14 would be similarly depressing when it was announced to be a free-to-play game.

But it isn’t. In fact, this is EA’s finest free-to-play game yet. Why? Simple; EA didn’t mess with how the game was played in making it free-to-play. Where Madden became little better than a minigame compilation designed to drain money with every action, FIFA 14 allows you to play a proper game of FIFA football. Sure halves are limited to 10 minutes and so you’re not going to be able to play a full, accurate game of soccer, but that aside there’s everything you would expect in a FIFA game.
There’s even traditional tournaments and the manager mode, which have been brought into the game untouched by microtransactions and the like. A single $6 in-app purchase and you’ve got the full game. Microtransactions pop up in the Ultimate Team mode, but they’re nowhere near as aggressive as we’ve seen in EA mobile games in the past, and it is possible to enjoy that game mode without feeling nickel and dimed.
The Ultimate Team works as standard for EA’s sports games. Players collect “packs” of cards that feature players, consumable boosts and so on. The better the player, the rarer the card. They then construct the best team possible out of the cards and take them to the field against either AI opposition or other human players. Trading cards between players is possible too, and all together makes for an addictive and engaging experience. There’s the slightest sense of pay-to-win in that if your friend splashes out $100 worth of cards they’re going to trounce you with superior statistics while you grind away to earn the same thing for free, but it’s hard to begrudge EA for this – this is a quality game and they’ve not locked you out from any content without paying, it’s just that it’s going to take longer to earn it. 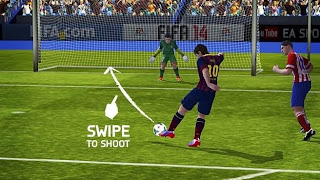 For what it’s worth, other than unlocking the traditional gameplay modes, I haven’t felt the need to spend real money on this game, and I suspect that plenty of people will get endless entertainment out of this game without spending a cent.
I must admit I spent more time in the traditional play modes than the Ultimate Team game for the simple reason that I like my soccer games realistic; I like taking my favourite real world team (Crystal Palace) and doing what they can’t seem to do in real life; win matches. On the pitch the action is great. Obviously you’re not going to get the advanced physics and AI routines that are present in the PC and HD console versions of FIFA 14, but what’s here is adequate, and players can choose between virtual controls and touch-only commands. Both work fine.
It’s the attention to detail that really helps to separate FIFA from other football games out there. There are so many leagues to choose between (though the absence of the Japanese football league is now painfully obvious. It’s a good one, EA, get it in for FIFA 15), and player’s statistics are all carefully modeled. Management options are accessible, but offer enough depth to hold the interest of people that do like to tweak teams. Weekly updates via EA’s servers also adds form into the equation – if your favourite team is performing badly in the real world, then your game’s team’s statistics are going to be deflated a little. For a football fan, this integration with the real world sport is compelling, engaging stuff and more than enough to have them coming back week-in, week-out for more play. 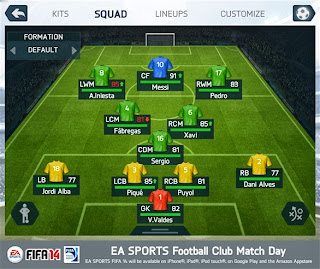 On a purely technical note this is a fairly hefty game for the iPad to handle, and my third-gen device would get uncomfortable after a couple of games due to the heat generated by it. On the other hand where previous FIFA games would feature graphical glitches and limited features, FIFA 14 goes all out, complete with YouTube uploading (check out my awesome goal in the video in this review), and individual soccer players look pretty decent for a mobile game. The only really noticeable absence is the commentary in the default download. Players can choose to download commentary in a number of different languages if they wish, but I rather enjoyed playing to music and the roar of the crowd.
I really can’t emphasise enough just how happy I am that EA saw fit to treat the free-to-play FIFA 14 with enough respect to understand that players will still want a full soccer experience. This is a game I’ll be happy to leave on my iPad for some time to come.

Review: The Legend of Zelda: The Wind Waker HD (Wii U)