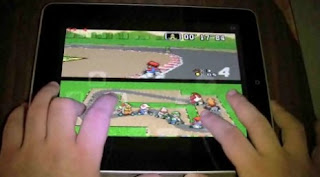 Michael Pachter has riled up the most dedicated Nintendo fan base once again.

The cause for contention was this time over some rather frank and biting comments from Pachter that were reported on gamesindustry.biz, along with the idea that Nintendo should be releasing games on iOS (and Android, but for convenience this piece will just talk about iOS) platforms. After the story was published, my Twitter feed has been inundated with the usual retorts of “Pachter knows nothing” (because apparently not knowing stuff is how analysts keep their jobs at highly respected analyst firms) and “Nintendo should NEVER do iOS.” And why should Nintendo NEVER do iOS? Because, obviously, iOS platforms lack buttons and as such it’s inconceivable that they would actually play well.

Now, I could point to plenty of examples of traditional games playing perfectly well on iOS. But game fans being game fans they’re going to simply ignore subjective opinion and insist they’re in the right, so it’s a pointless debate to have. So let’s assume that these people are actually right and the millions of people happily playing serious games on iOS are all crazy people that have been brainwashed into thinking they’re enjoying these games; the objective reality is that the idea that iOS gaming can’t have buttons is an obsoleted one, and Nintendo would be making a wise business decision to get on board that gravy train.

This year Apple opened up the iOS platform to natively support controller hardware. The iOS 7.0 allows hardware manufacturers to create game controllers that would be supported by the OS without the clunky workarounds that have plagued previous efforts to bring controllers to the iPhone and iPad.

In fact, Nintendo could preserve much of its existing business model by taking such an initiative. Beyond the incompatibility of the Apple hardware prior to iOS 7.0, the other issue that manufacturers faced was the lack of software support for the controllers; who would want to buy a controller when only a handful of no-name indie games are available on it? But if Nintendo were to release a controller with its own games supporting it, that controller would sell well, and suddenly other developers would want to support it too. Nintendo could then charge licensing rights to it, and suddenly it’s got the third party licensing model back.

No one is suggesting that Nintendo should give up on its own hardware business as well; we all want to see a successor to the 3DS and Wii U, but there is nothing but profit to be made by taking the Virtual Console experience and taking it to the iPhone and iPad with a Nintendo iOS controller. No one buys a Nintendo console solely for the Virtual Console, so it wouldn’t be cannibalising its own sales, and it would give Nintendo a marketplace of literally hundreds of millions to sell to that might never consider buying a $300 console, but would certainly consider a $50 controller and a bunch of classic Nintendo games for that iPad that they already own and use for more than just gaming.