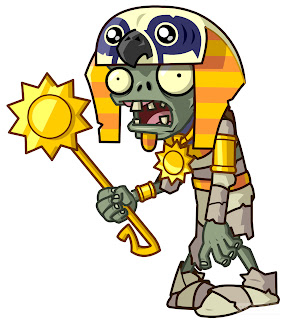 Let me just say from the outset; I’m not actually opposed to the free-to-play model. Understanding that free-to-play does not mean free, I’ve had a great time with those games that I have felt have put the model to effective use in providing players with a basic, entry-level version of the game for free, and then offering those who wish to invest in the game additional perks.

It doesn’t bug me because I do believe that developers deserve to be paid for their hard work, and if these games were actually free, then the developers wouldn’t be making many more of them. With all that out of the way, I do have a problem with free-to-play when it has been forced into a game that was never really designed around the model.

For example: Plants Vs. Zombies. Here is a game that was perfectly self-contained and carried with it a pricing model that allowed players to pay once, and get access to everything the game had to offer. With the monetisation out of the way, the developers were free to simply throw whatever they felt was fun at the players, and the result was a game that was entertaining beyond measure. And because it was so joyful, it attracted a broad audience and it was profitable for the developers, Popcap, despite there being no microtransactions involved whasoever. 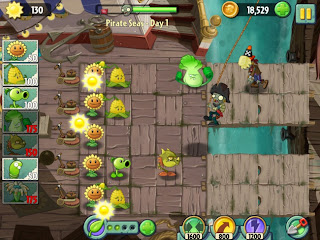 Enter Plants Vs. Zombies 2. Here’s a game where every single design element has been built around microtransactions. I don’t necessarily mean that in a bad way; for instance, I do think Popcap has spent more time balancing this game to make sure players will continue to progress even if they don’t spend a cent of their own money then they have actually making the game. That’s a good thing in principle – it shows that the developers didn’t want players to walk away from the experience having felt nickel and dimed. Where things go wrong is the basic reality that it is so obvious that this game has been so carefully constructed around its monetisation model, and because that is where the development energy went, the game itself no longer has a soul.

Players get access to three worlds (with the initial release…). These worlds are big, bloated and generally become boring well before players get to the next one. The simple reason? They’ve been designed to keep players playing in the hope that they can be encouraged to spend some cash. Rewards are dolled out just often enough to act like a candy trail, and icons litter the playing field reminding players that they’re one tap away from even more goodness. But there’s not enough variety; not really. Just endless streams of levels to play for the sake of playing levels. It’s Candy Crush Saga all over again. 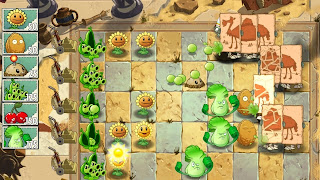 The primary cash sink in the game is in its virtual coins (thankfully there are just a few non-essential plants that are available only through real-cash purchase, and while they’re fun they’re also not overpowered). With those virtual coins players can purchase a major power-up that allows them to personally flick or pinch a zombie horde to oblivion en masse, or they can buy a magic leaf that superpowers a plant for a short period of time.

The game quickly falls into a rhythm then – as soon as a level starts, bring out a sunflower as your first plant (the sunflowers are the ones that produce the light energy that allows you to summon attack plants), then quickly pay for a super leaf to have that sunflower spit out a mass of energy. At that point you’ve got more than enough energy to get a major early advantage over the zombies and level design, and it’s relatively straightforward cruising from there. 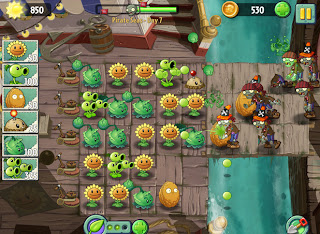 Without the energy leaf the going is tougher initially, and some levels become very difficult indeed without that valuable time and energy at the start to lay the foundations of a sound defence. I’m not going to quite say it’s pay-to-win (especially since it’s possible to grind a few old levels to have enough of the virtual cash to buy a magic leaf, with no payment involved), but it does come dangerously close.

Notice how I’ve spent most of this review talking about the monetisation of the game? That’s not how a discussion of Plants Vs. Zombies should be. I should be talking about its awesome sense of humour, the beautiful, bright visual style, and the perfectly executed tower defence gameplay. All of that is still in the game, buried under the stuff that’s going to annoy a lot of people. It’s still a very, very good game. But because it is so heavily focused on how it is going to make money, it’s hard for me, as a player, to really connect with it.

I really don’t understand why PopCap and EA didn’t simply say “here you go, dozens of hours of fun; give us your $10 please.” It would have been a guaranteed hit at that price, and perhaps, just perhaps, it would have retained its soul.