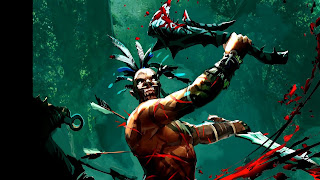 The iPad has led a bit of a renaissance when it comes to collectible card games (CCGs). The large screen and the ability to display the beautiful art of the cards typically have in Retina-quality HD makes it a natural platform for the genre.

Amazingly Magic The Gathering, which dominates CCGs in the “real world,” has yet to offer a true CCG experience on the iOS platform. Sure there’s the Duels of the Planeswalker game, but that’s an arcade take on the genre, providing players with pre-designed decks and limited customisation options.

Duel of Champions is one of Ubisoft’s many attempts at getting a foot into the digital CCG world (there’s also an Assassin’s Creed game), and it’s probably the best one for anyone new to the genre to try and see if it’s for them. For starters it’s quite generous with what you can get out of the free download; play through the tutorials and you’ll have enough in-game currency to buy a couple of booster decks of cards, and generally experience the full game before it becomes necessary to invest real money in it. 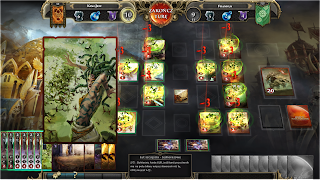 It’s also a well-supported game, and is cross compatible with the PC version – yes people with iPads on the go can play against people sitting comfortably at home. The community seems generally pleasant, though it’s a competitive environment and you’ll need to have the kind of constitution that can handle plenty of losses as you learn the ropes.

The game itself is quite easy to get a feel for. Six tutorial missions will acquaint you with all the necessary systems and rulesets, and then the game lets you loose to experiment with deck styles and the kind of strategies that are typical for most CCGs.

If you’ve ever played Magic the Gathering, then this is very similar, with just enough differences to avoid copyright litigation. If you haven’t; each card represents a creature, spell, or item. Each turn you’ll summon monsters and cast spells, with the general idea being to destroy your opponent’s army before yours is wiped out. The catch is that you’re limited in how many cards you can use each turn, and, being a card game, you’re never sure what you’ll have to work with next. 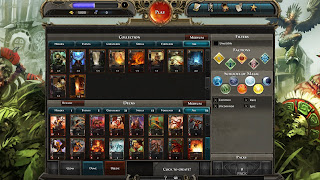 Do you fill your deck with cheap, weak characters and hope to flood the enemy with them to victory before he can bring his more powerful creatures to bear? Or do you try and drive your opponent insane by spells to disrupt his carefully-laid out strategies.

These games are infinitely replayable once they hook you in – every game is different and because the presentation is so gorgeous there’s a real thrill in building a perfect deck. It comes with a catch, though – as with most CCGs, if you want the best decks you’re going to need to be willing to spend money. Using real-world money to buy ‘packs’ of randomised digital cards can be a very expensive hobby – especially if you’re trying to get a specific rare card. It’s a business model that has sustained the CCG industry for some time, but if you’re one of those people that objects to in-app purchases and DLC, I don’t recommend you try this (or any other CCG, for that matter).

It ends up being good value for money, though, since the basic game is so much fun and experimenting with deck design is almost a hobby into itself. The main point here is that Ubisoft, not Wizards of the Coast, is the first to bring a “Magic the Gathering” equivalent game to the iPad.