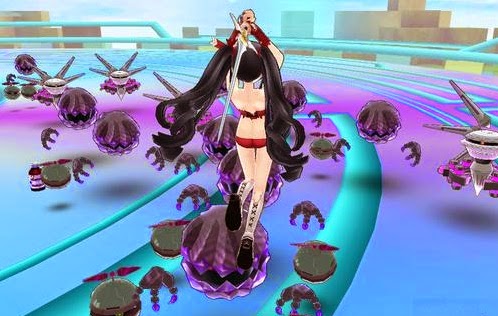 Tamsoft, the developer of Hyperdimension Neptunia U: Action Unleashed, is in some ways the perfect match for Compile Heart’s premier franchise. But in other ways the licensing of the franchise to the developer has resulted in a confused title that doesn’t quite know what it wants to be.

Tamsoft is perhaps best known in the west (in recent years, at least) for having worked on Onechanbara and Senran Kagura titles. It has carved itself out a position of prominence in creating fanservice-heavy brawlers featuring gorgeous women, clothes that tear when so much as looked at, and a healthy understanding of both the grindhouse and exploitation genres. At its best, Tamsoft games are fast, furious, and ludicrous, making the company one of the finer examples of an uber-niche Japanese developer.

Meanwhile, Compile Heart’s Hyperdimension Neptunia franchise is also a fanservice heavy series of JRPGs (for the most part), but unlike most of Tamsoft’s work, it aims to make something of a point of that fanservice. Using its games as a platform to satirise the games industry, the Hyperdimension Neptunia series has a more serious commentary running behind it. So what happens when you squash Tamsoft and this series together? 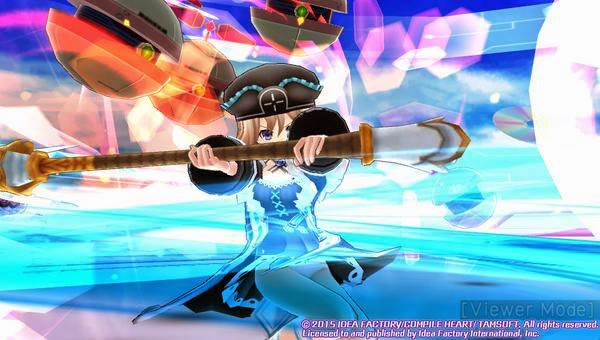 Tamsoft’s direction wins, is the answer. Hyperdimension Neptunia U: Action Unleashed doesn’t take long to stop being a Hyperdimension Neptunia game. While the characters, environments, enemies and music are all pulled from existing Neptunia assets, it is almost immediately evident that the game was developed by a team outside of Compile Heart, while anyone who has played a Senran Kagura or Onechanbara title will be more instantly familiar with what’s going on. Action Unleashed’s dialogue and narrative are threadbare (essentially, the girls are completing quests so that characters based on the Famitsu and Dengeki magazines would write nice things about them), but even that is almost thrown in as an afterthought, and the characters lack the same consistency to their characterisation that we see in the main Hyperdimension Neptunia games.

There is some fourth wall-breaking fun from time to time, such as a cut scene where Neptune complains “Hey, Idea Factory! I thought we had an agreement not to cross this line!” when the characters discover that their clothes can tear from taking damage, but this sense of humour is largely divorced from the gameplay itself, and comes far too infrequently within the narrative to build up a sense of consistent satire. For all the complaints that are levelled at the main Hyperdimension Neptunia games, one of the series’ great strengths is that its gameplay, design, characterisation and narrative all come together to further the chief thematic focus of the game.

There’s also the occasional hint that the game developers understand that the Hyperdimension Neptunia franchise is an ironic deconstruction of tropes to satirical effect. In the same cut scene, Neptune says “Ah-ha! This [the clothes tearing] must be the unique sales point for this game! Bring it on! We’re still be strong female leads!” But again, these moments come too infrequently to build the same strong sense of irony that we’d find in the canonical games within the series, and it’s clear from the outset that Tamsoft’s writers are not up to the same standard that we see from the team over at Compile Heart. 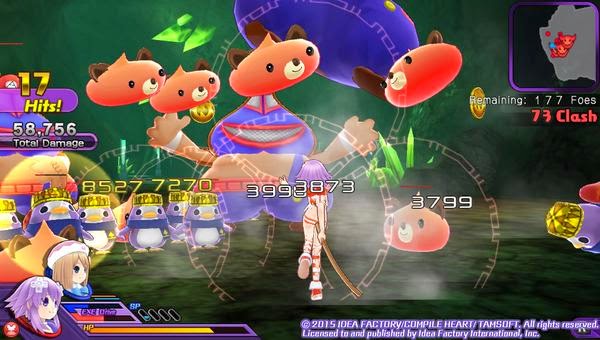 The game also heavily relies on players being fans of the existing Hyperdimension Neptunia series to fully comprehend what’s going on around them. The characters are all able to transform into their powered-up CPU forms, as they are in the main Hyperdimension Neptunia games, but what the the CPU form is, and why they’re able to do it, is never explained within this game’s narrative. Enemies are all vintage Neptunia fare, and range from the Dragon-Quest-slime-like dogoos to the Super Mario Bros. warp pipe. But it’s never really explained why you’re fighting them, and those enemies just horde around the player’s character without any context to them. Of course, Tamsoft is probably right in assuming that the only people that are going to buy into this game are fans of Hyperdimension games, but nevertheless it represents lazy writing to have characters do things that the narrative never puts into context.

Despite the problems with the construction of the narrative, however, Hyperdimension Neptunia U: Action Unleashed is an incredibly entertaining piece of fanservice for existing Neptunia fans, and for all I’ve written above, I really like this game. Tamsoft has a reputation for producing quality action games underneath the fanservice for a reason, and this one is no different. Each character has her own set of weapons and special abilities, and feels significantly different to one another on the battlefield. The special attacks that each has is reminiscent of attacks that we’ve seen them perform in the main Hyperdimension games, and given the screen fills up with as many enemies as you’d expect to see in a portable Warriors game from Koei Tecmo, it’s a real feast for the eyes once the action picks up. After so many games watching our favourite heroines from this series take turns bopping enemies over the head, the different ‘look’ we get from seeing combat happen in real time does help broaden the variety of the Neptunia series as a whole, though, again, that’s only relevant to existing fans of the series.

I reference the Warriors games because the combat is also mechanically similar. Each character has a weak and strong attack, as well as her handful of specials, and the ability to transform into her CPU form, which boosts her statistics, but only for a short amount of time before she’s returned to normal and needs to build it back up again. As with the Warriors games the focus is firmly on attack, with the girls lacking even a block button, but they have a dash to get out of a horde of enemies if surrounded, and on the tougher missions that particular button will get a heavy workout. After a couple of hours you’ll unlock a couple of different, very powerful abilities, but to be honest I found the stuff I started out with to be effective enough, assuming my characters were at roughly the recommended level of each stage. 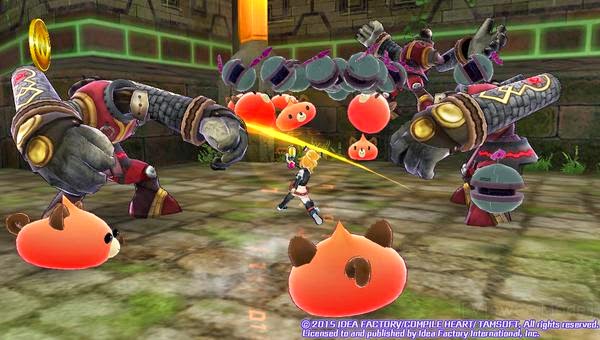 Enemy AI is limited, and difficulty is very arbitrary at times (do a level beyond your character’s level, and they’ll simply take too much damage from enemy attacks to be ‘fair’). This might have turned Action Unleashed into a button masher, were it not for the brevity of levels – which Tamsoft wisely kept to a couple of minutes at a time – and the need to complete “special” missions with some unique restrictions that players need to find a way of compensating for. Action Unleashed remains a razor-focused game from start to finish, and it’s not one that you’ll sit down to for hours a time, but completing a couple of missions per day provides meaningful progress through the narrative, and is a great way to unwind after a long day.

In addition to earning experience points from defeating enemies, the girls earn coins from defeating specific enemy types, and after defeating a certain number of them, those coins can be used to unlock either statistics boosts for all the girls, or a more powerful weapon for an individual. With no shop or loot system in place, these are the only ways to upgrade characters, which is an incredibly light touch for a game that bills itself as a JRPG, but for a game that would rather have you beating up enemies than tweaking a character’s statistics, the system is effective in providing development to the characters, but driving you back out to the field quickly. And as you’d perhaps expect, there are a lot of superficial customisation options for costumes and the like for each girl, and this helps give it the personal touch. There are also some nice unlocks to work towards by completing the game, which I won’t spoil for you in this review.

Action Unleashed isn’t the finest Hyperdimension Neptunia game. It largely lacks the narrative context that drew me into the series in the first place. In that regard, Sting did a far better job in staying true to the franchise with its Hyperdevotion Noire. But what Tamsoft nailed was the core action brawler gameplay loop. This game plays every bit as well as anything else Tamsoft has created, and the Hyperdimension coat of paint over the top is just gravy.

The Friday 10: Ten games too smart for their own good