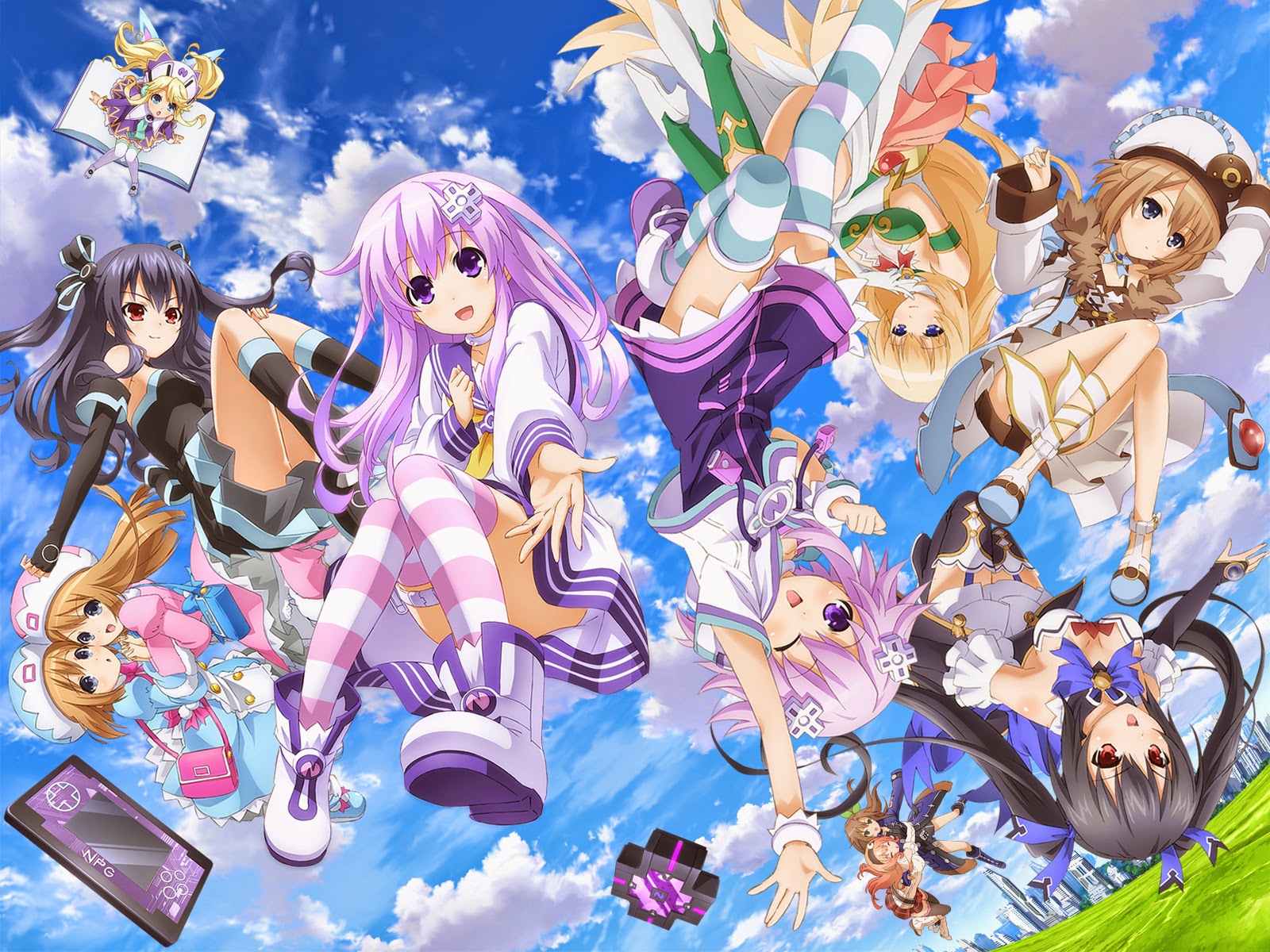 I am so very glad that Idea Factory and Compile Heart saw fit to remake the original Hyperdimension Neptunia. The genesis for the weird and wonderful adventures that Nep-Nep and her strange friends go on is an important game for anyone who enjoyed the sequels. After all, who likes reading a series without the first chapter, or starting to watch a TV series midway through?

The problem is that the original Hyperdimension Neptunia was a truly awful game, with one of the most cumbersome combat systems we’ve ever seen in a JRPG. Critical commands were taken out of the player’s hands, with some very unintelligent AI instead deciding when the party would use critical commands; including such standard ones as ‘heal’. With no way to control such basic abilities personally it was a unique experience to be crossing the fingers and hoping that the AI “teammates” would be in the mood to save a team from annihilation. It was unique, and not exactly pleasant.

(You can also read our review of the third Hyperdimension Neptunia game, Victory, here)

It was possible to mess around with sliders in the options menus to adjust how often the team would use certain skills, but this would have its own issues in having allies start to use skills too often, draining resources on useless enemies. People that love tweaking statistics to try and refine the perfect team balance might have had some fun with this system, but for the rest of us the whole experience felt hands off and offered an odd gameplay structure that was both frustrating and decidedly boring. 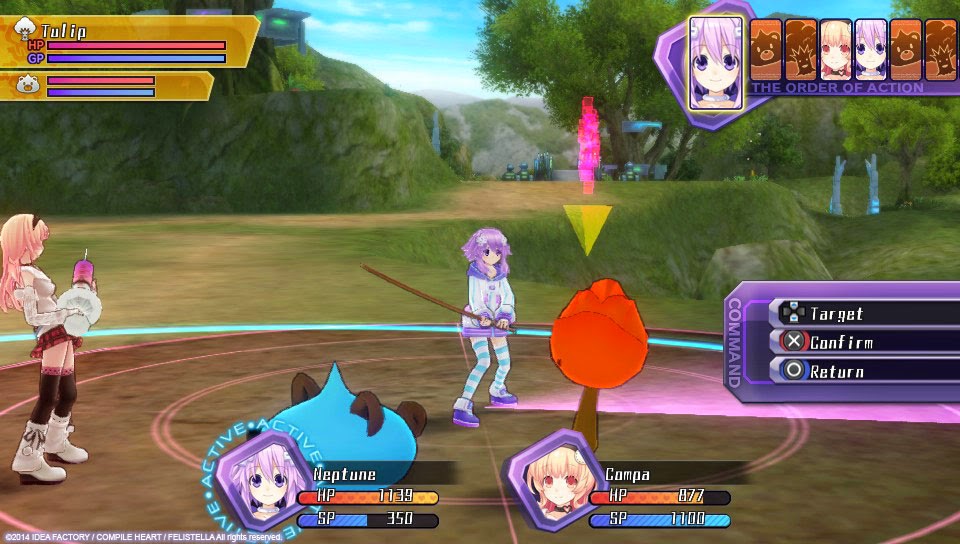 So I’m happy to say that Hyperdimension Neptunia RE;Birth 1 is a remake that has been able to fix everything that was wrong with a good idea executed poorly. With RE;Birth 1 Compile Heart has taken the time to update the combat system so that it more closely resembles the enjoyable and dynamic system that we saw in the two sequels. Now players have complete agency over what their characters do in battle, with the ability to move freely around the combat area, select skills on their own terms and generally come up with more complex strategies that don’t rely on AI behaviours.

But Compile Heart’s updates extend further than that. The team has also taken the time to rejig the narrative so that it more closely resembles what happens in the sequels. Lesser characters that haven’t played leading roles in subsequent games have been dropped from the lineup. The story will remain familiar to those who have played the original game, but holds enough surprises to also amuse them. As far as remakes go, RE;Birth 1 is every bit as worthy as other recent rejigs, such as Atelier Rorona.

Despite being an almost wholescale remake in many respects, RE;Birth 1 remains every bit the Hyperdimension Neptunia game. Because the game’s design is so distinctive, this in turn means it’s going to put many players off before they even start playing, as it means players will be experiencing an otaku sense of humour, meeting otaku character design, and all the silliness that comes with this. 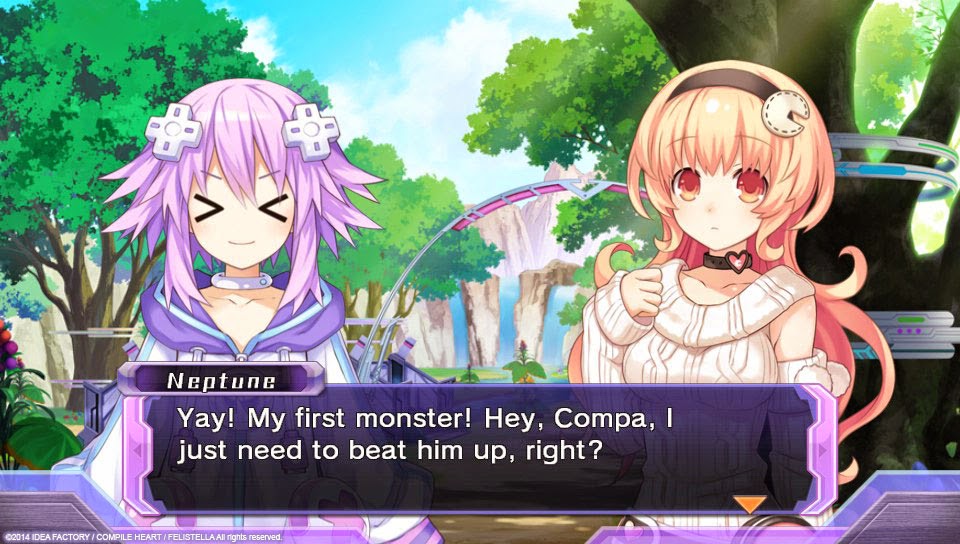 However, in pre-empting many of the criticisms that this game will inevitably attract from other press outlets, I’ve got to say that the mainstream’s continued demonization of the Hyperdimension Neptunia series is completely unjustified. Were the series to continue to follow the path laid out in the original Hyperdimension Neptunia then sure it would be reasonable to criticise them for the gameplay weaknesses that I outlined above. But this hasn’t been the case for this series from the second game onwards. Hyperdimension Neptunia is a series that has gone from strength to strength in terms of its gameplay and mechanics, and has become an example of a genuinely good, albeit structurally traditional JRPG franchise, bound by a series of highly satirical and entertaining narratives.

For those that haven’t experienced these games before; the Hyperdimension Neptunia series represents the video game industry and its major corporations as a group of more-than-slightly insane character archtypes, with each character behaving according to the way that the companies that they are modelled after behave in the real world. Seeing Nintendo, Sony, Microsoft and SEGA all represented as adorably moe characters never ceases to be entertaining in an oddly endearing way.

Far from being mere comedy pastiches, the characters of Hyperdimension Neptunia exude charm that gives them a life that has meant they’ve developed fan bases independent of their inspiration. Given that they’re beating up on some of the most surreal interpretations of video game tropes, it’s easy to become lost in the abundance of energy, colour and humour that each game in the series presents. As with its predecessors RE;Birth understands that it doesn’t benefit from overstaying its welcome, and the sharp clip in which the narrative plays out might put off people more used to the epic narratives that so many JRPGs aspire to. 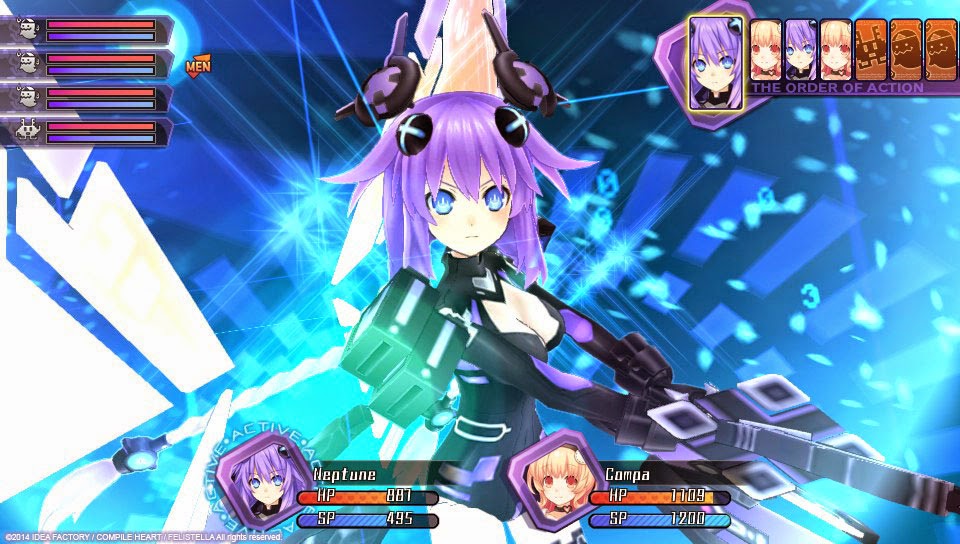 As a further criticism, as with its predecessors RE;Birth demonstrates that through its entire history Compile Heart has never quite mastered the art of balance in a JRPG, and it has a habit of alternating between easy to the point of being dull to being somewhat intimidating, with nary a warning that the difficulty spike is coming. And as a further warning to newbies, Compile Heart has also never been especially good at explaining how players should grapple with its often abstracted and regularly complex gameplay mechanics.

But it’s worth sticking with and learning the systems for the first couple of hours of gameplay, because where Compile Heart does excel is in terms of raw vision and panache. This is a franchise that has always dared to push boundaries in all kinds of directions in order to parody the games industry. Nothing is sacred; from console manufacturer politics through to prepubescent sexuality as the series continues to parody the games industry, idol and otaku culture, and JRPGs in general. Others criticise these games for what they depict, but like with an episode of South Park, I defy anyone to play one of these games and not laugh – even if that laugh is half accompanied by a grimace.

RE;Birth 1 is a damned fine JRPG. It’s silly, it’s charming and it’s irreverent, but it’s also a package that’s been wrapped up in a clever, rich combat system. This was the start that the Hyperdimension Neptunia franchise deserved.