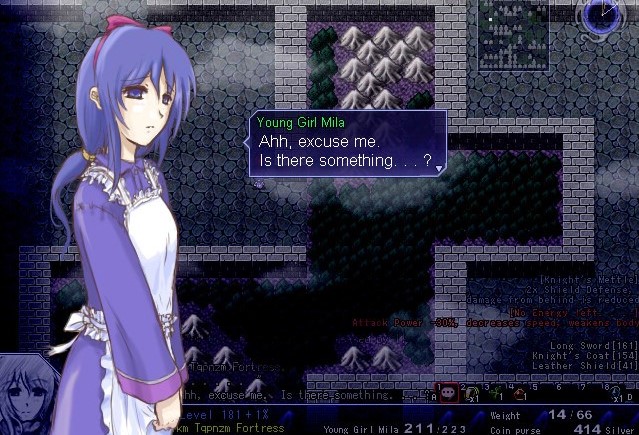 One Way Heroics has been around for quite a while now; the English localisation was originally released way back in 2013 on PC, and then Spike Chunsoft stepped in to create their own spin on the formula with the excellent Mystery Chronicle: One Way Heroics on PlayStation Vita and PS4. Playing the original on Nintendo Switch (with the “Plus” in One Way Heroics Plus representing a DLC-enhanced “complete” edition) does feel like a step backwards from Spike’s effort, but it’s still a very fine roguelike.

The biggest issue with the game on console is simple; everything displayed on the screen is uncomfortably small. The text is almost unreadable when playing on TV, and you’ll want to hold the console close to your face when in handheld mode. Poorly-optimised font size is unfortunately not uncommon with the Nintendo Switch, but here it’s more than just that; the character sprites, environments, and everything else about the game is also tiny. While it’s all playable, it’s also a little hard to get a sense of character or setting when the character is about four pixels tall. For a game in which playing around with different character classes is core to the experience, the lack of personality and differentiation as a result of the tiny sprites is a bit of a disappointment.

It’s worth persevering with, though, because One Way Heroics is also one of the loveliest implementations of the classical roguelike formula. Instead of wandering through one randomised dungeon after another, in One Way Heroics you’re instead journeying across great swathes of plains, deserts, volcanic and snowy regions. You’ve got complete freedom to travel around these spaces, which are fully randomised and filled with dungeons to explore, towns and shops to visit, and enemies to fight. 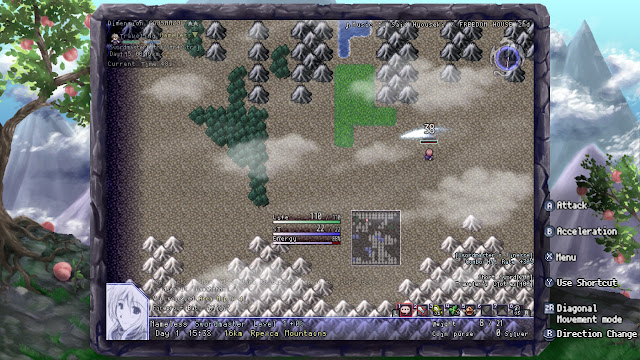 There’s just one catch to this freedom to explore: there’s an unstoppable doom rolling in from the left-hand side of the screen, forcing you to endlessly move to the right. With every couple of steps your hero takes the doom rolls one more “square” across the terrain. It’s easy to stay ahead of the creeping nihilist nightmare… as long as you’re able to keep moving forward. Stop a couple of turns to clamber over a mountain or push through a river, and the doom will roll on closer. Decide to go exploring a dungeon for loot and experience and you better hope you’ve calculated the number of steps back to the exit and won’t get caught by some winding pathways, tough enemies, and walls.

The tension is that you’ll feel like you need to delve into those dungeons because they’re full of treasure, but also, more importantly, enemies to fight for experience. A demon lord awaits you at a set distance from the start of your journey, and that monster is difficult to take down; you’ll want every bit of experience and special abilities that you can gather form the opening step of your quest to have a hope of taking him down. And so success in One Way Heroics is very much a balancing act of exploring as much as you can while making sure you’re also pressing towards and planning your way around so that you’re not running into too many obstacles.

Given that the roguelike formula is so dreadfully overused these days, I do find the alternate spin that One Way Heroics has on the genre to be appealing – and it comes across as fresh because it’s one that not many other developers have attempted to replicate. The shift in perspective to those wide-open places to explore does give the game a different kind of pacing. The fact that you won’t be able to explore the entire world is also a shift to standard roguelikes, where you’re actively encouraged to visit every spot in every level that you can. It’s not the perfect implementation, of course. The random nature of levels means that it’s entirely possible to miss out on important dungeons and other opportunities simply because you decided to zig rather than zag with your exploration, and the game provides no hints about where these key locations are placed. There’s a map item which will highlight them on the mini-map, but without that, you’re relying entirely on luck. That being said, imperfect as it is, the additional sensation of scope and journey is a breath of fresh air to the narrow, confined environments of most roguelikes. 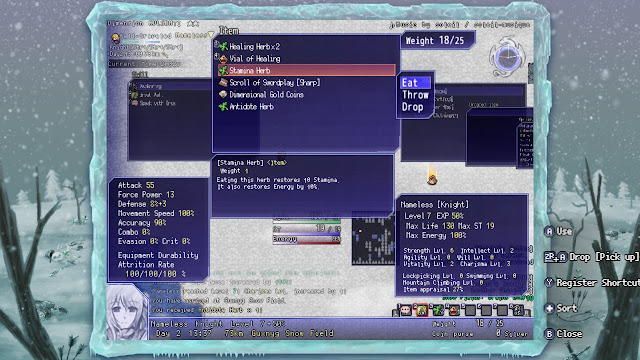 Everything else about the game is standard roguelike stuff; you need to manage your hunger level (ideally you’ll luck across some fruit trees along the way), and you’ll find a lot of unidentified items that you’ll need to use identify scrolls to determine whether they’re useful, or cursed. There is permadeath, though you do have the ability to save a limited number of items between attempts to try and make subsequent attempts a little easier on you. By now the classical roguelike formula is pretty firmly established, most people have experienced it in some way or another, and they know whether it’s a structure for them or not. One Way Heroics Plus certainly isn’t going to win any new fans over – it’s very much one for the genre hardcore.

This is the kind of game that’s so easy to overlook. Lacking things such as overwhelming charm of a Chocobo Mystery Dungeon, the exquisite fan service of an Omega Labyrinth, or the sheer depth of a Siralim, One Way Heroics Plus lacks an X-factor that allows it to stand out. If you are a roguelike fan and give it a chance, however, it has its merits. Those merits are buried deep under poor optimisation for the Nintendo Switch, sure, but they’re there, and for the persistent and patient, this is an enjoyable, rich, challenging example of the classical roguelike.

The third Anima game has been announced