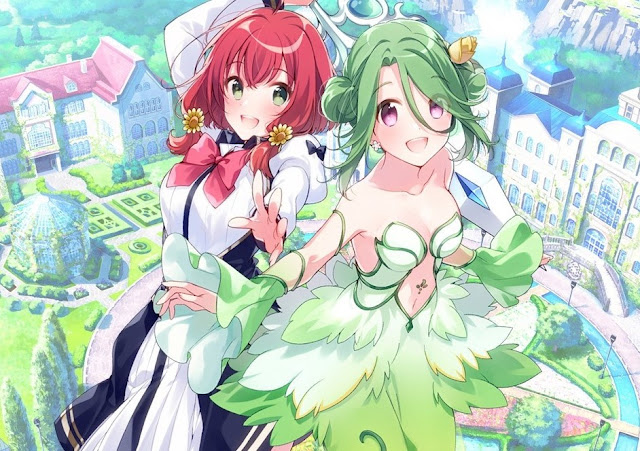 After PQube games pulled the initial effort to localise Omega Labyrinth, we all thought this series was done for in the west. Having run afoul of Sony due to its rather outrageous fan service, the game and its “censorship” certainly drew opinions and debate. Thankfully all seems to be right in the world now as the series has ended up getting a second breath of life with D3 Publisher bringing it to Nintendo Switch (and a heavily modified version of it to PlayStation 4).

Omega Labyrinth Life is a really odd title, because it’s both really, really good and really, really not. Developed by Matrix Software, it plays just like you would expect from one of the most experienced and revered JRPG developers out there. Matrix was responsible for those excellent 3D remakes of Final Fantasy III and IV, niche hits like Final Fantasy: The Four Heroes Of Light, Avalon Code, Alundra and Nostalgia. Matrix Software has been producing JRPGs since 1997, and as such it should not be surprising that the JRPG bits of Omega Labyrinth Life play out really nicely.

Omega Labyrinth Life is a Mystery Dungeon-style roguelike, and anyone who has played Shiren the Wanderer, Chocobo Mystery Dungeon, Pokemon Mystery Dungeon, or any of the other dozens of others to be pulled from the same cloth will know exactly what to expect. It’s a timeless formula, in which players need to delve into dungeon level after dungeon level, with the layouts being randomised so that each time you go for a delve you’re experiencing something different. The developer has (wisely) opted to leave the basic structure largely untouched, and so, as is typical for the genre, the dungeon crawling segments are colourful, challenging, charming and simple, but effective applications of turn-based JRPG action.

Outside of the dungeon crawling, anything that contributes to the gameplay is also really good. For example, there’s a garden full of flowerbeds that you need to manage by planting seeds, choosing the right water for them, and then harvesting the produce. There’s a Harvest Moon-like zen to this, as it’s fairly time consuming and hardly action filled, but its cathartic to watch the flowers bloom and then experiment with different waters and items to see if you can produce different results the next time around. You’ll need this produce to complete a lot of the side quests and have the resources to build up the academy that forms your base of operations, so its’a system you won’t want to ignore.

Together, the crawling and farming account for about 70 per cent of the Omega Labyrinth Life experience, and it’s all good there. It’s the fan service that doesn’t add anything to Omega Labyrinth, and that’s an amusing plot twist, given that fan service is all anyone can talk about with this one. There is plenty of it, for a start. One of the core features of the game is that as you defeat enemies, you collect a particular kind of “energy” which will make your character’s breasts grow bigger. Functionally this works out as nothing more substantial than a second leveling up system, beyond the experience levels. As such, there’s no reason that this system could have taken another form. The breast growth is a purely aesthetic addition, and it’s not implemented in a particularly inspired way: the little cut scenes of the girl’s boobs magically getting bigger are only passingly amusing the first couple of times.

That’s the least extreme example of entirely pointless fan service in Omega Labyrinth. Whether it’s the instance where you need to rub a cylindrical tube between one of the girl’s boobs in order to identify the properties of an item (yes it looks just like the mental image you’ve probably got), or play scissors/paper/rock by grabbing both boobs and pushing them in a particular direction, Omega Labyrinth Life is filled with minigames and scenes featuring boobs that don’t actually add anything to the game. If anything they make the minigames more cumbersome and irritating than they would be otherwise. In any other JRPG you identify an item not with a fake instance of breast sex, but rather a two-second process of using an item out of a menu. Rather than just select “scissors” from a menu to play scissors/paper/rock, here there’s a laborious process to push one boob up and pull one boob down. It’s… odd and almost surreal to have something that blatantly throws counter intuitive mechanics into a game exclusively for the purpose of fan service. Most other games put some kind of effort into justifying what Omega Labyrinth never does. 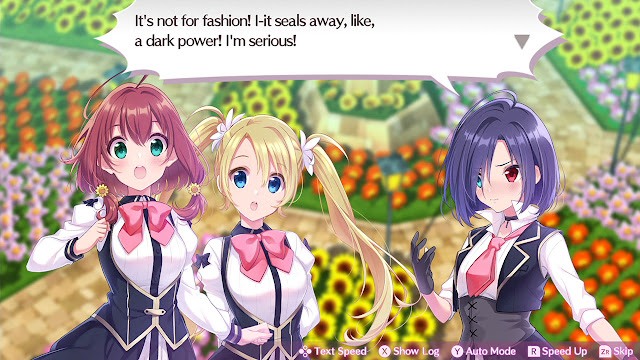 I feel like this is why D3 Publisher pushed on and produced a PlayStation 4 version of Omega Labyrinth anyway. Stripping back the fan service stuff doesn’t actually do anything negative to either the gameplay or the narrative. If anything actually improves it, and if people didn’t know that there was a more extreme version available, I don’t think anyone would have come away from that PlayStation 4 version thinking something was missing. Of course, the Switch version is uncut, which is great for people that do care, but it really does need to be emphasised that almost all the fan service is almost entirely superfluous to whatever point and artistry Omega Labyrinth is driving at.

There is one exception. Every so often you’ll come across a hot spring, and a quick dip in there will restore your character to full health. The little cut scenes that play out are a time-honored part of fan service in anime, are well drawn, and because they draw the focus away from the boobs to the entire character, actually come across as more interesting, if not actually sexy.

I’m a big fan of fan service, as a rule, but also as a rule I prefer it to have some point within the context of the game. Dead or Alive’s pin-up aesthetic makes the fan service much more interesting (and sexy), for example. D3 Publisher’s own School Girl/Zombie Hunter or Onechanbara both use fan service as part of the homage to B-grade exploitation horror. Other games can be chalked up as “fan service” but are really just games that bring sex themes to the foreground as part of the overall narrative point – think of the empowerment fantasy of Bayonetta, or the intimacy of the Nights of Azure titles. Fan service used in the context of humour and satire is great, too: Tsunako’s work in the Hyperdimension Neptunia series, or the nonsense upskirting in the Gal*Gun series are both hilarious, and the respective games would simply not be what they are without them.

Omega Labyrinth doesn’t really do any of that, though. The plot is almost shockingly mundane and lacking in any kind of sex themes to back up the visual fan service. It tells the story of an ensemble cast of girls at an exclusive college that are tasked with restoring what is meant to be an everlasting garden that has, for some reason, started to wilt. There’s the vague impression that the writers specifically chose the wilting garden theme to allow them to run with the “blooming” motif and tie that into the exponentially growing breasts gameplay mechanic. However, the closest the game ever comes to actually doing something of substance with that is the minigame where you need to “stimulate” the girls in a greenhouse (because that’s where flowers grow, you see). It’s a very shallow effort at metaphor at the best of times.

The lack of any kind of purposeful narrative would be fine if the game had fun characters, but Omega Labyrinth Life doesn’t bother there either. Each of these girls is a walking pair of giant jelly cups with perennial smiles plastered over their faces (aside from one girl, who’s got a permanent scowl, and another, who is rich and worried 24/7). None of them have particularly endearing mannerisms or personalities and, frankly, none of them are particularly interesting in design either. This isn’t a consequence of fan service – all the above fan service-heavy games I mentioned above give their characters distinct and interesting personalities. Omega Labyrinth’s problem with its characterisation is that it doesn’t go much further than characters having kumbaya moments before some horribly contrived plot hook popping up to tell them to either take their shirts off or get back into the dungeon, and the girls saying “yay! Sure!” and doing just that. I can’t even remember the names of most of the cast, and I need my fan service to be so much sexier than this before I’m okay with characterisation so shallow that I don’t remember names.

None of this is to suggest that Omega Labyrinth Life isn’t hugely enjoyable. Really, it plays so close to the Mystery Dungeon tradition that, as a rabid fan of Shiren, Chocobo Dungeon and the others, I was always going to enjoy this. That dungeon crawling side of the game does make up the bulk of the experience and the otherwise pleasant presentation does make Omega Labyrinth a premium example of its particular genre. It’s just a pity that it doesn’t do more to make something of that fan service and really justify the controversy that it attracted.