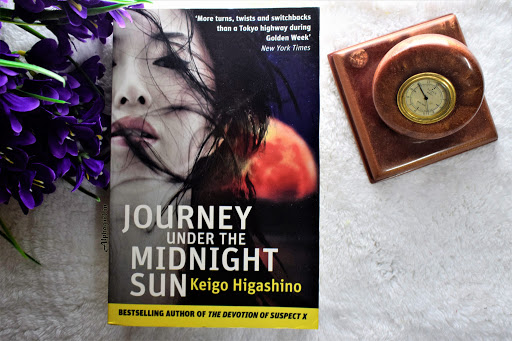 Have you heard of Higashino Keigo? If not, you’ve not delved deeply enough into Japanese crime fiction writing. Higashino has published something like 66 novels (and that doesn’t count his many short story collections), and of those, some 20 have been turned into television series’ or film. His work has been published in eight languages, though, of course, he remains incredibly niche outside of Japan, because western audiences like their crime fiction to be more Law and Order-flavoured. I’ll leave you to figure out if I think that’s a positive reflection on western tastes.

Putting aside that digression, if you’re a fan of crime writing, you really owe it to yourself to read Higashino. On that note, Journey Under The Midnight Sun is the place to start. It’s a sprawling book (most of Higashino’s novels are not in excess of 500 pages like this one), but while that might seem long by standard expectations for the crime genre, there’s a very good reason for it.

Journey Under The Midnight Sun isn’t really about the detective process, see. There are various “detectives” that try and piece together what’s going on over the course of the narrative (whether they be with the police, private investigators, or normal people), but the story isn’t focused on figuring out whodunnit. Rather, it’s about giving the reader pieces that slowly form a picture of crime and villainy. It’s obvious that something’s up with certain characters within the first 100 pages. By the 250 page mark you know without a shadow of a doubt that two particular characters are at the centre of it all. However, just what “it all” looks like, how it’s coordinated, and the machinations with which these two characters operate is where the mystery lies and there are some real surprising moments in the book, right through to the end, as the revelations come.

Indeed, there’s one particularly shocking revelation which manages to turn these two into sympathetic characters. They’re still the villains, but in other ways they are also victims. The villainy isn’t a mystery. How they were victimised is, and that’s a pretty neat reversal of how crime fiction generally works. Generally we know who the victims are, and how they were victimised, and the goal of the audience is to follow along with the plot to try and work out who the villains are. Those kinds of stories have become so common that it has become easy to pick. Here, though, I wasn’t able to pick how the final revelations fell into place with this book, and that’s perhaps because the structural expectations of the genre have been reversed within it. 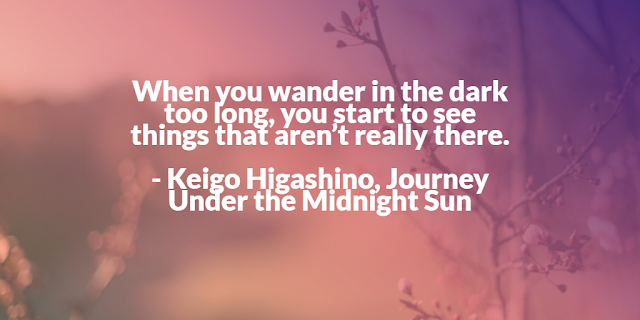 In general, Journey Under The Midnight Sun is a structurally fascinating book. Though the story is almost entirely focused on these two characters, we only ever get to experience them, in passing, through the eyes of the medley of characters that get caught up in their machinations. It’s how Higashino maintains the mystery, with each new character offering a couple of new insights into what’s going on, but it’s all one step removed, and only ever contributes to one elaborate jigsaw puzzle. For the longest time the picture simply doesn’t form. It is almost frustrating because, again, Journey Under The Midnight Sun is a very long book, but the delayed gratification in finally understanding the full picture is all the more worthwhile for it.

Unlike many other Japanese crime fiction greats such as Kirino Natsuo and Nakamura Fuminori, there’s nothing particularly literary about Higashino’s writing style. In fact, one of the reasons that I suspect TV and film producers regularly turn to Higashino is because his work is remarkably easy to translate directly into visual media. With efficiency and minimal embellishment, Higashino describes conversations, events, and results, without any particular desire for philosophical digressions or genre-bending. The author claims to be most heavily inspired by authors such as Matsumoto Seicho and Edogawa Ranpo, and that heritage is evident in his own work. Journey Under The Midnight Sun is a long read, but a highly accessible one that is particularly undemanding of the reader.

With that being said, as a genre work, Journey Under The Midnight Sun is written beautifully. Characters are distinct and interesting, and while descriptions are efficient, they’re not minimalist – Higashino is a great short story writer and knows how to paint a picture at rapid pace. There also a touch of the neo-noir to the book, which helps build atmosphere and tone. For example, the reason that we know that one of the two protagonists is a villain is because she’s written up in a particularly femme fatale manner: “She was pretty, he had to admit, with very delicate features. But there was something else, too. There are thorns in her eyes—that was the only way he could express it. For a moment, he thought she might have felt left out because he spoke to her friend first and not to her, but as she smiled, he realised the thorns were always there. A true lady would never have eyes like that.”

Though it’s not philosophical, the book is also a reflection on many of the more traditional elements in Japanese society. The traditional and heavily patriarchal design of the traditional Japanese family unit, for example. The highly protective attitude of Japanese businesses towards intellectual property (the book being set in the 80s, as software became an asset that Japanese law would subsequently protect). The bulk of the crimes being committed transgress these more traditional values – i.e. it’s the bad guys stealing software and the woman looking for a life beyond the role of housewife is the dangerous one – and in this way Journey Under The Midnight Sun skews in a generally conservative direction with the values that it espouses, though that’s by no means unusual for this particular genre, particularly when you consider that it’s borrowing so heavily from classical elements of the crime and noir tradition.

More to the point, though, Journey Under The Midnight Sun a fun, dynamic page-turner of a book. It’s an easy read, despite its bulk as a book, and paints vivid characters and a labyrinthine mystery. It’s always interesting when an author eschews the standard expectation that the “whodunnit” will be at the centre of the book. Here, there’s no real question about that. All the questions here are the “why’s”, and I would suggest that those are more interesting questions to ask, anyway.