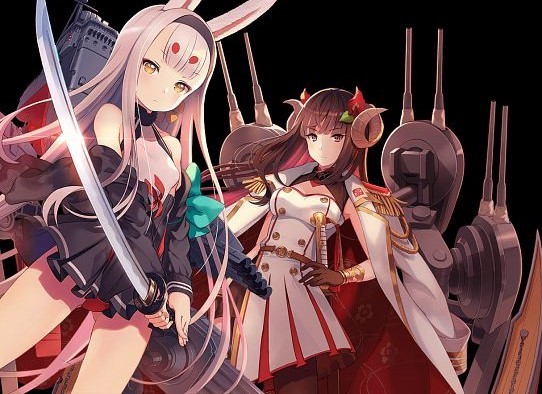 Azur Lane is one of those explosive media properties that seems to be on an endlessly upwards trajectory. It was, originally, a little sidescrolling shooter game made for mobile. Those are a dime a dozen of course, but thanks to a very large roster of very cute anime girls, it should come as no surprise that from those humble roots, Azur Lane has since grown to include manga, anime and, now, a console release. It might not have quite the presence of the likes of Fate just yet, but Azur Lane is a similar kind of success story.

Azur Lane Crosswave is Compile Heart in its most comfortable space, offering players a simple combat system, backed by extended visual novel-style narrative sections that focus on humour, and detailed character art that goes heavy on the fan service. Being upfront here; there are so many panties in this game. And so many plus-sized boobs. And so many impossibly-short skirts. Azur Lane’s character design covers the entire gamut of what we’ve seen from Compile Heart master in the past, from the loli and the cute through to the beautiful, and then the almost grotesquely overly proportioned. And, just like with Compile Heart games in the past, the consistency of the quality between those character designs is truly impressive. Every one is drawn with such an impressive eye for detail, and an understanding of where to draw the line short of crass. Furthermore, the creative variance between each of the characters results in a vivid stable of designs, and really helps to give Azur Lane a strong personality. There are a lot of characters in this game, and one of the best reasons to keep pushing through the narrative is to enjoy all the new characters that you’ll get introduced to.

It’s just as well that the characters are as good as they are, because you’ll be spending a lot of time reading text and those pictures “talk” to one another and… I’m still not sure I enjoy the narrative beyond the characters as much as I wanted to. I think part of the issue is the localisation. Usually Compile Heart localisations are of a very high standard, but while this one it technically fine, it seems to struggle with a few too many literal translations from Japanese… or there just wasn’t much material for the localisers to work with. Azur Lane, like so many other mobile-first titles, doesn’t do much with it’s narrative. It’s there for the sake of content, but doesn’t push for any particular themes of substance. Over the last year or so we’ve seen Idea Factory really start to push narrative with purpose, and while Azur Lane is restricted a little by the base material, it’s hard not to be a little disappointed that beyond the gorgeous characters is something a little hollow. 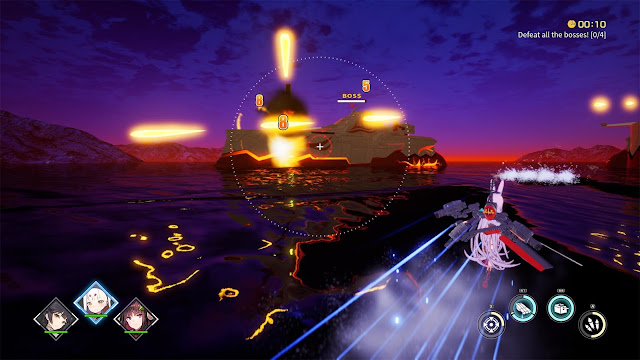 The plot itself is quite nonsense, too. In Azur Lane, each of the girls are actually personifications of real-world battleships, from cruisers right through to aircraft carriers, and really, the plot is an endless excuse to have various combinations of characters squaring off against one another. It’s fun, don’t get me wrong, and Azur Lane’s over-the-top humour is vintage Compile Heart. It’s just that the narrative doesn’t feel as cohesive or interesting as I would have liked, especially when there’s so much of it that a good portion of the experience is reading through it.

Combat missions tend to be fairly brief affairs, taking place in small arenas, where you need to use a combination of your character’s mobility to weave in and out a combination of enemy attack patterns, while also getting some of her own shots in. The game was pitched as a 3D remake of the SHMUP action of the original mobile game, and it very much feels like that. It’s not too deep into the game where the levels become a true bullet ballet, and that both meant that I was wowed by its energy and style, and became quite terrible at playing it. That’s not the fault of the game, though. Controls are smooth and responsive, and the action is clean. I’m just really that I really struggle to grasp how to do well at this particular genre.

Thankfully, with perseverance, just about anyone should be able to make their way through Azur Lane. There are grindy elements to the action. Characters level up, and there are all kinds of resources that you can acquire to enhance equipment. Initially these elements are quite limited, but as you start unlocking new characters (which themselves cost a currency resource which you grind up through play), and mixing and matching up parties, staying on top of the curve can be a tiring process. With that being said, once you’ve found a mix of characters that you like to bring into your party, then there’s not a pressing urgency to keep changing things around. Characters do have some advantages and disadvantages, based on their class (some have a shield action, while others can summon aircraft into the sky), but the action never really calls for specific combinations. Those occasional missions where you’re locked out of using your favourite character can be a bit of a drag, but on balance progress through Azur Lane is not a crawl, even with the grind. 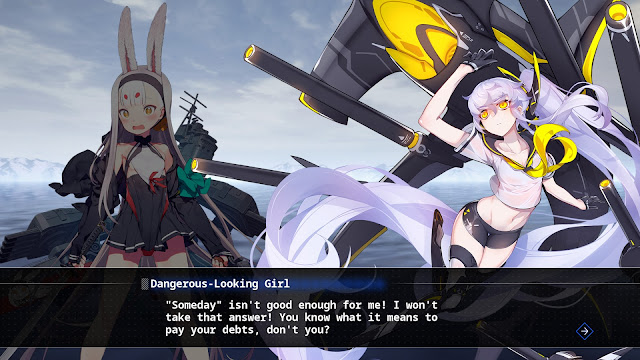 Really, the biggest issue with regards to the gameplay is the environments themselves. There’s one major issue when it comes to battles on ocean: there’s not exactly much terrain. Meaning that you don’t get to play stealthy, or hide behind walls, or have the environmental tools that would allow you to out-maneuver your opponent. Azur Lane Crosswave doesn’t even model the impact of waves and the like on boats, so in practice the combat arenas are simple, empty circles. Unlike games about dogfighting in the air, there’s no need to account for elevation and turning speed, either. What’s left is simple, twitch action, and while it’s visually appealing and exiting, over time the lack of strategic depth and nuance does become noticeable. With 2D SHMUP-style games this isn’t an issue. With a 3D action thing, though, player’s expectations are different.

As one final issue, is that there’s a bit of a disconnect between the humour and fan service in the narrative itself, and what goes on in the action side of the game. I was expecting all kinds of fluttering skirts and bouncing boobs in the “super attacks,” and for the characters to quip on wildly as they took down enemy ships and bosses. However, there’s not all that much of that here. If you were to break out the combat alone and look at it in isolation, Azur Lane wouldn’t have a great deal of personality at all. So, while it plays well, the developers missed the opportunity to make something distinctive of the action.

These are all mild criticisms that don’t take away from all the great that Azur Lane Crosswave is. It’s a clean, snappy, hugely entertaining game, and an excellent next step forward for the emerging property. You’ll want to have a high tolerance for fan service, but it’s a Compile Heart game and you should already know full well what to expect going in. What’s important is that it’s all executed so well that Azur Lane ends up being too charming to put down, and there’s more waifu bait in this one than any other game you’ll play in 2020.

A Japanese book you should read: Journey Under The Midnight Sun