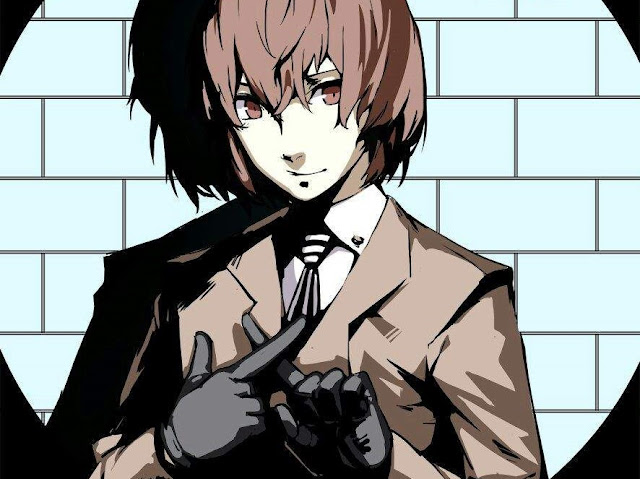 We talk a lot about Japanese games, films, anime and manga in western culture, but we talk about Japanese literature far less frequently, and that’s a pity, because as with all those other mediums, Japan has produced many of the world’s finest writers, and literature gives you a real insight into culture and mindset. So I’m going to start a series where I recommend authors, both well-known and not, for people to read.

First off, I’m going to talk about Edogawa Ranpo (1894-1965), who is perhaps not the best-known Japanese author, but his work has special significance to gaming at the moment, thanks to Persona 5. Ranpo was a specialist in crime fiction, and as you’ll see in a moment, a lot of Persona 5 is a direct reference to his work.

An avid fan (and translator) of Arthur Conan Doyle and Edgar Allan Poe’s mystery stories, Ranpo’s style is very much in the vein of those authors; he liked throwing up mysteries that seemed to have no solution, and then have a genius from outside of the formal police forces to come in and solve the mystery. As with Conan Doyle and Poe, his “heroes” were rarely perfect heroes, and he had a favourite character that he would regularly use for his stories; Kogoro Akechi. Akechi was indeed the first recurring detective character in Japanese fiction, making him part of the same tradition of Sherlock Holmes, Hercule Poirot and Miss Marple.

You could almost say that Akechi is derivative of Holmes. As with Holmes, Akechi is a master of disguise, has a unit of young boys that he uses to gather information (the Boy Detectives Club, rather than the Baker Street Irregulars), and indulges in vices such as smoking.

That being said, there are some significant differences between Akechi and Holmes. Akechi’s great opponent is known as the ‘Fiend with Twenty Faces’, who is a generally non-violent thief that’s in the game for the thrill of it, and Akechi and the Fiend do view their rivalry as a great game. There’s also a greater sense of both the supernatural in Ranpo’s stories than Conan Doyle’s.

The biggest difference is, of course, that the stories come from a Japanese author, and therefore are infused with a distinctly Japanese approach to thinking. Conversations have That uniquely Japanese dynamic around social status playing out in the background, and the idea of horrific crime to the Japanese is in some ways different to what we’ve got out this way. There’s also a greater sexuality in Ranpo’s writing; with the Japanese less conservative about these things in general, sex is a topic explored more freely in these stories.

As for the link to Persona 5; consider this quote:

“The people of the capital were in a panic, and their days were uneasy. The local news pages were filled with the matter day after day. That day three-column articles with big headlines like “The Elusive Phantom Thieves” were written in the usual sensational fashion. I, however, had already grown accustomed to such articles and they did not particularly attract my interest. But below that article, among the various reports of the Black Hand Gang’s victims, I was shocked to discover a twelve- or thirteen-line article with the small headline “Mr. X Assaulted.” You see, Mr. X happened to be my uncle. The article was brief, so I could not make much out, but it seemed that his daughter, Fumiko, had been abducted by the thieves, and that ten thousand yen had been taken as ransom.”

It’s no coincidence that Persona 5 casts players in the role of a group called the Phantom Thieves, and that one of their chief foils (at first…) is a boy detective called Akechi. Ranpo is an incredibly well regarded author in Japan, and there are many anime that also take inspiration (or direct themes) from his work. So, while Persona 5 itself isn’t a retelling of Ranpo’s stories, there is that spirit of adventure and mystery which he, in so many ways, pioneered.

The literary influences on Persona 5 go a fair way of explaining some of the more exotic settings and elements in the game. So many of that game’s dungeons take relatively mundane locations and turn them into exotic worlds of mystery and intrigue; from art galleries through to something as dull as a bank. That, too, was Ranpo’s strength as a writer, and something he cribbed from Conan Doyle and others; it’s one thing to give people an exotic location, but the impact (and thus connection) with it is if it’s a mundane location made exotic. Akechi’s adventures take him into some seriously weird and decadent places, but generally, for the benefit of the reader, are they also easily relatable to day-to-day life in Japan (or at least, day-to-day like in pre-war Japan when Ranpo did the bulk of his writing).

There are some 21 short stories or full-length novels by Ranpo that star Akechi. Many (most?) of these are in English, though to start out I recommend the excellent Edogawa Rampo: The Early Cases of Akechi Kogoro

, which has been translated expertly by William Varteresian. This one is available on Amazon.

A quick note regarding DDNet Premium