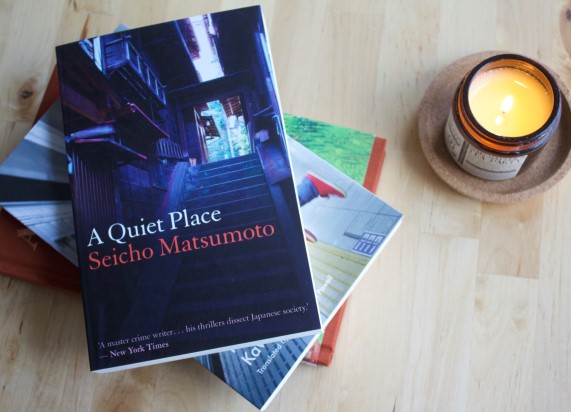 Matsumoto Seichō is one of Japan’s most prolific – and influential – crime fiction writers. Japanese crime fiction is one of the rare few areas where a good weighting of works have been translated into English (and other languages), and in many ways we can thank Matsumoto for that, because he really did pioneer a distinct spin on the genre that other Japanese authors have been able to capitalise on. Japanese crime fiction is different to that what we see in our native language, and A Quiet Place (not to be confused by the Hollywood blockbuster of the same name) is one of the easiest introductions to the genre for anyone interested in checking it out.

A Quiet Place follows the story of a public service salaryman – the stereotypical Japanese office worker. He’s loyal to his job to a fault, and puts in the very long hours to the detriment of his social life. Which is just as well for him, because he doesn’t get along with his wife and they know very little about one another. Far from talented at his work, he has committed his life and career to slowly working through the ranks through sheer dedicated to his job. He knows he’ll never head up a department or be anyone important, but he also knows that with enough dedication he’ll be the one that everyone relies on.

He’s also not a pleasant person, this Asai Tsuneo. We’re not meant to sympathise with him, so when his wife shows up dead in an odd part of town while he’s away on a business trip, we’re meant to engage with the subsequent methodical approach that he takes to investigating the unusual circumstances of her death with a dispassionate detachment. This is how Matsumoto establishes a tone akin to Sherlock Holmes or Agatha Christie’s Poirot – these amateur detectives (in that they operate outside of a formal job in the law) look at that which they investigate as a puzzle or riddle to be solved. Matsumoto drives home his criticism of salaryman culture by turning Asai into a similar figure, even when he should be very emotional about the subject of his investigations.

I can’t give away the last third of the book, even though it turns everything on its head in a manner that is critical to the overall theme of the novel. What I can say is that it does become shocking, and does so at a very rapid pace. The meandering first two thirds of the book escalate into something breathless in speed in the end. This is usually the sign of a poor writer, unable to control their pacing, but here, this escalation makes sense from a psychological perspective. Matsumoto loved to investigate the psyche, and the pace of the concluding act closely mirrors the way the specific manner in which the house of cards comes tumbling down for the methodically-minded Asai. It’s shocking, dramatic, and acts as yet further criticism of the salaryman role within Japanese social life. Where western crime fiction tends to delight in the “gotya” and out-playing the always guessing audience, you’ll be able to see the pieces in A Quiet Place well before they fall into place, but Matsumoto – like many of the Japanese contemporary crime fiction writers – isn’t so concerned with the reveal. It’s a mechanic through which his observations on society can be delivered, and it succeeds here, resoundingly well.

Though there is some sharp social commentary in A Quiet Place, it’s anything but a challenging book to read. Right from the start it’s a highly accessible page turner, and the detective process that it depicts is clean and clear. In some ways it mirrors the work of Raymond Chandler and other noir authors, in that unlike Christie and Conan Doyle, Matsumoto’s story isn’t so much about the genuis of the “detective” than how they perceive and interact with the world around them, though it also lacks the moral conflict, femme fatales, and other elements of classical noir. It goes through all the motions though, from hiring private detectives to Asai adopting disguises to trick people into giving him information.

The only real issue with the way that Matsumoto has structured this novel is that it can be initially off-putting. The writing can come across as flat, and though that is a deliberate device to mirror the flat existence of Asai (and masterfully translated into English to that effect), you’ve got to know Asai first before that theme becomes evident. The meandering pacing of the first two thirds also only starts to really make sense in the latter third. Thankfully literature works a little differently to video games and cinema in that the “slow burn” is a quality that readers tend to be open to. It is, however, altogether too easy to put this book down for a long period of time before finishing it off. The first time I read through it I ended up reading another book in-between it.

Nonetheless, A Quiet Place makes its themes clear without being condescending, and is a magnificently structured piece of Japanese crime fiction. The “salaryman” concept was never quite the same in the west as it was in Japan, and even over there it’s an increasingly old-fashioned part of work culture that the younger generations are rebelling against. Matsumoto’s work is, therefore, a little detached from the known experience of many of us. It is, nonetheless, a brilliantly readable and enjoyable entry into one of Japan’s great literary traditions.