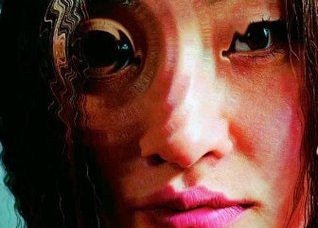 Kirino Natsuo is one of the most important figures in modern Japanese literature – right up there with Murakami. Kirino’s writing isn’t exactly pleasant to read, and you’ll walk away from Grotesque feeling more than a little deflated, but the way she structures her writing, and the way that it manages to be both completely modern and at the same time call to mind the noir detective writings of the likes of Raymond Chandler, makes the book as memorable and potent as you would have read in quite some time.
Grotesque tells the story of a number of principle characters, with a structure that shifts perspective so that each gets their moment to narrate their story. There’s the unnamed older sister, as well as Yuriko (her sister), Kazue and Mitsuru (classmates), as well as one that murders both Yuriko and Kazue. In principle, this is a work of detective fiction – the narrative spins around the murders, and figuring out who is guilty (and then proving so) is the primary driver through the plot. But, rather than focus on the investigative process, as you would expect from a hardboiled noir story, Kirino’s tale instead delves into the history and paths that each character takes through life towards those most tragic events. The reason that Kirino has done this that quickly becomes evident; the real criminal at play in Grotesque isn’t the murderer. It’s society itself.
Make no mistake, this book is absolutely brutal. It starts off simply enough; the older sister, who is intelligent and studious, is unhealthily jealous of the impossibly beautiful Yuriko. They have what seems like a standard, dysfunctional family, but things look up for the sister when she’s allowed to remain in Japan to attend a prestigious school, while Yuriko and her parents travel overseas for work.
Unfortunately that bliss doesn’t last long, and for reasons I won’t share because of dramatic spoilers Yuriko returns to Japan, and ends up enrolled in the same school as the sister. From that point on, what happens to each of the characters is often eye-opening in its terrible cruelty. Yuriko started having a sexual relationship with her uncle while overseas and, on returning to Japan, begins to sleep with the husband in her host family. Then she also finds a classmate to pimp her out, and becomes one of the most popular teenage prostitutes going around, in demand with entire rugby teams through to old men. Kazue develops an eating disorder as Yuriko’s older sister plays with her emotions. When we’re introduced to the murderer, he spins a story about the incestuous attraction that he has to his little sister, and how he ended up becoming a sexual prisoner himself. All of this is described in lurid detail, and it makes for incredibly uncomfortable, unflinching reading material.

“You didn’t know, did you, dear? Johnson and I broke up because of Yuriko.” I suddenly remembered the expression on Jonson’s face as he sat in front of the fireplace in his moutain cabin on that night so long ago with Yuriko leaning against his lap, playing sweet with him. She was just a primary school student then.”

Grotesque’s willingness to dip into the extreme has echoes of Marquis de Sade’s writings, and that doesn’t seem to be coincidental. In his writing, de Sade was so extreme, violent, and sadistic because, as a revolutionary, it was his way of highlighting the shocking hypocrisy, corruption, and dark underbelly of the establishments of his time (his favourite target was the church). It was his expression of anger. Kirino has her own targets, and Grotesque is a deeply feminist novel. 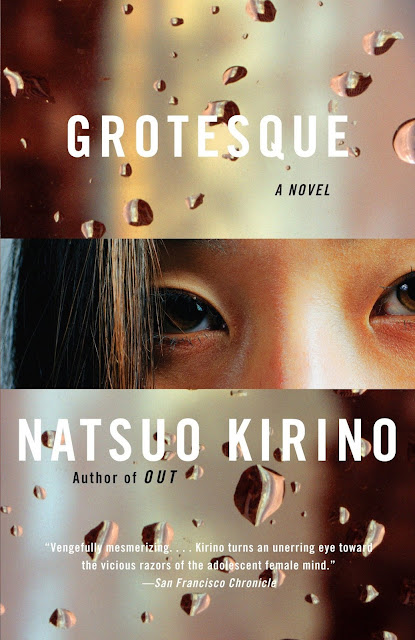 Throughout the book, the common thread is that the only way women can find a degree of freedom and security is to allow themselves to be victimised by men. “Men live by rules they’ve made for themselves,” Kirino writes. “And among those rules is the one specifying that women are merely commodities for men to possess. A daughter belongs to her father, a wife to her husband. A woman’s own desires present obstacles for men and are best ignored. Besides, desire is always for the man.”

For women, trying to take control of themselves, and write their own rules, is not just something that results in society punishing the woman (i.e. prostitutes find themselves being killed), but also something so fundamentally confusing to men that the “punishment” becomes a curiosity, rather than something that raises anger or a desire for justice. “If a woman who is beautiful but has no other redeeming value turns to tricks until she’s ancient, no one gives it a second thought. But Kazue’s turn to prostitution left everyone racking their brains to figure out why. A career woman by day, a prostitute by night. Men everywhere were beside themselves trying to work that one out.”

Grotesque comes across as a bitingly angry book, with a strongly nihilistic outlook on the future. It’s most certainly sex-positive – it is certainly not critical of the sex workers, or judgmental on why a person might turn to the profession, but for a culture as patriarchal as Japanese society is, Grotesque is also a damning indictment of the way that the society treats girls and women.

“A biology professor certainly ought to be able to recognise the signs of fermentation and decay. Isn’t he the one who taught us all about these processes in organisms? In order to induce the process of decay, water is necessary. I think that, in the case of women, men are the water.”

If the events of Grotesque are unpleasant, they’re only matched by the deeply flawed and impossibly unlikable characters – even those that we are meant to sympathise with (and absolutely do so, on one level or another). This is also deliberate from Kirino, of course. Much of the detective fiction tone of the book is driven by presenting the story through a morally compromised bunch in the vein of hard-boiled detectives like Chandler’s Philip Marlowe, only with less of a charismatic swagger and more of a staggering gait from being crushed by the cold and uncaring society around them.
It also doesn’t help the likability of any of the characters that they’re all pathological liars. One of the common features of the hard-boiled story is the unreliable narrator, where moments through the story crop up to make us realise that the story we’re being told is only one person’s view on events, and it’s very likely that because that person hasn’t got their hands clean, their story should be taken with a pinch of salt. Grotesque shifts through a couple of different perspectives in which the characters will directly contradict one another and accuse one another of lying about the exact same events that they’re experiencing. This is important, as it has allowed Kirino to go to extremes in having characters paint one another as horrible human beings (Yuriko and her sister are particularly malicious towards one another), while making sure that we, the audience, understand that while each character is deeply unpleasant because of their attitudes, they’re not the villain that the others might paint them as being.

Grotesque is a masterpiece of modern feminist crime fiction. It’ll make you feel uncomfortable and deflated, and it’s a very long book with very little relief. It’s easy to read, but hard to settle down for long reading sessions. Originally published in 2003, this book is only becoming more relevant today, in the era of MeToo, as people start to realise that the stifling, crushing claustrophobia of books such as this are closer to the experience that far too many women go through than society wants to admit.