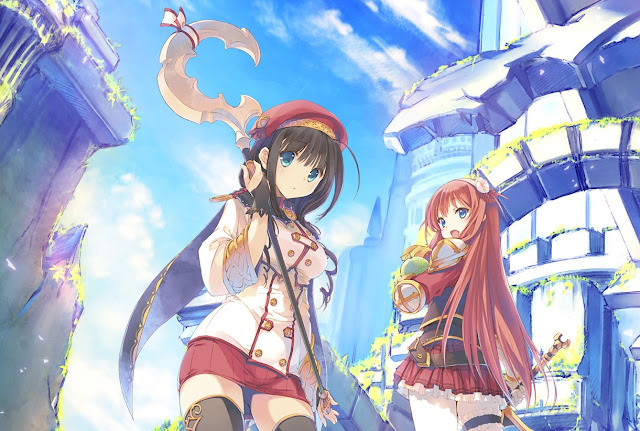 I like a game that backs itself like Dungeon Travelers 2 does. It’s a game purely for the most otaku of otaku, rooted in eroge tradition, and it doesn’t even pretend its not. There’s no apology and no attempt to conceal what the game is with some softer, more “mainstream” elements. It is what it is, and it’s quite happy for you to either love or loathe it for that.

Related reading: This game was developed by Sting, which was also the developer behind the excellent Hyperdevotion Noire. Matt’s full review here.

We’ll skip the half-naked girls for now and talk about what Dungeon Travelers 2 is as a game. It’s a dungeon crawler, similar to any of a half dozen other dungeon crawlers that are currently enjoying a resurgence of popularity on portable platforms thanks to the likes of Etrian Odyssey, Demon Gaze, and Persona Q. Players pull together a team of heroes, and then go exploring through a range of labyrinths that are constructed in a layout that, can be drawn onto grid paper, old school Dungeons & Dragons style. Movement around this map is all turn based, and with every step there’s a chance of an enemy encounter, which also plays out in a turn based fashion. 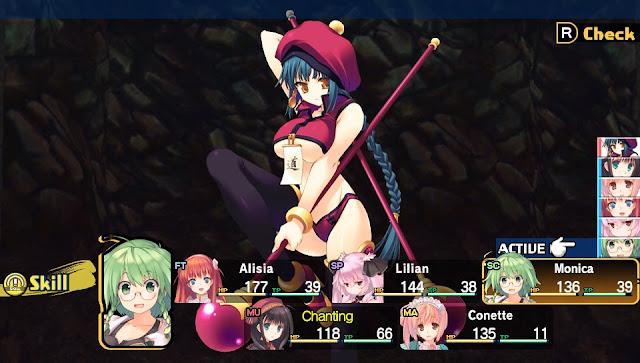 These kinds of games have been around since, well, games were around, with the likes of Might & Magic and Wizardry pioneering the RPG genre way back before most people that will read this were born. There’s a simple reason that the dungeon crawler has remained such a timeless form: it focuses on the exploration of the unknown, but does so in a way that provides players with a clear guidance on their current, and subsequent objectives. And, with every step being fraught with danger, there’s a suitable level of tension that helps build an atmosphere that you’re delving into some deep, dark recesses of lairs of evil.

Dungeon Travelers 2’s strength is not in innovation; it is a fairly by the books dungeon crawler, in which each character will have a role in the party (fighter, band-aid – sorry, healer – magic user), and you’ll be able to exercise limited control in how those characters develop by choosing which from a limited range of skills they can unlock upon each level up. There’s some light differentiation from other dungeon crawelers in that with each monster killed the team absorbs their soul, and after collecting a certain number of the souls they can be traded in to create special accessories that power characters up in interesting and varied ways. That feature aside, if you’ve played enough dungeon crawlers, then you’ll be instantly familiar with what Dungeon Travelers 2 is offering. You’ll be building the same mix of heroes and skills as you have in previous dungeon crawlers, and there’s a certain classical elegance to the systems in play that should make the genre veterans rightfully nostalgic.

Dungeon layouts are also quite classical, with the standard kind of spatial puzzles and positioning of traps that most genre veterans will be quite familiar with. I know it sounds like a criticism of Dungeon Travelers 2 to say it’s so rooted in its history, but that’s not the case at all. To me that represents a kind of confidence, that the developers know the traditional dungeon crawler format has legs and it’s not worth gunning for gimmicks or unnecessary complexity when what has worked for decades still works. Developed by Sting as it is, it is a supremely balanced and clean gameplay experience, supported by some very sharp and unforgiving difficulty, which makes for a nostalgic and almost retro experience that, unlike many of those actual retro dungeon crawlers, also understands the need for modern games to be fair. My team was wiped out on more than a few occasions while playing Dungeon Travelers 2, but not once did I ever think that I was being unfairly treated. The encounter rates are reasonable, there is fair warning before you run into a boss battle, and you are provided with plenty of backtracking opportunities that make the tactical retreat a fair option without forcing excessive downtime. 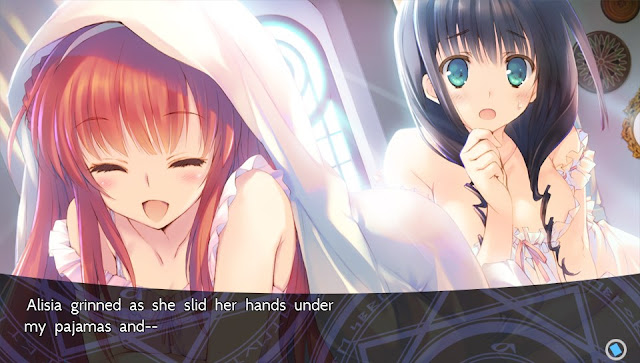 Now, for all I’ve written above, I’ve still never played a game quite like Dungeon Travelers 2. Not in English, anyway. While it might not be the most original game mechanically, there is a specific point of differentiation to this little dungeon crawler that will no doubt polarise you one way or another – this one has a lot of exposed flesh.

Most of the game’s enemies, for example, are beautiful women, with the slightest hint of monster in their designs, and who are posed in provocative positions, to say the least. Spread legs, heaving chests, the works. Defeating bosses will reward you with a screen of the boss in an incredibly compromised, and generally submissive position. Your own team are comprised of women as well (with the exception of the non-combatant male lead, who acts as the player’s avatar and refers to himself in the first person – i.e. “I woke up and saw two women in their nightgowns staring at me”), and you get to see plenty of them as well. There’s no actual nudity, and Atlus removed a tiny number of the most provocative images to get the game through the western censorship boards, but I’m comfortable saying that you’re not going to find a more erotically-charged game on the PlayStation Vita. A console that already includes more than a few other games that make sexy-time a core part of the experience.

If the one-male-and-literal-dungeons-filled-with-half-naked-women theme doesn’t make it clear: Dungeon Travelers 2 is a pure example of the harem fantasy that so dominates the more otaku side of Japan’s Akihabara culture. It’s a sub-culture and genre of anime, manga, and game art that is routinely criticised for its exploitation and perceived sexism – especially by critics in the west – and I’ve got to say that this game doesn’t actually provide a good counter argument to those critics. Where I think the critical response to games such as Lollipop Chainsaw, Bayonetta, Dead or Alive, Hyperdimension Neptunia and other “exploitative” games is often misguided, Dungeon Travelers really doesn’t do a good job through its narrative turning female sexuality into empowerment, as we see in Lollipop Chainsaw or Bayonetta, or using it to satirical ends, as happens in Dead or Alive or Hyperdimension Neptunia. Instead, this game offers something you might expect a giggling schoolboy to write. It’s clearly self aware and understands how fundamentally silly its concept is, but it really doesn’t do a good job in contextualising what’s going on or turning the eroticism into something core to the narrative. 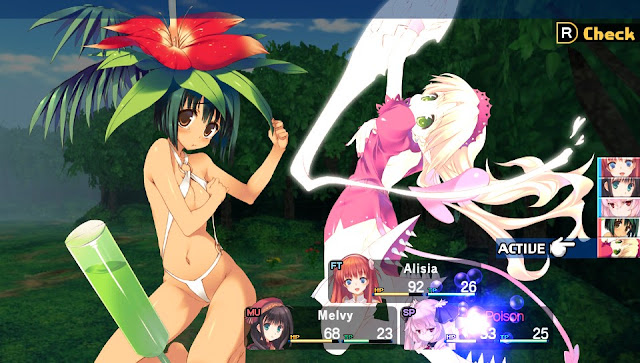 And yet it’s a pity that this game is going to be lambasted for being that kind of game, because it’s actually quite impressive on an artistic level. Character designs are universally vibrant and intricate. Monsters that pop up in the combat sections aren’t animated in any way, but they are drawn in bold, dynamic poses that gives the game a better sense of action than it deserves. The cut scenes with the girls in compromising positions are anime pin-up gold. While it’s not going to be to everyone’s taste, it really is quite disappointing to think that Dungeon Travelers 2 is going to be quite robustly criticised for something it actually does really very well.

It is difficult to dig into the narrative though. Something like Hyperdimension Neptunia is a smarter game than most people give it credit for because its world building is so distinctive and complementary to the narrative that to this say I don’t understand why people miss that its a satirical deconstruction of everything that people accuse it of representing. Dungeon Travelers 2, meanwhile, tells players that there are monsters appearing in the world and you, man, need to lead the team of gorgeous women into dungeons to tame them. It lacks the clever use of fourth wall-breaking commentary that other games make such effective use of , or any kind of explanation for why these monsters are almost all female.

The narrative in general doesn’t really connect with me. It is loosely a game that’s about building close bonds between the male lead and his harem, but it’s far too wordy and says far too little to be convincing there. Other otaku games, such as Ar nosurge, explore the relationship between man and woman to a greater richness and depth, while others, such as Conception 2, make use of the harem fantasy to drive home more significant social and political commentary. Dungeon Travelers 2 doesn’t really have a level deeper than its surface, which in turn makes it hard for me to really connect to. 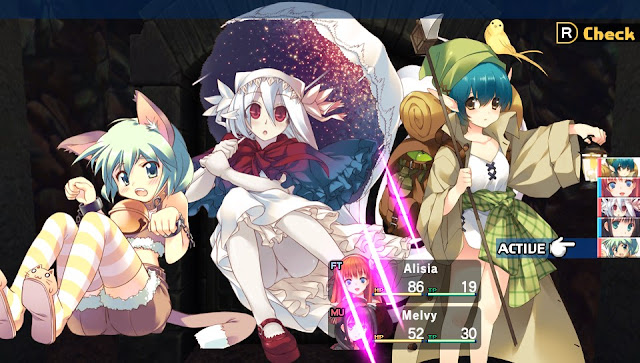 But I still love it. I’m not going to argue that there’s a subtext that makes this game less exploitative in some way, because it is very exploitative, but sitting firmly in the realm of guilty pleasure as it does, Dungeon Travelers 2 is very, very enjoyable. It scratches my nostalgia for classic dungeon crawlers, while offering a stiff challenge, and stunning art work that, while I’ll never play the game in public because of those pictures, I find to be both amusing and oddly charming.

The Art of Fallout 4 book coming this December