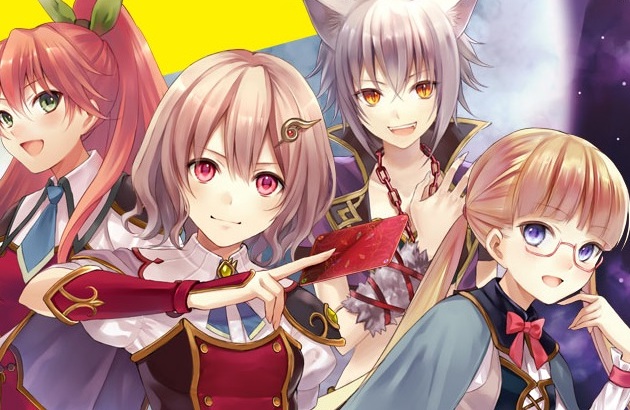 The exceedingly niche Monster Monpiece has been shrouded in controversy ever since Idea Factory announced the game would be receiving a release beyond Japanese shores.

It’s no secret why some audiences deemed the game inappropriate; take a gander at the animation on the game’s Wikipedia page (remembering that this is a mechanic that players use to get moe girls to take clothes off) and it becomes crystal clear where many people’s first objections lie. On the opposite end, though, were fans aggravated when it was announced that the game was being self-censored, to remove images so that certain young characters are not quite as undressed. Idea Factory International did this in order to appease rating boards and avoid legal action. In other words, this game’s release is a literal example of “stuck between a rock and a hard place”.

Beneath all the hullaballoo, I’m pleased to report that Monster Monpiece is a thoroughly competent card game that oozes personality from the stellar soundtrack to stunning artwork. I sincerely hope it’s a profitable venture and rewards Idea Factory’s bold decision to bring the game to foreign markets because it offers a truly inventive take on a genre that is woefully overlooked out this way.
Monster Monpiece’s plot is decidedly tame for a Compile Heart game, never mind a title that managed to stir up such a mess. Things kick off with a reasonable amount of lore regarding the origin of monster girls and their role in the human world before delving into our shy protagonist’s journey to simultaneously rescue her comrade, save the world, and shed the crippling fear she feels in social situations. Many will perceive it as formulaic anime fare that takes itself too seriously for its own good, especially since the characters tend to be dull devices for advancing the plot rather than bursting with personality, but I found that it used the tropes traditional, but charming for the most part. 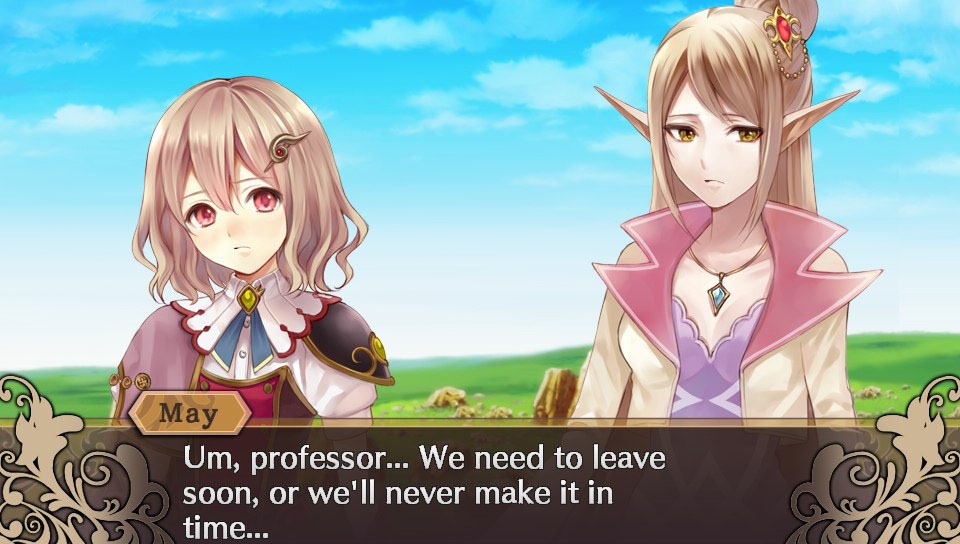 The narrative isn’t much to write home about but it serves its purpose in fleshing out the main course – Monster Monpiece’s spectacular battles. It’s a good thing, too, since the card game mechanics have humble beginnings and it takes a while for the action to sufficiently ignite. Battles entail summoning the aforementioned monster girls onto your side of a 3×7 grid from a deck of forty or so cards. Once on the field, they begin making a beeline for the enemy’s castle by strolling one space on the grid per turn.
The perpetual movement in such a confined space ensures that every one of Monster Monpiece’s bouts is a power struggle. Both forces seek to defend themselves whilst invading enemy territory and it’s impossible not be engaged in every conflict the whole way through when a couple of key miscalculations could lead to devastation. The first few hours of the game are admittedly effortless to get through, as it’s essentially a thinly-veiled tutorial designed to ease you into all the mechanics, but when it gets going you’ll be glad you had that time at the start to put together a decent deck.
When the game starts tossing in more intricate facets such as monster fusions, card auras, and abilities, the strategic intensity is only bolstered. Couple this with an ensemble of units from sword wielders and bowman and to healers and buffers and you’ve got depth that belies the simplicity that the moe graphics would have you believe. If Fire Emblem had a card game with only busty women, it’d be Monster Monpiece. 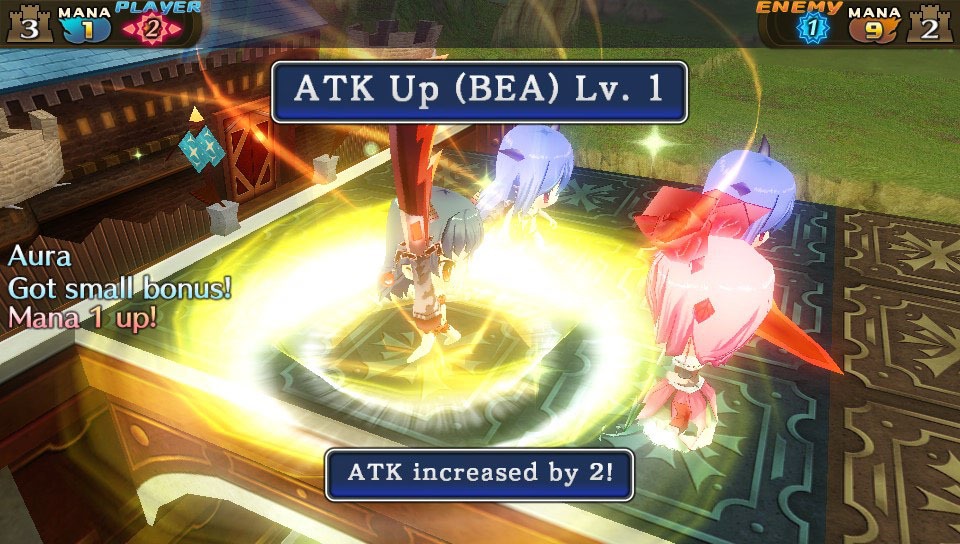 And like the earlier Fire Emblem titles, the game is fairly straightforward in scope as you’re alternating between a simplified world map, some light micromanagement, story sequences, and the obvious battles. Despite the simplicity, combat never grows irksome. The matches are fairly snappy yet still require a great deal of strategy and foresight on the player’s end. Thus, the “grinding” on random foes never particularly wore me out since each battle endeavours to put the player in the hot seat (particularly with the challenges that begin cropping up later).
My only beef with the whole system is that, in the event that one player runs out of cards, they automatically lose. This means that whoever moves first gains a major advantage and can potentially base their strategy around stalling. Granted, popular trading card games like Yu-Gi-Oh! incorporate the “deck out” rule as well, but that game has mechanics that allow both players to manipulate it as a legitimate strategy. Given the considerable likelihood that both opponents will opt for decks with 40 monsters, it’s rather painful seeing a loss screen after a highly competitive match simply because of the outcome of a coin flip. Despite that, I could still see this game developing a (very small) online community with some sort of self-imposed honour system in play.
Managing your deck is nearly as exciting as the battles in its own way. Nabbing new booster packs and busting them open with the touch screen is a simple joy that offers a little joyful suspense every time you acquire new cards. 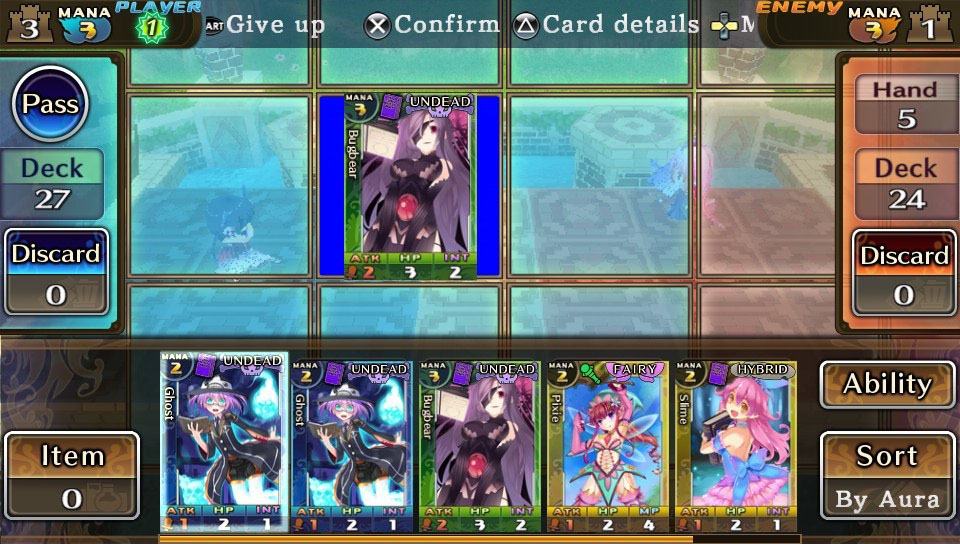 And, of course, discussing the card management brings us to the 20,000 lb elephant in the room; Monster Monpiece’s “First Crush Rub” system, which allows the player to alter their cards to better suit specific deck builds and power them up by, uh, stripping them. Remember that decidedly suggestive animated.gif on Wikipedia I linked to at the start of the review? You’re going to be doing that with your own hands hundreds of times if you want to get your mitts on every card variant.
And to be perfectly candid, even if your otaku tendencies are through the roof, this is a mini-game that’s amusing at first, but wears thin rather quickly. The “sweet spots” needed to awaken each monster girl’s dormant powers during First Crush Rub tend to be comically concentrated in the least subtle regions of the female anatomy possible. The process takes a solid minute or so of intense touch screen motions that are hardly easy on the hands, and not exactly something you want to do in public.
Most interestingly, it juxtaposes the game’s story in a manner you’d never expect. Aside from the designs for the main characters (who are still dressed reasonably by mainstream teen anime standards), there’s very little in the way of sexual content in Monster Monpiece, other than the card designs and the fondling. I didn’t even catch any shamelessly easy cracks about a character’s chest size in the dialogue, which is a classic Compile Heart narrative technique. Sure, there’s the occasional bath scene and the like littered throughout, but these tend to be very brief and are presented innocently enough in nature (not to mention optional). I just don’t get the controversy about this game. 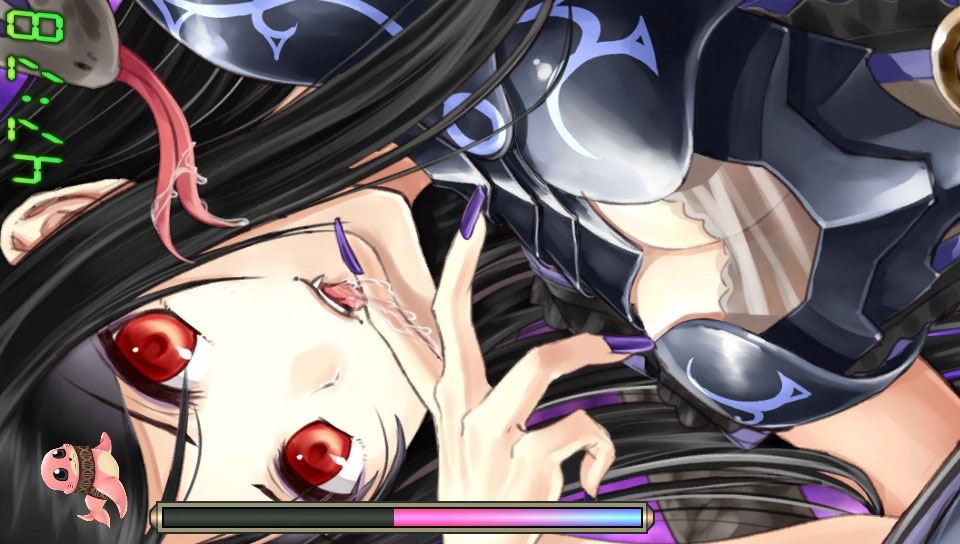 In fact, it’s not as if you outright need to engage in rubbing; you couldget through the game’s story without massaging any monster girl other than the one in the tutorial. The cards become increasingly controversial only at the player’s whim. It’s as if the game delights in gently mocking the curiosity of its players and the lengths completionists will go through to actually 100 per cent complete a game (seriously, hours of your life will be spent doing this same mini-game). Many will find it to be erotic or repulsive, but I interpreted it as a bit of humorous fanservice with a twist as it contrasts so noticeably with the game’s tone.
Monster Monpiece will rub most western audiences the wrong way (I was waiting the entire review for that pun, Clark. Well played – ed), and its classification rating is definitely deserved, but it’s one of the precious few card games available on the Vita in English and a legitimately premium title to boot.

Review: The Wolf Among Us Episode 4: In Sheep’s Clothing (Xbox 360)