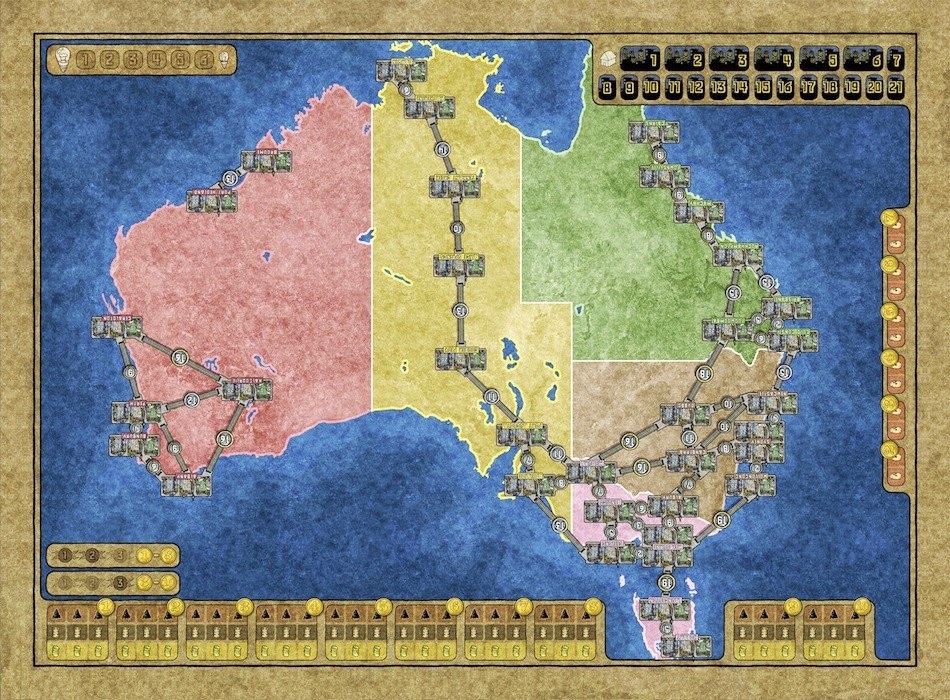 When people talk about innovative game industries, they’re almost certainly going to think of Japan and America (the US and Canada, specifically). Between the likes of Sony, Nintendo, Microsoft, Square Enix, Atari and others a lot of the history of game development owes itself to those two regions in the world.

A country that people don’t often think about with regards to game development is Australia, and this oversight parallels our history in the film industry. For all the innovation and technical achievement that Hollywood brought the world, it was the Charles Tait-directed Australian film, The Story Of The Kelly Gang (1906), that was the world’s first feature length film. A political system and social environment that has been generally hostile to the arts over the decades has meant that neither the Australian film nor games industry has been allowed to fully capitalise on its innovative potential – we’ve lost too many talented filmmakers and game developers overseas – but nevertheless it’s worth having a look at one of the smallest game development industries in the world to produce so many global hits.

Related reading: If you’d like some suggestions for games to play on Australia Day, here are ten games on current platforms we recommend.

It’s all about a hobbit

The Hobbit by Beam Software is Australia’s games industry equivalent of The Story Of The Kelly Gang. This text adventure epic sold incredibly well across the globe (at least as well as the Zork games, if not better), but more notably than its commercial success was the amount of innovation it brought into the genre.

The game plays out in real time, with the narrative around the players continuing on (and taking unexpected directions) if the player remains inactive. “You wait – time passes” was something you’d see a lot of if you sat on your hands thinking about what to do next, and this could have an impact on what you would see and be able to do later on down the track. The game’s NPCs all had their own behaviours, and would get into fights with one another (and of course, Gandalf indulged his love for getting captured) independently of the player’s actions.

In addition, this was the first game to allow players to input complex commands. Before The Hobbit text adventures allows players input phrases like “move left” or “attack troll,” but in The Hobbit the game was able to execute complex, full sentence commands, giving players a great deal more control over how they interacted with the world.

All this combined to make The Hobbit one of the first examples of emergent gameplay; years before Warren Spector’s Deus Ex is credited for taking emergent gameplay into the mainstream of entertainment. It’s no small wonder then that Infogrames, the global gaming giant at the time, acquired Beam Software following the success of The Hobbit, and renamed the developer to Melbourne House.

But it wasn’t the only hit for the company.

RPG fans will surely recognise the name “Shadowrun.” That particular cyberpunk RPG was a megahit of its time, won numerous awards, and was a major console success for the company. Beam Software also produced AFL and Cricket games, primarily for an Australian audience, and many would still argue that Aussie Rules Footy and International Cricket (and later Super International Cricket) are in fact the finest examples of their respective sports relative to their age.

Unfortuantely Beam Software/ Melbourne House is no longer with is. It was acquired from Infogrames by Krome Studios in 2006, and following the serious financial trouble that developer found itself in, was sadly shut down.

Krome Studios represented the archtypical Australian development studio; it created a couple of original IP of its own, but paid the bills through a lot of licensed work. When the Global Financial Crisis hit a couple of years ago, and the Australian dollar subsequently jumped in value, it became financially unviable for overseas publishers to outsource work to Australian studios, and the contract and licensed work for Krome dried up. With that the company nearly disappeared, however a couple of recent releases suggest that it’s not over yet.

Krome was founded in 1999 and quickly grew to become one of Australia’s largest independent developers. You’ve almost certainly played some of its games in the past. Ty the Tasmianian Tiger was an original IP of its, but it also created Viva Pinata: Party Animals on the Xbox 360, ported multiple Star Wars games to multiple platforms, and it was the driving force behind the reboot of Spyro in The Legend of Spyro: A New Beginning. Following its financial difficulties in the last couple of years, many assumed that it had gone out of business, but has since released two Ty the Tasmanian games on iOS and Xbox. So, while the old Beam Software is no longer in operation, Krome’s other development studio is not out for the count just yet.

Other Australian developers have also specialised in licensed and contract work, and those that survived the GFC are still going strong today. Torus games is another example of Australia’s long heritage with licensed games. Established in 1994, it has worked on just about every platform you can imagine, from the Game Boy right through to the PlayStation 3 and Nintendo Wii U. It even produced not one, but two Nokia N-Gage games (remember that phone/console/thing?). Many of the games it has developed haven’t been met with the greatest critical reception (as our own review of Falling Skies: The Game shows), but in an industry where developers disappear after a single game, Torus’ ability to create a sustainable business model over such a long time deserves respect.

And there are plenty of Australian-developed licensed games that are true gaming highlights, too. Another Australian developer, Straight Right (a sister organisation to Tantalus, another veteran Australian developer founded in 1994) was responsible for both the ports of Mass Effect 3 and Deus Ex: Human Revolution Director’s Cut on the Nintendo Wii U. And it was an Aussie team in Canberra that was responsible for taking Gearbox’s Borderlands franchise and doing something new with it, with the result being Borderlands: The Pre-Sequel.

And then there’s the mobile innovation

Even as the biggest studios in Australia have been shutting down from the Global Financial Crisis and we lost developers such as the folks behind De Blob and SEGA’s local Creative Assembly division, there has been a rise in truly innovative Australian mobile and indie developers that has become a real hallmark of the local, modern, Australian industry.

Flight Control. Jetpack Joyride. Crossy Road. Fruit Ninja. Games developed by small teams of creative developers have had a big impact in the mobile market, spawning any number of clones across all gaming platforms. In the case of Firemint, the developer behind Flight Control, the success of that game and Real Racing (its other major franchise on mobile) led it to an acquisition from EA where it has become a major cornerstone of EA’s mobile strategy. And it must be said one of the few EA mobile-focused developers that has been able to maintain its reputation for quality, even as the likes of Popcap and Mythic Entertainment drag their respective franchises into the dirt, laboured under nasty free-to-play mechanics as they are.

But perhaps the most influential of all was initially a humble puzzle/ RPG hybrid called Puzzle Quest. Created by Steve Fawkner as part of his popular Warlords franchise (and we’ll get to that game shortly), Puzzle Quest might not have been the first game to mix a puzzle genre like match-3 with RPG-style questing and levelling, but it was certainly the one that achieved the kind of popularity that even today we see emulated over and over again by developers and publishers.

Puzzle Quest highlights the ingenuity of Australian developers when they’re at their absolute best; despite minimal resources, the game was able to take a simple concept and execute on it in such a way that the experience was every bit as compelling as the largest games developed by the biggest teams.

But Aussies do hardcore, too

The most obvious example of this is Steve Fawkner’s former employer, Strategic Studies Group. Founded in 1983, this company was responsible for many of the most serious strategy games for the most genuine of military, history, and strategy fans. Games released by Strategic Studies Group included Reach for the Stars, Battles in Normundy, and Decisive Battles of the American Civil War. These games were typically characterised with intensely difficult AI and historical authenticity. And then there was the Warlords franchise, which was the publisher’s attempt at something more “mainstream.”

Sadly following Fawkner’s move away from the company and the death of one of its founders, Strategic Studies Group seems to have stopped active operation. Its website hasn’t been updated since April 2010. And we have seen other attempts by Australians to appeal to the hardcore gaming audience under perform, such as L.A Noire, the ambitious game developed by the now-defunct Team Bondi.

But among the Aussie indies there are still developers creating hardcore stuff. In fact, we’ve become particularly good at tapping into a player’s nostalgia for past classics, perhaps because Australia itself has such a long heritage with games. Witness Alex Norton, the one-man band behind the procedural Malevolence: The Sword of Ahkranox. A game that taps into Wizardry, Might & Magic and old-school Dungeons & Dragons games, Norton’s title was successfully Kickstarted and has enjoyed a small, but incredibly dedicated fan base ever since. And then there’s Tin Man Games, which has also managed to tap into nostalgia with the incredibly niche Gamebook Adventures franchise. For fans of the old Fighting Fantasy and Lone Wolf interactive novels, Tin Man Games has an absolute stranglehold on that market.

Then there’s the likes of Infinity Wars, a digital CCG developed by an Australian team that is looking to compete with the likes of Blizzard’s Hearthstone and Ubisoft’s Might & Magic Duel of Champions with licenses such as the almighty Star Trek on its side. You don’t get more “hardcore” than that. And for sports fans, Red Ant is the first Australian developer to do the sport of cricket justice since, arguably, Beam Software and Super International Cricket on the Super Nintendo, with its release of Don Bradman Cricket 14. Such a game might not mean much to our overseas readers, but cricket is as much a part of our culture in Australia as Gridiron is to Americans, and the importance of having a good cricket game available to the locals here shouldn’t be underestimated; it very much represents our culture and heritage through the medium of games.

And so, despite being a tiny development industry on the world stage, Australian developers continue to enjoy success because we have a highly-skilled and experienced community of game developers that have been able to use innovation to overcome budgetary limitations, and have inspired developers from far wealthier development industries around the world in the process.

Contest! Win one of two copies of Atelier Ayesha Plus on PlayStation Vita