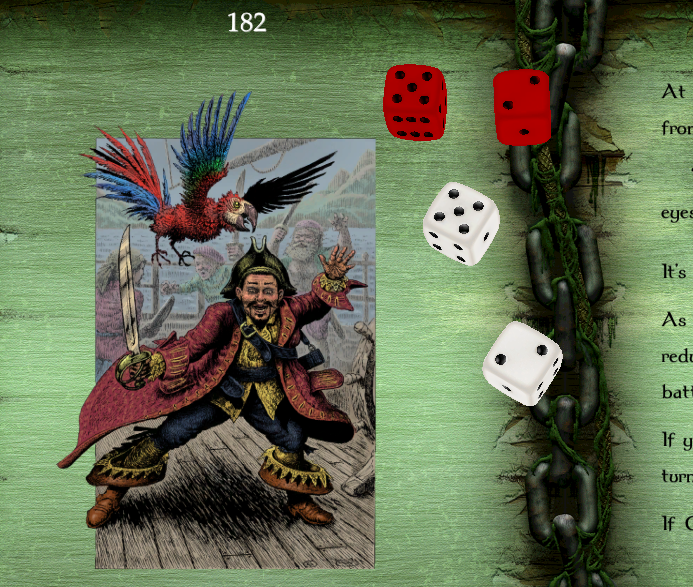 Review by Matt S.
After eight Fighting Fantasy game books and innumerable others (either from its own Gamebook Adventures franchise or other third party authors), Tin Man Games has the choose-your-own-adventure gamebook style down pat.
It understands how to make a visually pleasing interface and it knows how to make text legible – a critical concern when you consider how much reading these gamebooks involve. It knows how to keep the action sequences snappy with dice rolls that are times just right to show the results quickly while also creating some visual flair. And it knows how to give each adventure an ambient soundtrack that perfectly fits with the setting, atmosphere, and tone of each individual gamebook.
Tin Man Games isn’t getting any better with the gamebook genre, and isn’t exactly innovating, but then I don’t think there can be anything more done to the gamebook without ruining everything that makes it good (as we saw happen with a recent travesty by another app developer to recreate Lone Wolf for a “modern audience”). Or if I was going to put that another way – Tin Man Games understands the audience it wants for its releases. It wants the people who grew up with Fighting Fantasy, Lone Wolf and the like and wants to indulge some nostalgia by playing them on their iPads. And the developer can hardly be faulted for having such a razor-sharp focus on appeasing that specific niche when it continues to deliver everything it promises with its games. 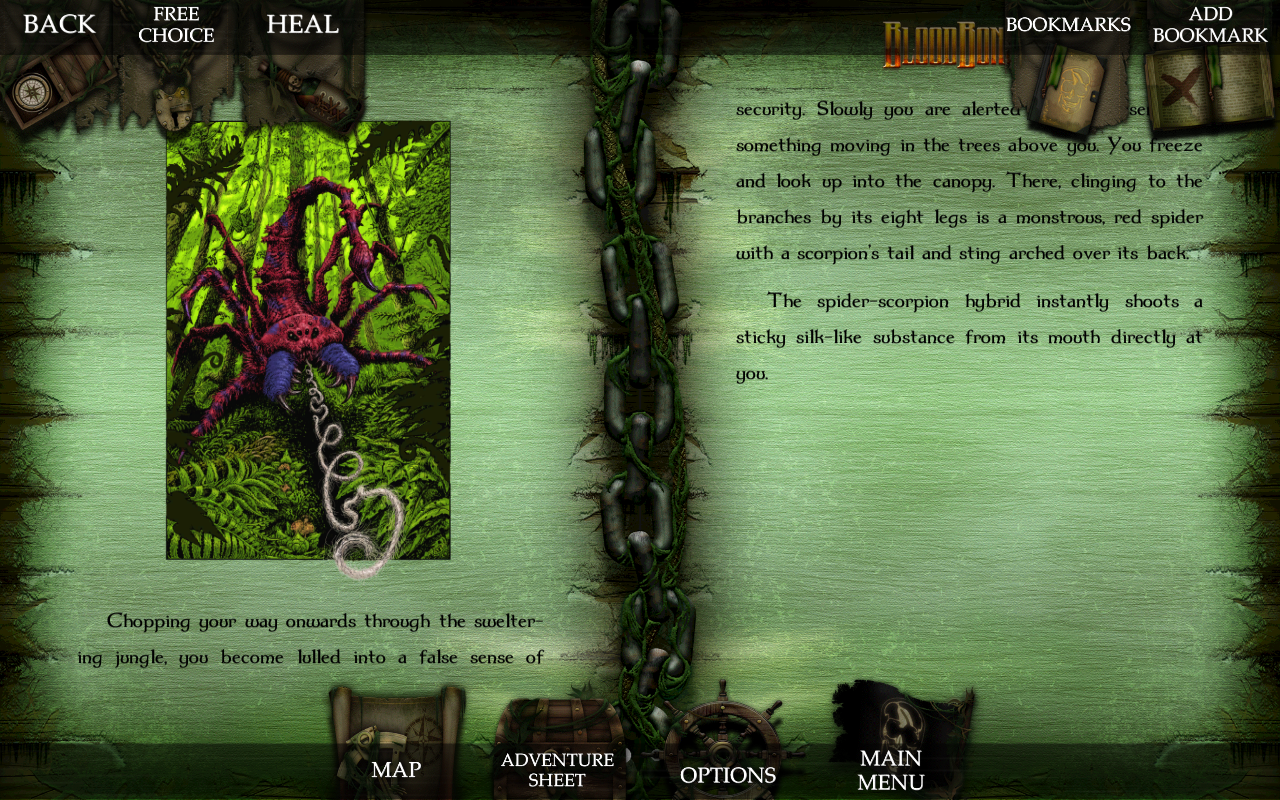 Bloodbones is the eight classic Fighting Fantasy title that Tin Man Games have adapted, and this one is a glum little semi-horror adventure set in a dark pirate fantasy setting. You play as an fellow burning with a desire for revenge after a pirate captain ransacks your hometown. Unfortunately after almost chasing him down you discover he was killed by a bounty hunter. Luckily your chance for revenge is not done, as all is not what it seems…
As with all gamebooks, Bloodbones is a simple game to play – you read a passage, and at the end of it, you’re given a couple of options for actions you can take, and each of of those actions take you to a different page – some with good effects, and others quite bad. Occasionally there will be combat, which is a simple matter of rolling the dice and the one with the highest total (after bonuses for items and so on thrown in) wins the battle and damages the opponent.
What makes these gamebooks so entertaining despite their simplicity is their writing, which is very much B-grade, but the right kind of pulp fantasy that makes for a real page turner of an experience. It also helps that gamebooks are brutally difficult – you’ll need to play over and over again (or outright cheat by using a the ability to backtrack to previous passages within the book that the app provides you) to have any hope of reaching the positive end. 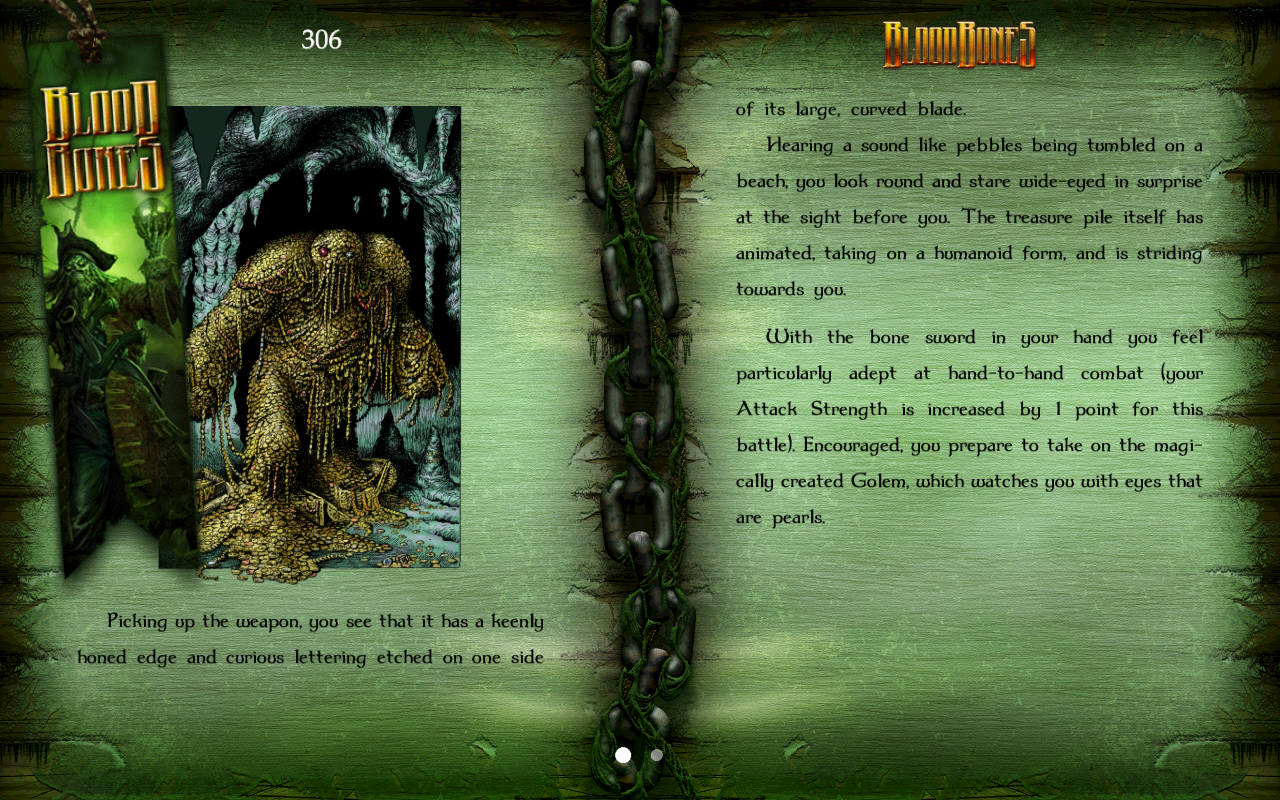 And there’s some lovely sketches taken straight from the Fighting Fantasy original book that are sprinkled through the game that help to visualise the action.

Related reading: We have reviewed a lot of Tin Man Games’ work. You can find those reviews here.

The end result is a pure gamebook experience. People who are younger and have grown up with the likes of Skyrim and Dragon Age will likely wonder why anyone would play one of these things (or they might give one a go and realise that they’re a load of fun). But older folk who have fond memories of gamebooks before video games were anything more than bleeps and bloops in dingy arcades and who have somehow not yet played one of Tin Man Games’ titles… well, you may as well start here.

Sid Meier’s Starships is announced and the trailer is woeful