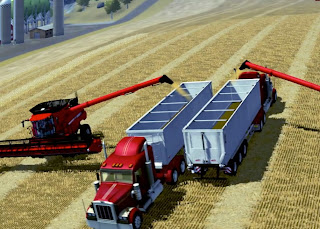 If I was to say to you “hey, I’m going to skip this awesome party that you’ve invited me to to go and play Farming Simulator,” and you hadn’t played a Farming Simulator game before, you would possibly think I’ve gone insane.

Or I was just boring. And in fairness I probably am boring, but Farming Simulator is legitimately good fun. This isn’t a new franchise now, and every year I see people buying this game for kicks and giggles, and finding themselves sinking dozens of hours into it.

It’s like a less abstract Harvest Moon, basically, and it’s appealing for much the same reason. The very idea of recreating actual “work” that actual farmers do doesn’t sound like much fun at first, but the appeal of Farming Simulator is literally in watching stuff grow; there’s a simple pleasure to watching a farm build up around you and filling it with with fields of crops which can then be sold for profit and the proceeds used to buy more stuff and build a bigger farm. For those that care, Farming Simulator has the license for various real-world manufacturers of farming equipment, and that authenticity helps build a connection to the environment that you’ll be working it – it all feels that much more real for it. And so in no time you’ll be clearing fields, planting crops, and waiting for the produce to grow so you can take it to the market that’s offering the best rate and selling it for profit. 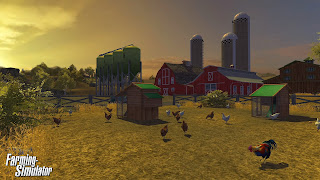 At first you’ll be working a single field, but it won’t take long for you to buy some extra fields and build up a sizable business. At a point it becomes too difficult to manage everything at once, and that’s when it becomes necessary to “hire workers”; an action that puts a given tractor on autopilot who will then prepare the field for you while your bank balance slowly drains in “payment.” It’s a reasonably abstracted system that makes a great point about farming – the margins that farmers face are thin at the best of times, start bringing on staff to help and building a sustainable business becomes a real challenge. This isn’t an economic sim by any means but progress becomes very slow and methodical once hired help becomes a necessary investment, and it is entirely possible to fail and sink into all kinds of financial pain. While the community tends to have great fun with Farming Simulator (with some classic mods on the PC version), the game does take itself seriously for people who want to play it that way, and as with any good sim it’s possible to learn a thing or two about the subject material by playing the game.

The game takes place in an open world environment, complete with a small town and people wandering around as the day draws on. This environment in many ways resembles the model dioramas that people like to build… and is equally lacking for interactivity. In other words it all looks nice on the surface, but when you try and do anything with it, you can’t. See a pedestrian on the side of the road, and you can drive right through him or her, and the vehicle will just pass through as though they were a ghost. They won’t even react to a speeding tractor coming straight at them. Cars don’t react if hit by a head-on collision, either, and the town that is featured in Farming Simulator 2014 is a sleepy one indeed; it’s rare to see more than a few moving bits on screen at any one time. 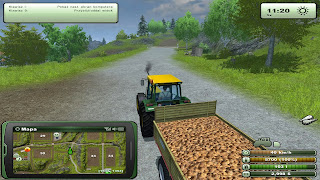 Players can also jump out of the vechile and wander around in first person, but since there’s nothing to do but admire the (admittedly reasonably pretty) scenery, that’s a rather pointless function. In all, the game’s environment is a bit of smoke and mirrors – it’s there to give players a rather big environment to drive around that resembles something that you might seen in the real world, but it’s there solely for the purpose of presentation and there is no functional need for the town, people, or fellow drivers to exist. The entire experience is exclusively focused on the farmland itself, but just as a model train set looks better when there are plastic buildings and people around it, so to does Farming Simulator benefit from having an environment around the fields of crops.

With multiple types of crops to grow and sell and plenty of different equipment to buy and land to field, there’s a true wealth of content in Farming Simulator 2014. If you can look past the fact it was clearly built on a budget (it looks good, but pop-in is a issue, for instance), and are willing to give it a chance despite its theme, then you may well find this a surprisingly addictive and rich experience.

Nintendo and iOS; there’s simply no reason not to