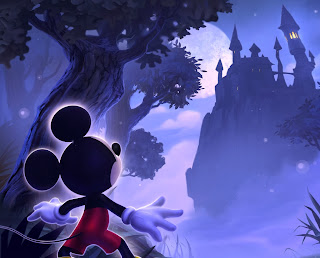 Review by Matt S.
I would never have thought that the developers and publishers of this game would have thought to release it on a platform with virtual controls. As a remake of a early-era game, Castle of Illusion Starring Mickey Mouse HD is the kind of platformer that requires precision skill across small and often rickety areas. And for many that kind of platforming is a no-go without physical buttons.
But it works. It really works. Castle of Illusion is without a doubt the finest platformer available on the iPad, and the perfect experience to have sitting on your iPad for play on the go. It might not be the longest game, but for its price point, it’s genuine quality.

In this game Mickey delves into a haunted mansion filled with illusions which boils down to an excuse to feature the usual range of environments that we find in platform games, and throw a massive range of enemies and traps at Mickey. No two levels are the same, and the game’s broken down into a nice structure of a couple of short levels followed by a boss battle. It’s almost surprising that the game wasn’t developed for the iPad first because the pacing feels perfect for a device where you could want to be playing for anything from five minutes to an hour. 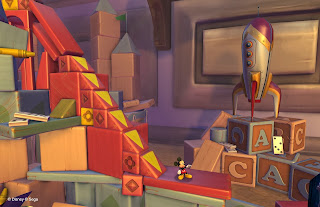 The presentation is simply gorgeous on the retina iPad display too. There’s not many buttons to this game, and they’re located right out of the way of the action, allowing players to enjoy the detailed backgrounds and very Disney charm to the creatures, as well as the personality of Mickey himself. Animations are slick and smooth. Though this remake doesn’t have quite the fidelity of the other recent Disney game remake, Ducktales Remastered, but Castle of Illusion is impossible to fault in its own way.

There’s even a neat little narrator that chats along as you explore providing helpful pointers about what’s going on and where to go next. Without the narrator some of the puzzles might be a little obscure, so it feels a like a cheap approach to design at times, but it’s easily forgivable thanks to its sheer charm.

The only time I found myself uncomfortable was the rare moment of 3D platforming. As long as Mickey is running around on two dimensions the virtual controls work so incredibly well that I actually forgot I wasn’t playing this on a console with buttons. But the 3D sections didn’t nearly work as well. The virtual stick started to feel unresponsive and the smaller platforms became much more of “hold the breath” affair. These sections are not that prevalent through the game, but a sure sign that we a while away before a developer can nail a 3D platformer on the iPad. For most of the rest of the game the odd mistake doesn’t matter too much anyway, as Mickey can take plenty of hits before dying, and for the most part missing a platform simply deposits Mickey on a different path through a level, or in a safe spot to reattempt the previous section. 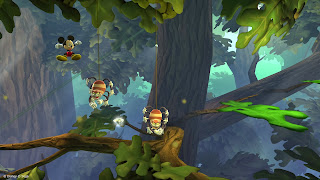 Levels are linear but filled with secrets. With no time limit and a concentrated level design, exploring the levels to track down these secrets is enjoyable without any real potential to frustrate. If there’s any real criticism that can be leveled at this remake its that for all its quality and production standards there’s nothing truly memorable about it. It’s enormous fun but there’s no great sense of achievement nor drive to play the game through again. This could be because I’m more of a fan of Disney’s ducks than Mickey, but I did feel a great urge to replay Wayforward’s Ducktales. I’m not going to pretend that’s anything more than a personal preference though. Objectively there’s nothing to fault here and I’m certain that there are people out there that will get hooked on the game and replay it multiple times.

Ultimately, Castle of Illusion is Mickey Mouse, it’s Disney, and it’s quality. It’s a game that children will pick up and love, and adults can get nostalgic over. It’s yet more proof that with very few exceptions, the iPad is able to do everything that traditional consoles are capable of.

– Review by Matt S.
Editor-in-Chief
Find me on Twitter: @digitallydownld