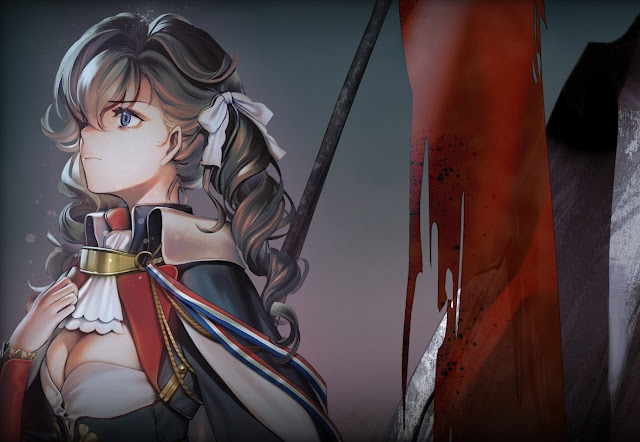 It’s fascinating to see what a difference a console release can make. Earlier this year I first played Banner of the Maid when it released on PC in English. I had a fine time with it, but as a Final Fantasy Tactics-like JRPG, I felt like I would prefer it on console. As it turns out, I was right. Banner of the Maid on the Nintendo Switch isn’t in any way different to the PC original (and that is a pity in one particular area, which we’ll get to), but the genre it belongs to fits the Switch better, so I’ve found a new level of appreciation for it.

Related reading: My review of the game’s PC release.
Banner of the Maid is a very anime take on the French Revolution, as well as the assent and military campaigns of Napoleon Bonaparte. Only you’re not playing as Napoleon. You’re playing as his sister, Pauline, who was a real person, though not the military commander that she’s positioned as here. Pauline is an excellent protagonist, not least because her character design is… well, it just encourages me to be thirsty, is all. She’s freaking pretty, what with that long curly hair and those lovely legs and that perfectly-sized chest that she barely squeezes into the highly anime take on the formal gowns of the era and… you get the point. I like Pauline. Actually, all the characters in Banner of the Maid show impeccable levels of both detail and fan service in their art design; it’s easily as good as anything that Nintendo has come up with for Fire Emblem or Square Enix has done with Final Fantasy Tactics. Previously, the most aesthetically-pleasing tactics game on Switch was the port of God Wars, but Banner of the Maid might just pip it.

Away from the character portraits, the game’s still gorgeous, as chibi little characters run around colourful, vibrant battlefields and then shoot at one another with adorably chibi little muskets. Here the Switch really comes into its own, because in handheld mode the screen size is just right to appreciate the level of detail that has gone into the aesthetic, while also being able to enjoy how cute it all is. On bigger screens, the cute is a little mitigated by scale. Thanks to this art style Banner of the Maid never gets dull. Each new battle map is a joy to campaign over, and the outside-battle social and factional stuff is pleasant too, because while Banner of the Maid is wordy as a visual novel, if nothing else you can just enjoy that character art for Pauline. 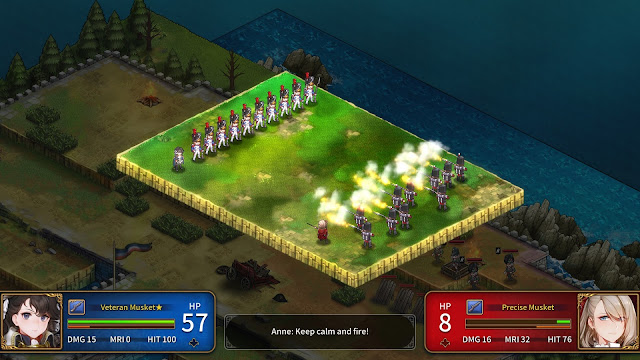 Let’s get to the bugbear in the room, though; Banner of the Maid’s localisation is inadequate for a game that is partly visual novel, and it annoys me that the developers haven’t used the influx of cash from the PC English release to take a second pass at that. We’re talking about a story-driven game where characterisation, tone, and narrative has been compromised by a very mundane effort at translation; one that is too literal, too grammatically compromised, and too clumsy to be properly enjoyed. It’s not so bad that it’s impossible to follow the story (and, sadly, that does mean it’s still a step up on some other VNs on Switch), but it’s not good enough, and that localisation is the only real line and boundary that stands between Banner of the Maid, the plucky indie effort, and the properly-produced, professional efforts by Nintendo, Square Enix, Kadokawa Games, NISA, and others.

Under normal circumstances, I wouldn’t recommend a game with a compromised narrative like that. I play games for the narrative experience first and foremost, and a game that constantly breaks any effort to be immersed in its narrative by being so completely unnatural about it is a game that I have difficultly getting along with. The thing is, though, Banner of the Maid is just that good that I can overlook the narrative bits. It’s such a smooth, streamlined, elegant and well-balanced tactics game that I keep finding myself too engrossed with the actual gameplay to care that the developers have butchered the rich narrative opportunity offered by setting it during the French Revolution. Banner of the Maid doesn’t try and do anything pretentious or “innovative” with the genre, and its no-nonsense approach to classical tactics action is admirable as a result. It brought me right back to a time where Tactics Ogre, Onimusha Tactics and Final Fantasy Tactics Advance had me chewing through batteries on my Game Boy Advance and such a rate that in hindsight I’m pretty sure I was single-handedly financing zinc mines (remember the days you needed disposable batteries for your handheld game consoles)? It’s an oddly nostalgic experience, in other words, and it’s charming for that.

Banner of the Maid is a lengthy game, and despite the narrative it’s good fun seeing the way it name-drops generals and other personalities of the era. In fact, the more read-up you are on the French Revolution and Napoleon the more enjoyable the overall experience is, because you’re able to fill in the blanks that the translation leaves open, and interpret what the developers were aiming to do with the characters and settings. It’s by no means a realistic or authentic take on the French Revolution, but the development team have clearly done their research and from costuming to character quirks, everything in this game is appropriate to a fanservicey anime period drama. 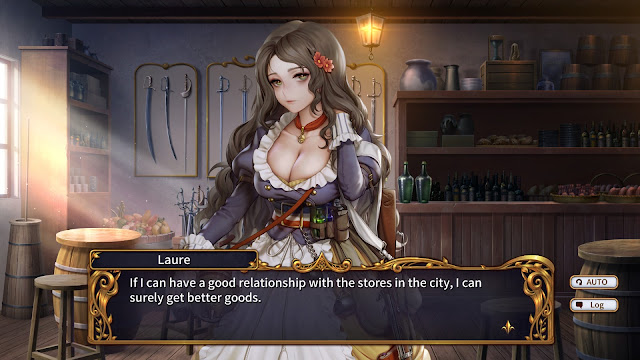 There’s not much else I have to say about this game that I didn’t say in my review of the original PC release. The developers have done what is needed to bring the game to the Nintendo Switch as a highly proficient port, though they’ve done nothing of substance to update what the original release offered. Aside from the localisation, it didn’t need any updating anyway, and even considering that terrible localisation Banner of the Maid is one of the most refined, enjoyable tactics JRPGs on the console. Also, Pauline really is an excellent protagonist, and she is just that pretty. I hope it’s not the last we see of her… now that this is on Switch, let’s get her into Smash Bros next. I might even start playing that game again if she was. 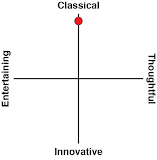 The critic was provided with a code for review.

“Masterpieces”: What are they, and do we have them in videogames?