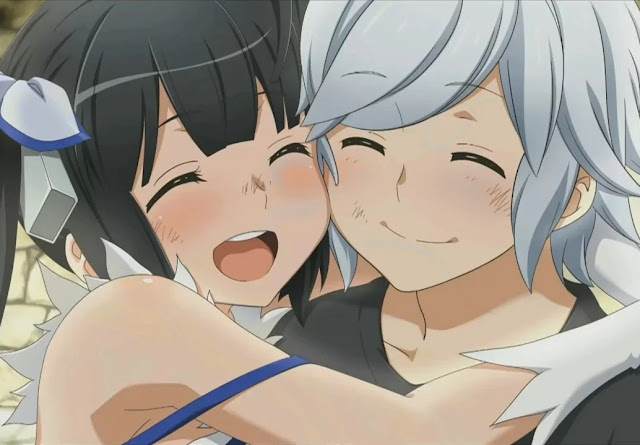 Is It Wrong To Try To Pick Up Girls In A Dungeon? has got to be one of the neatest titles for an anime or visual novel. It’s immediately descriptive and you know exactly what you’re going to get going in (i.e. fantasy action with a healthy dose of fan service). Prior to playing this game, I had no exposure to the property, but now, after having played it, much like Fairy Tail from two weeks ago, I’m keen to learn more… that is to say that my “to do” anime backlog has grown uncomfortably big in the last month.

I will say those that while I was able to follow along with the narrative of Is It Wrong… (I’m not going to type out the whole title again), there is more assumed knowledge going in than there was with Fairy Tail. The developer, Mages, clearly figured that anyone who was interested in playing this game would already know who the characters were and what the world’s lore was like, and so I always felt that I was missing some context to explain why I should care about what’s going on. Of course, given the dollop of fan service that it offers and entertaining gameplay loop backing it, I played it anyway, and as mentioned, the overall narrative is comprehendible. It’s just not as finely tuned towards drawing new players in.

I was also a bit disappointed to discover that it was an action-based game. From screenshots, it looked like it would be one of those isometric, turn-based, roguelike dungeon crawlers in the vein of Chocobo Dungeon, Pokemon Mystery Dungeon or Shiren the Wanderer, and Is It Wrong… would have been better off if it was like those titles. Is It Wrong… has some generally weak AI and a clumsiness to the combat system which will mean that a lot of people will dismiss it over the many, many examples of precise, elegant, and downright balletic action combat that we have to choose between in the indie space these days. 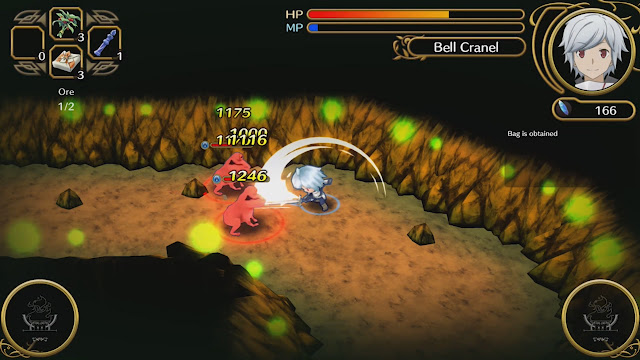 Once the game settles into its own rhythm though, it’s actually quite enjoyable. Play is broken up into short little missions (sometimes very, very short) where you’ll run around a random dungeon, beating up a range of different enemies in the bid to either reach a certain point in the dungeon, defeat a certain number of enemies, find a particular item, and so on. It’s all very standard genre stuff. To fight the enemies you’ve got weak, strong, super, and magic attacks, as well as a dodge button, which is of particular importance in Is It Wrong…. After you complete a combo there is a moment of downtime before you’ll be able to start the next, and during that time the enemy will generally be able to land an attack on you. Using the dodge button liberally to weave in-and-out of enemy mobs is key to preserving your character’s health, and preventing them from being pushed up against a wall and blocked in, which can end things for them quickly.

Outside of combat, as far as the RPG elements go, there’s a lot of menu options for relatively little to do. There are requisite upgrade systems and stores to buy things from, but generally speaking, Is It Wrong… is quite a simple, streamlined game. It’s the visual novel side of things where it gets exciting.

Is It Wrong… does everything that you would expect for a fanservicey VN – there are plenty of cute characters and some gorgeously-drawn key art scenes that highlight… well, the various character’s bodies very nicely. There’s also plenty of humour, with the standard blend of anime character tropes coming together to bounce off one another in an appealing mix of teasing antagonism right through to sheer thirst for one another. A big part of the appeal of this side of things will be the ability to go on “dates” with your favourite characters, and those “Date Events” activities are nicely-written and help to flesh out virtually the entire cast. Mages is, of course, a well-known specialist of the VN genre in Japan (indeed, thanks to the likes of Steins;Gate, it is one of the most respected of all), and Is It Wrong… once again demonstrates that the team understands everything about the visual novel form, structure, and pacing, making for a game that never becomes tiring. 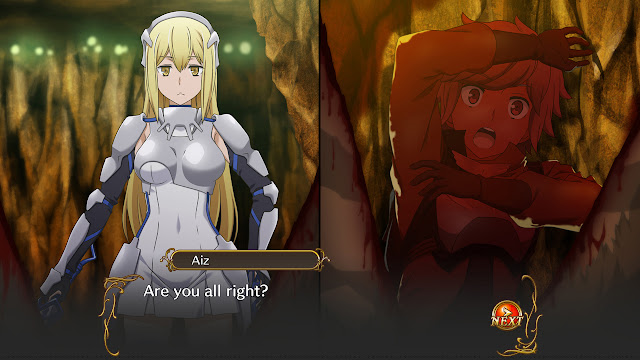 In terms of presentation, Mages has kept things clean and simple. The dungeon crawling elements show some decent variety in enemy and environment design, but as with all roguelikes, the random nature of it means that there can’t be much complexity or creative design by nature. The visual novel side of things, meanwhile, lacks the gorgeous animation and/or rich detail that we have seen in titles like Steins;Gate, Date A Live or Death Mark, however, it’s also a clear cut above what the indie developers can achieve, and at a brief glance at stills from the anime, the developers have brought across the aesthetic from the base material nicely.

My biggest problem with Is It Wrong… is that I can’t really analyse it beyond this, and I don’t know if that’s because the anime itself is light to the point of irrelevance, or if the game struggles to bring across the deeper themes while maintaining the blend of snappy pacing and JRPG elements. There’s nothing wrong if this is all there is to Is It Wrong… not everything needs to be a philosophy thesis and certainly, there are a lot of anime and games that I enjoy that have no such aspirations. I’m the guy that loves Dead or Alive Xtreme 3. Looking at pretty girls is plenty enough entertaining to me. However, the visual novel side of Is It Wrong… does throw me a little. There are fanservicey visual novels that pack a lot of narrative and thematic depth into them – think Utawarerumono, Saya no Uta, the Nurse Love series or If My Heart Had Wings. Is It Wrong… either lacks that extra layer that those games have, or I’m struggling to pull it out of the game’s narrative, isolated from the context provided through the base anime.

Still, there’s a lot to admire in this game, and it only gets better once you’ve hit the end and are ready for the extra mode, where you’ll be able to really test out your mastery of the combat and ‘crawling. Is It Wrong To Try To Pick Up Girls In A Dungeon is entertaining stuff. It’s neither the perfect dungeon crawler nor the most stand-out visual novel, however, the blend of the two, coupled with the strong anime license leveraged with the greatest of competencies, still make this one a very solid time-filler. 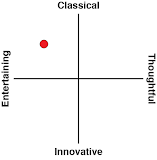 The critic was provided a code for the purposes of review