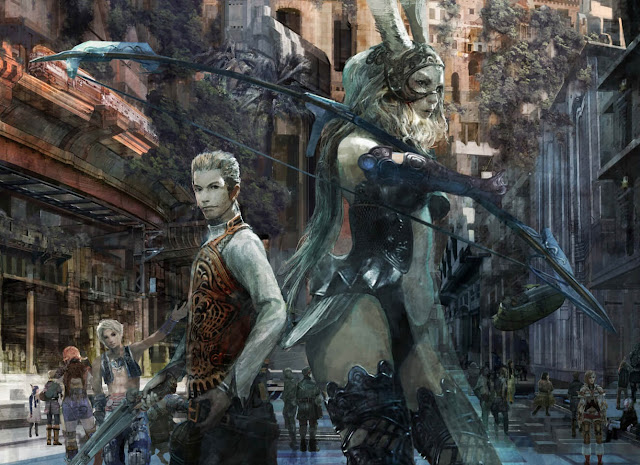 With Final Fantasy XII now released on Nintendo Switch, there is a lot of Square Enix goodness to enjoy on the console. A lot of it has come close to one another, too, and if you relatively new to the series, it might be difficult to figure out where to begin.

Luckily, we’re here for you.

Rather than write individual reviews for each of the titles with their new releases on Switch, I figured a better way to go would to be to briefly provide an overview to each of them within a single article, highlight the key theme of the game, and whether it’s still worth playing in 2019 (spoiler: they all are on one level or another).

This is, effortlessly, my favourite Final Fantasy. The epic quest of Ashe, Balthier, and friends took Final Fantasy in some new and interesting directions, with a great combat system, a brilliant score (even though, for the first time Nobuo Uematsu was not involved in the scoring), and an amazing setting in Ivalice. 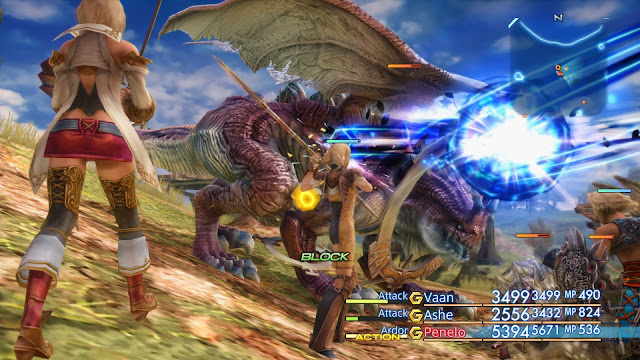 Final Fantasy XII’s key theme is moral relativism between nations and political agendas. This is one of the rare Final Fantasy titles (and JRPGs as a whole) that actually raises questions about the inherent righteousness of the cause of the “heroes”. You’re asked to question whether Ashe & Co are doing the right things for the right reasons, and whether the nation that they’re fighting for is an inherent good.

Conversely, while the antagonists of Final Fantasy XII are certainly hostile towards Ashe, and many of their own methods highly questionable, the cause that they represent can be easily argued to be a just one. In many ways Final Fantasy XII presents an analogy for the political and ideological tensions between “east” and “west” in the real world, and given the escalation of political tensions worldwide, that makes the game more poignant and worth engaging with than it was when it first launched. 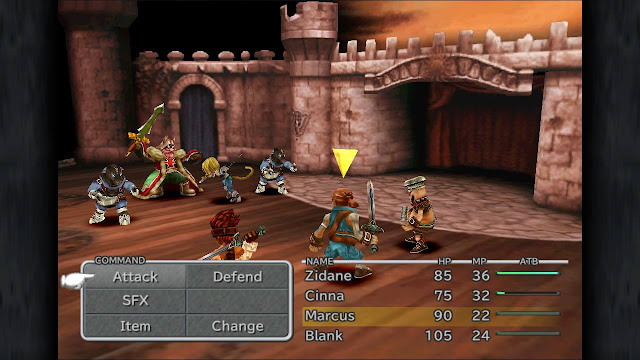 But what is actually interesting about Final Fantasy IX is not that presentation; it’s the themes that it explores. Almost all the major characters in IX are a riff on the topic of personhood; what defines someone as a person. At what point should a person be seen as a not-person, and can we look at “created” organisms as persons in themselves?

More to the point, does any of that matter, and how does all of this shift our understanding of everything from morality to determinism? It’s quite clear that the writers of Final Fantasy IX had spend time reading Immanuel Kant at some point through their lives, and all of that thought and debate flowed its way into the game’s script. There’s nothing wrong with that… and indeed, Final Fantasy IX’s narrative is rich, well realised, and holds up incredibly well to this day.

It’s hard to look past Tidus’ laugh in Final Fantasy X, or his irritating daddy issues. Or Rikku’s legs. But we should, because Final Fantasy X is another game in the series whose narrative depth, and the discussions that it encourages, continues to take on new meaning as people dig further into it and discuss it at greater length. 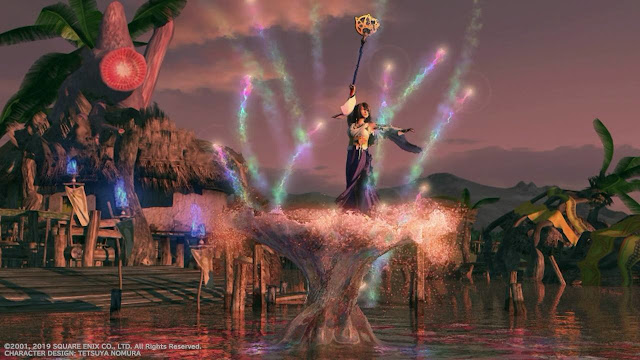 Final Fantasy X’s thematic core is the role of religion in society and, in particular, the tension between organised faith and spirituality. I’ve read plenty of arguments online that Final Fantasy X is “anti-religion,” though it most assuredly is not. It’s a game with a very deep respect for a Shinto-like appreciation of the world and its objects as forces of spirit.

Where Final Fantasy X is critical, it’s of organised religion, and the potential for such religious bodies to become dogmatic or corrupted. Even then, it recognises an inherent social value in providing people with spiritual guidance, so perhaps it’s better to characterise Final Fantasy X as a warning against unchecked organised religion. Given that it was state-sponsored religion that was a principle fuel that drove Japan into World War 2, this message is a poignant reminder that Japan is one of the few nations, today, that is both firmly religious, and firmly in opposition to the blending of government and religion.

Final Fantasy X-2 can’t be bought separately on the Switch – if you buy Final Fantasy X, you get this as a bonus. It’s a direct continuation of Final Fantasy X’s story, but the game also has an identity and thematic push all of its own. 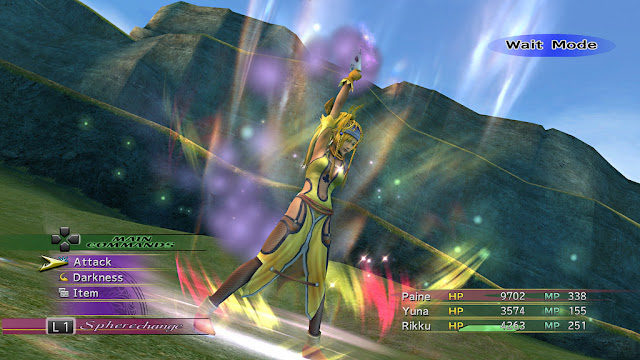 Final Fantasy X-2 is an exploration of another side of modern Japanese culture – that of the pop idol and the value of celebrity to a society. The three protagonists of the game – Yuna, Rikku and Paine – form a treasure hunting group that is very much reminscient of a J-Pop group in organisation, and this gives you an excuse to revisit all the locations in Final Fantasy X, while dressing your characters up in some very fanservicey gear, and putting on the occasional music concert.

As an extension of Final Fantasy X, there’s a nice sub-thread in Final Fantasy X-2 which highlights parallels between how organised religion has been replaced by a worship of celebrity, while from a gameplay point of view, Final Fantasy X-2 has a dynamic, exciting combat system which basically established what we would play in the Final Fantasy XIII trilogy.

Of all the titles in the Final Fantasy series, I struggle the most to recommend Final Fantasy VII. It’s not that it’s a poor game, because it is brilliant around its narrative. It’s just that the visual design is so primitive and, at times, downright broken, that it’s hard to actually sit down to play this now. For the Switch version of VII there’s high-res character models, but all that does is make the clash with the pre-rendered environments even more extreme… and those characters didn’t have character models worth upscalling in the first place. 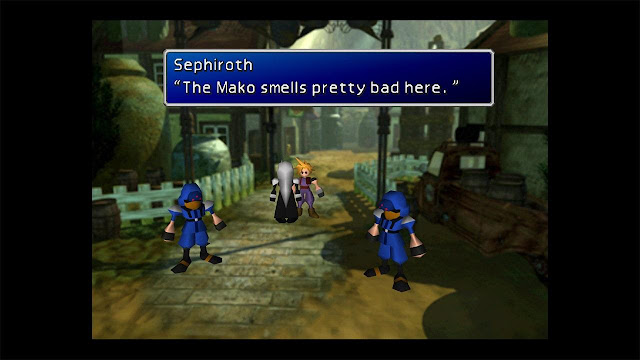 But the narrative of Final Fantasy VII remains so poignant, considering that it acts as as warning against Ayn Rand-style unfettered capitalism and the exploitation of the planet. So, if you can handle the ugly aesthetics and relatively simple (though enjoyable) combat system, this game’s narrative is plenty worthwhile. And boundary-pushing. It’s a game that lionises eco-terrorism and advocates for a violent revolution against the status quo. Unlike Final Fantasy XII there’s no questioning the status of the player characters as heroes, which makes Final Fantasy VII the kind of bold, desperate statement that would simply not be made in this day and age.

It’s just unfortunate that Square Enix can no longer release versions of Final Fantasy VIII. This “trilogy” of PlayStation One-era Final Fantasy titles highlighted the very best of the development team; having progressed past the limitations of the spite-and-cartridge era, the writers started working with more text and deeper themes… before Final Fantasy became so mainstream that the series couldn’t afford to really push boundaries with those themes.

(As a side note, there’s also a bug in the game which can break it and force a re-start. Details on that here – it’s from the PC version, but also present in the Switch release)

Chocobo Dungeon is not a main numbered Final Fantasy, but as spinoffs go, this is one of the best ever. As a mystery dungeon, it features a near endless stream of randomised labyrinths to explore. As the bright and cheerful Chocobo mascot, it’s also an incredibly charming game, with a cracking soundtrack that pulls nostalgic notes from the entire heritage of Final Fantasy music. 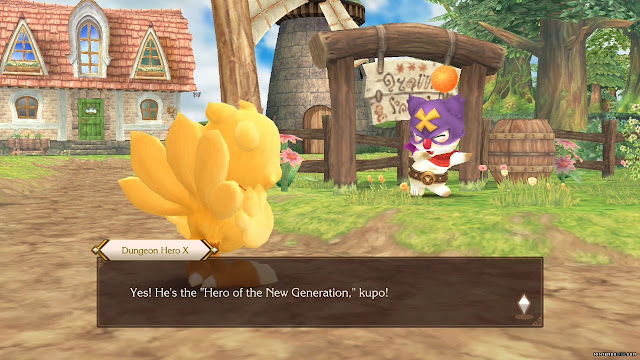 Chocobo Dungeon doesn’t have any particularly deep themes; its core narrative spins around the value of memory, with Chocobo needing to jump into the psyche’s of the residents of a town in order to rescue them from a malaise that has come from forgetting their memories – and therefore losing their identity. It’s a theme that could be explored deeply, but Chocobo Dungeon is very light touch about it.

That’s not to criticise the game, though. Chocobo Mystery Dungeon is designed to be a mascot game – something that people love playing because the love the particular character at the heart of it. Chocobo is an ideal mascot to lead a video game. He’s charming and bright, cute, and easy to dress up in all kinds of ways to suit the Final Fantasy theme (you can give Chocobo different “jobs”, like knight, dark mage, etc, and he’ll wear a different costume each time). And while Chocobo Mystery Dungeon isn’t necessarily an easy game, it is one that just about everyone can get stuck into and love.

World of Final Fantasy was the first Final Fantasy released on Nintendo Switch, and has been sitting there for a while now. On the one hand, it is an odd choice for the “first” on the console. World of Final Fantasy is pure fan service. Not in terms of anime boobs and swimwear, of course. Rather, this game is a celebration of the heritage of Final Fantasy, as you go through and experience familiar locations and meet favourite faces. 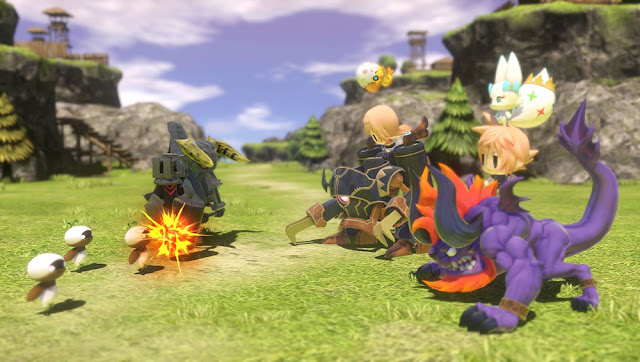 This is wrapped up in a rather lovely Pokemon-like monster collecting combat structure, that allows you to collect up all your favourite monsters from the Final Fantasy series – another fan favourite part of the experience.

The only downside to World of Final Fantasy is that it does have a lot of assumed knowledge, so if you are new to Final Fantasy, a lot of the game will fly over your head. Aside from the fan service and inner-series nods, the core plot itself isn’t overly interesting, and the two main protagonists are rather dull by design – the developers wanted you to focus on the virtual museum tour of Final Fantasy, rather than these new characters. But still, after you’ve played a couple of titles in the series, you’ll be ready for this delight of a game too.