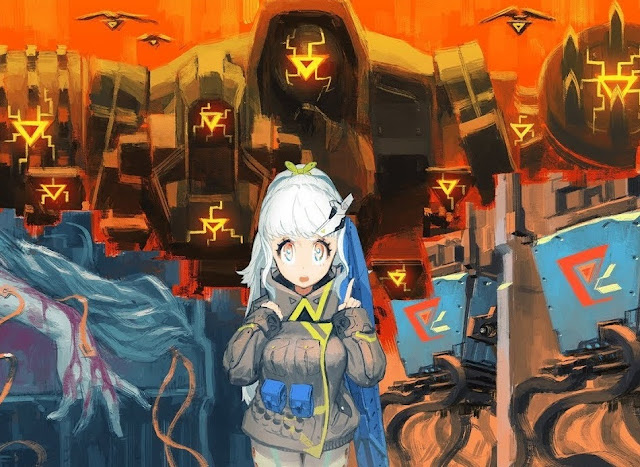 You could be forgiven for believing that Japanese developer Game Freak is only responsible for bringing the world of Pokémon – the series it is best known for – to our games libraries. Since the company’s inception in 1989, more than fifty percent of its releases have been in the Pokémon universe. This franchise has spanned 19 separate titles across multiple generations, or 33 if you really want to split hairs and include the counterpart releases. So, what do you do when you are all Pikachu’d out?

Any creative team, no matter the dedication, pride or love poured into a franchise, is sure to tire at some point as they find themselves experiencing their own Groundhog Day. Sometimes developers need to rise to new ideas and explore new horizons. Over the last few years, it seems Game Freak is aiming to do just that, and the newest effort is in bringing Giga Wrecker Alt to the Nintendo Switch.

Originally released on PC in 2017, Giga Wrecker Alt – a dystopian side scrolling platformer which sees you balancing Metroidvania-style combat and navigation with physics-based puzzles -finally makes its way onto consoles with a range of new features and updates. 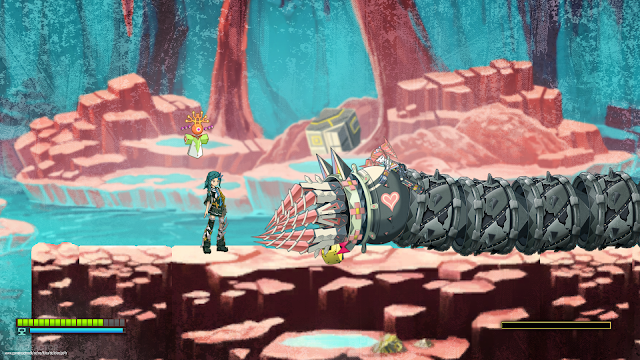 Set in 2035, the game sees you take control of Reika Rekkeiji, a prisoner of a technologically advanced robotic army of unknown origin following their invasion of Earth three years earlier. The war decimated the human population and one-by-one cities across the world fell to the machines whilst the remaining survivors were forced into hiding.

Following your escape from prison you receive augmentations which not only save your life, but allow you to manipulate the world around you, principally by using nanomachines and the debris generated as a result of destroying enemies. This serves as the game’s base mechanic as you tackle increasingly difficult puzzles and collect more and more debris to take out bigger and bigger machines until eventually you are carrying around balls of mechanical parts so big Optimus Prime is nervously checking himself for missing parts.

The story is nothing we haven’t read, seen or played through before, and there are no real surprises or boundaries pushed here, however, it’s carried through with surprisingly endearing characters. Whilst I can’t say I was gripped, I was at least to some degree invested in the characters and their mission for revenge. Much of the narrative is delivered through regular conversations as you traverse the map, and that provides insights into each character, their motivations and the relationships between them. 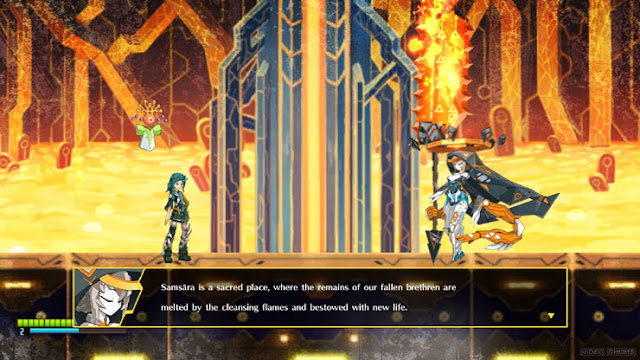 The problem with Giga Wrecker Alt is that its pros and cons seem constantly at loggerheads with each other and I quickly find myself swaying from enjoyment to frustration with its gameplay. Whilst the core mechanic of obliterating your enemies into smaller pieces, only to absorb them and smash even bigger enemies is enjoyable, Giga Wrecker Alt really loses its way in its controls. Platformers by their very nature require a level of command and precision that just isn’t present here. Jumps feel slow and clunky and I often found myself attempting to make tight or precise jumps which frequently resulted in jumping further than I wanted to. This made not only puzzles but particularly boss fights, coupled with poor checkpoints, seem tedious and after dying each time the game came to feel more like Loading Simulator 2019.

But just when I’m teetering on the edge of irritation, the game throws some very well thought out and intricate puzzles that really tested my wits, providing the satisfaction upon solving them to keep calm and carry on. As with many games reliant on physics, the results of your solutions to puzzles can sometimes be unpredictable. Whilst many may find this inconsistent, I personally enjoyed knowing that, in some cases, there isn’t always one way to fix a problem and I sometimes found my answer to physics unintentionally creating a scene of utter chaos that miraculously worked.

The battle between good and bad doesn’t stop there. The map is divided between four key areas with each having its own style and graphical representation, but navigating between these areas is confusing and poorly executed. Each room is displayed on your map but gives little to no information on what the room contains or where it leads to. And although interacting with certain objects may leave a symbol on your map, trying to find the room you were in half an hour ago, so you can finally enter the door that was inaccessible before, is like playing Marco Polo on your own. 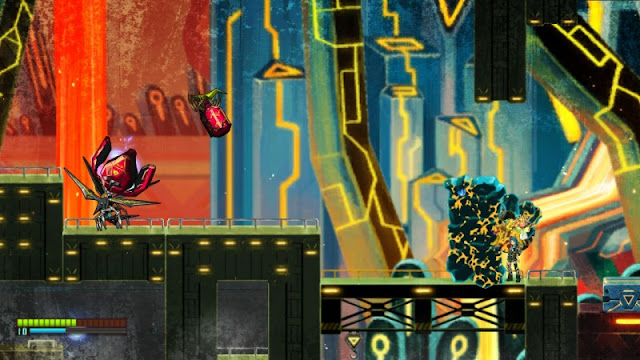 Thankfully, each area has some pretty great music and although the character animations are somewhat lacking, I found some of the graphics representing each area really beautiful with bright colours really amplifying the feeling of a neon dystopia we find ourselves in. I often took screenshots on my Switch with the hope that I can one day utilise the artwork as my screen background when Nintendo finally give into my demands to introduce customisation to the home screen.

So, is Giga Wrecker Alt Game Freaks new jewel in the crown, a diamond in the rough or the scrap metal we find ourselves collecting throughout its gameplay? Despite a lack of originality and questionable controls I found myself coming back to Giga Wrecker Alt to tackle that puzzle, overcome that boss or just explore its world. If you are looking for a ground breaking new entry in Game Freak’s reserve or something similar to the Pokémon titles then this may not be the title for you. However, Game Freak’s team has stepped out of their comfort zone and developed a game with some rather satisfying qualities which may just tide you over.