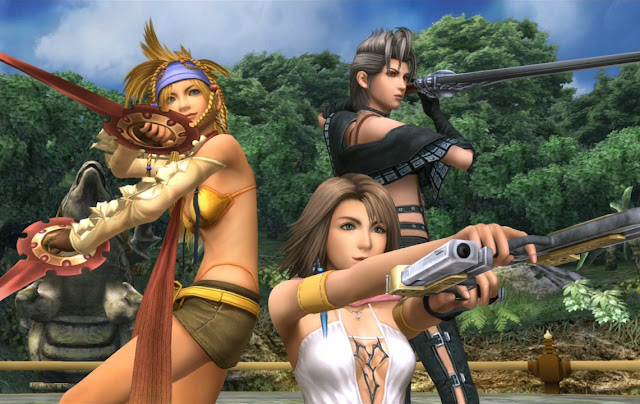 Final Fantasy fans – and the broader gaming community – have a complex relationship with Final Fantasy X-2. Despite both games in the mini-series being reasonably highly rated games at the time, over the years, Final Fantasy X has been (rightfully) lauded as an absolute classic, while Final Fantasy X-2 has been pushed back in many people’s estimation.

Related reading: We also took a look at some of Final Fantasy X’s themes this week, which you can check out here.

But was this fair? Or is Final Fantasy X-2 something more than Rikku, Rikku and some more Rikku? Having recently had the chance to replay the game (again) with the PlayStation 4 Remaster, I’d argue that it is much more. In fact, as a response to Final Fantasy X, I’d argue that it’s very important that fans play the sequel in order to fully appreciate and enjoy the original. 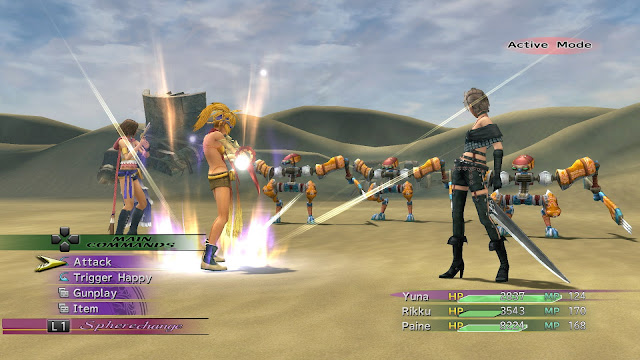 Warning: light spoilers ahead – if you haven’t played this game before, and don’t want it spoiled, then please don’t read on.

One of the most interesting themes to emerge from Final Fantasy X-2 is in the way Square Enix positioned it in such a stark contrast to its predecessor. In Final Fantasy X, under the yoke of an oppressive and repressive church organisation, the people of Spira were effectively forced into a life of reflection, piety, and holiness. The only entertainment that the people of the original were even really allowed was blitzball, which alludes to the life of simplicity and poverty that those in most religions are expected to live. At one point early in Final Fantasy X, Tidus asks Wakka if a blitzball match even matters after the monstrous Sin devastates a small village. Wakka’s response was poignant, with words to the effect that blitzball was the only thing that gives the people something to forget their woes in life, and something to cheer for.

The change in tone is immediately reflected in each of the game’s main characters and their attire. Yuna’s relatively conservative dress in Final Fantasy X is replaced by hotpants and open top. Rikku, who was simply attired in shots and top in Final Fantasy X, is now stripped down to a bikini and a small wrap that passes for a miniskirt. Is it fan service? Of course. But it also serves a purpose, in representing a world newly liberalised from the kind of conservative values so that even the holiest and mightiest of heroes are freed to pursue careers as pop musicians. 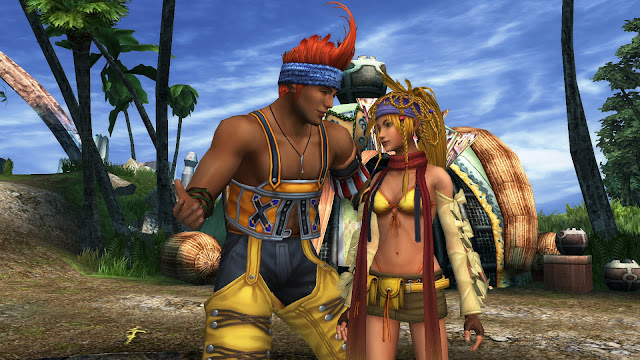 We further see this theme at play when the characters in Final Fantasy X-2 need to communicate with the masses. Now that they no longer have the backing of the church in order to demand the obedience and attention of the people when they need to get a message out, the characters instead turn to popular entertainment for their propaganda. When Yuna and her team need to pass on information to a mass of people they put on a concert, for example. It’s Square Enix’s not-so-subtle way of making the argument that while modern culture might have broken the stranglehold that organised religion holds over it, we’ve simply replaced it with the cult of celebrity and a urgent need for fulfilment through entertainment.

In this context, the direction that the combat system takes makes even more sense than as a clever way to build on the traditional ATB system that we loved in Final Fantasy IV through IX. The need to keep switching between jobs in battles forms a commentary on the fluidity with which people move between careers now, in order to achieve their personal goals (in this case, a specific set of skills). Where Final Fantasy X largely locked characters into specific tasks within the game (I know that the sphere grid give you freedom, but it’s clear the game wants Yuna to be a white mage type, and Rikku the thief), as befits the traditional idea that a person would lock themselves into a specialty for life as they come of age, Final Fantasy X-2 rejects this notion, offering the very progressive alternative that people can juggle multiple specialties and careers through their lives.

That spirit of individuality and flexibility also gives each of the characters of Final Fantasy X-2 a different set of goals, too. Yuna is freed of her responsibilities to the church, and her allies are no longer responsible for getting her to the end. So instead the team are able to focus on a series of personal goals. They might get pulled into some of the emerging political landscape, and Yuna’s celebrity means they don’t get to be completely free them of demands on their time, but Final Fantasy X-2 is nevertheless also reflective of a modern world in which commitment to the self is considered as worthy, if not moreso, than commitment to the community or an ideal. 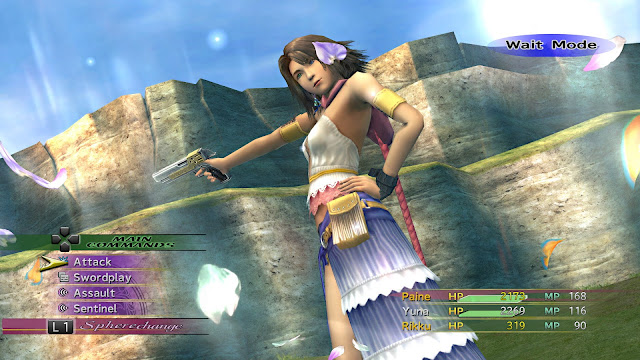 The two games are careful not to judge or form value judgements in the way they contrast the values of the two very different social structures that they present. But in playing off tradition and spirituality in contrast to modern attitudes, the way that Final Fantasy X and X-2 play off one another is like a question-and-answer conversation; if Final Fantasy asks us to consider spirituality and its place in the world, Final Fantasy X-2 is the answer to what happens if you then remove it from the social equation. If Final Fantasy X espouses the values of traditional lifestyles and simple living, X-2 shows the advantages of progress. The two games interact and complement one another on a profound level, and so it is quite evident that Final Fantasy X-2 is anything but a pretty face or cynical fan service. In fact, I would argue that it’s impossible to fully appreciate Final Fantasy X without playing its sequel, so symbiotic as they are to one another.