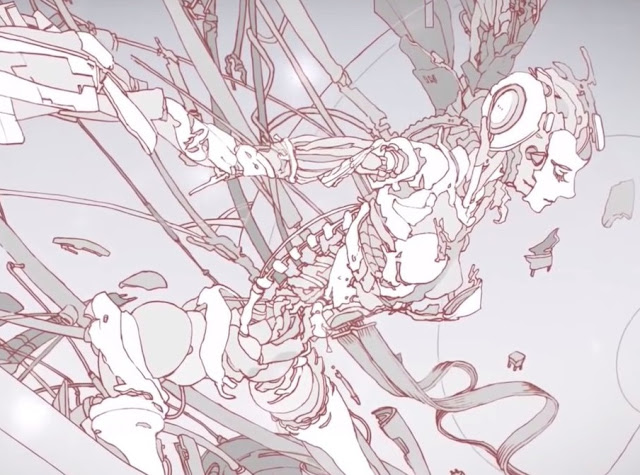 Following on from Voez, and later Deemo, we finally have Cytus on our Nintendo Switches, and therefore all three rhythm game franchises from Taiwanese developer, Rayark. This is a supremely talented team of rhythm game developers, and with over 200 songs on Cytus Alpha, they have produced a lengthy, extended, tour de force of some of the best rhythm game action you’ll ever see.

As with the best rhythm games, Cytus Alpha is deceptively simple to play. A single horizontal bar moves up and down the screen, like a metronome in time with the music. You need to tap circles on the screen in time with the bar passing through them. The more accurate you are at that, the better the eventual score. The challenge is, firstly, in staying in proper time when the screen is filled with icons and you’re frantically tapping away… and then doing so with such precision that you get a “perfect” score for that track.

It’s not easy. No good rhythm game is easy, because a good rhythm game should emulate the experience of playing music, and getting good at playing music takes practice. Cytus offers a very abstract vision of the motion of playing a musical instrument, where Deemo was a far more literal emulation of the experience of playing the piano, but the delightful thing about Cytus is that, as you get comfortable with the way your hands move across the screen, it really does provide the same physicality and feeling as moving fingers across a real instrument so, abstract or not, it encapsulates the experience perfectly. 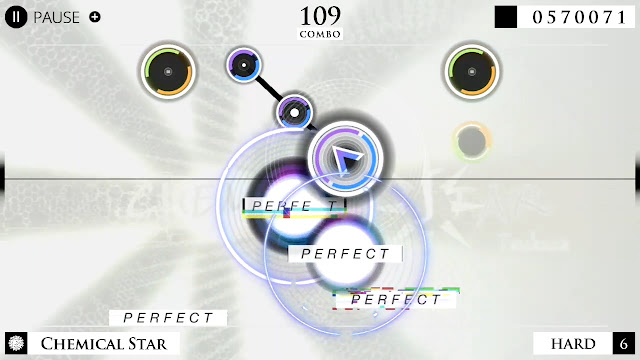 There are, of course, difficulty settings and ratings for each track. Hunting out the difficulty “1” and “2” rated tracks are the perfect way to ease yourself into the game if you’re inexperienced at rhythm games, because other than the briefest of tutorials, Cytus Alpha isn’t interested in helping you get into the game. It won’t take long to master those, though. By the time you’re up to difficulty “5” and “6” you’ll need to be comfortable with the basic idea of musical rhythm, and then the upper echelons are for people who have spent a lot of time playing Cytus Alpha and/or rhythm games. Each track has a maximum score, for a completely perfect run, and once you’ve got that, there’s no reason to replay the track, unless you just love the music that much. Thankfully, with over 200 songs, Cytus also lasts longer than most other rhythm games. Its structure means that it doesn’t offer the effectively endless challenge of a Hatsune Miku or DJ Max, but you’re not going to get bored of it in a hurry.

Each of Rayark’s rhythm games have a different focus insofar as the music goes. Deemo was rooted in piano play, with every track implementing the piano as the hero instrument that you are in control of. Voez was more tuned towards popular music. Both games had exceptions to the rule, but were solid on their overall theme. Cytus is no different, and with Cytus, you’re looking at pulsating, hardcore electronic music. The kind of music that buzzes with verve and becomes quite hypnotic when you’re also watching the steady movement of a horizontal line up and down. This isn’t usually my kind of music, but the theme suits the gameplay perfectly, and the hypnotic nature of it meant that I frequently lost time as I played. Tracks couldn’t be more than two minutes in length at a time… so how did afternoon shift to evening without me even noticing?

One area where Rayark is weak in is in giving context to the rhythm game action, and Cytus isn’t really different there. The story is mind-numbingly dull to move through, and in recognising that the developers buried it in a menu well away from the main game. Similarly, the play area is functional, clean, and elegant in its minimalism, but the cool abstraction also makes for a purists kind of rhythm experience. There’s no dancing Hatsune Miku in the background to give the music visual context, and there’s no rich sense of culture and history around the music as in something like Pianista or Lyrica. Cytus stands proud as a rhythm game for rhythm game fans, and that is both its most admirable quality (as someone who loves rhythm games), and its biggest limitation (in terms of how many people are going to end up hooked by it). 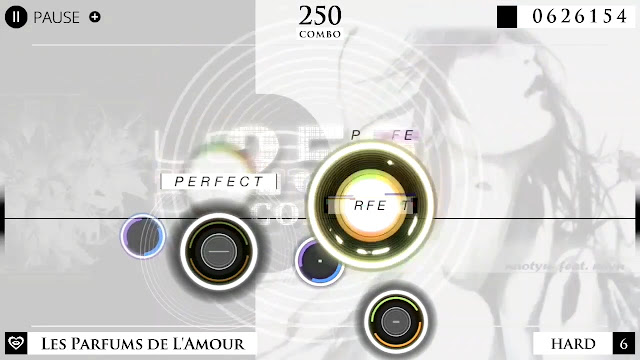 I am also really not a fan of the progression system. With Cytus, you have access to around ten tracks (if that) at first, and you need to tally up a certain score across those tracks to unlock the next “pack” of music. There’s a bit of bonus music thrown in that’s pulled in from DJ Max (or, at least, that pack of music is called “DJ Max,” so I assume that’s where it comes from), but even with that the track list is staggeringly thin at first. Inevitably, to unlock all the music, you’re going to need to spend time playing tracks you just don’t like. With 200-odd songs, of course there’s a lot in there that’s not going to resonate, and forcing players to play those tracks seems to be more like punishment than encouragement to me.

Contrast to Hatsune Miku: Project Diva Future Tone. You buy the game and all 220-odd tracks are unlocked immediately from the start. You play what you want to play, ignore what you don’t, and the game feels like the rhythm game equivalent of a jukebox or karaoke machine as a result. Progression systems in rhythm games are arbitrary, irritating, and don’t add any value to the experience… other than potentially slowing players down so they at least have a chance to find all the music they like within the game and don’t get lost in having too many options at first. That’s a thin defence, though, and while the progression system of Cytus isn’t enough to make me want to dock points (and it’s no different to how Deemo worked anyway, and I loved Deemo), I do think rhythm game developers should consider whether progression systems are necessary in their particular genre at all. Just give players everything from the outset, and let them get on with having fun.

One really nice bonus that’s thrown into Cytus Alpha on Nintendo Switch is the button controls. The mobile game is naturally a touch screen only affair, and because of the way the game is designed, it’s possible to have your thumb covering notes on the screen when you play that way. For many tracks, particularly on the higher difficulty settings, you do need to replay them a couple of times just to learn the button maps so you know when to get your thumbs out of the way. That issue is removed when you’re playing with a controller, and I found Cytus’ button commands to offer an equivalent rhythm challenge to playing with the touch screen. That’s hard to do. With most rhythm games, one option is superior to the point that the lesser option is redundant. 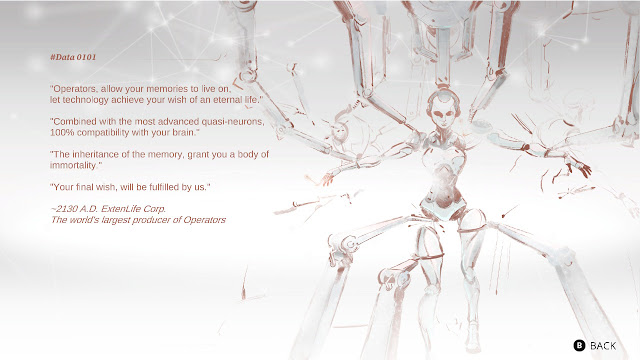 The sheer quality of Rayark’s rhythm games override any small issues that I might have with them, and Cytus Alpha is one of the finest playing rhythm games you’ll ever come across. It’s abstract, minimalist and focused, but it delivers such vibrant rhythm game action that it’s impossible not to love.