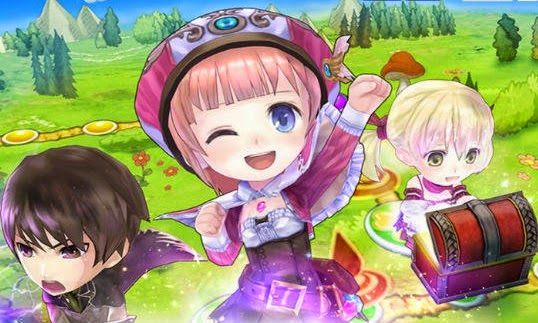 It’s not often that free-to-play mobile games are truly exciting, but over in Japan (where the market is far more receptive to them, it must be said), there are a range of mobile games that have been worth getting excited for. SEGA’s Chain Chronicle and DeNA’s Final Fantasy: Record Keeper are two examples that have made their way over with English translations, but for my mind Koei Tecmo’s actually becoming a leader in the space.

But you’d never know it, because Koei Tecmo seems to be reluctant to localise its mobile games. And that’s a pity, because we’re all missing out.

Two recent games, especially, highlight the quality that the publisher is putting into mobile games. Atelier Quest Board is a game that – you guessed it – is based on the popular Atelier franchise. Further, for the most part it’s based on the the Arland series, bringing Rorona, Totori, Meruru, and their friends together yet again. Unlike the standard Atelier JRPGs, however, this one plays out more like a board game, where you use cards to move from space to space and attack the various enemies. 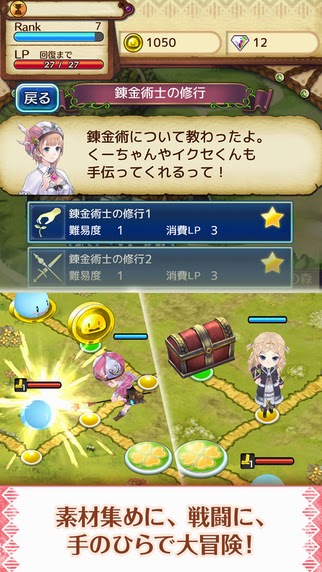 The game includes all the material gathering and alchemy systems of the console games, though it should be noted that as a mobile game these are simplified a little. What hasn’t been simplified, however, is the great sense of character development that the Atelier series has always espoused. Rorona, Totori and Meruru (and the others) are all as bright and bubbly as ever, and the various quest scenes and conversations between the characters are as irreverent and blindingly happy as ever. This is a charmingly bright little game, and very, very addictive, and indeed it stands as proof that free-to-play games can have a decent sense of narrative.

It really surprises me that a localisation hasn’t been announced for this one. Koei Tecmo is working hard at turning Atelier into a premium JRPG franchise in the west, and having a mobile game that gives players a 101 introduction to literally everything that the series is about would have made sense to me from a brand development perspective, beyond even considering the revenue that Koei Tecmo would earn from the microtransactions and the like.

The other one is even newer, and is perhaps the best free-to-play game I’ve ever experienced, even if I can’t understand everything that’s going on. Guru Guru Dansion Nobunyaga, which roughly translates to “The Round Dungeon Nobunyaga” is a Wizardry-style dungeon crawler, a little like titles such as Demon Gaze, about the Sengoku era of Japan – the same setting as the Samurai Warriors series. The difference is that all of the daimio (warlords) of the era have been replaced by cats. Nobunyaga (the cat version of Nobunaga Oda) is a fairly popular Koei Tecmo character in Japan, has been a downloadable character in Warriors games, and even made an appearance at last year’s Tokyo Game Show. 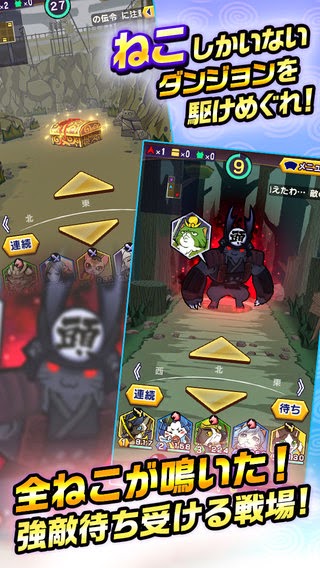 It’s easy to see why the character is so popular in Japan. While the mechanics of Guru Guru Dansion Nobunyaga are themselves great fun (making use of a slot machine-like mechanic that gives players a lot of strategic control over how their characters attack), it’s the personality of this game that is really addictive stuff. It’s got killer presentation values too, with brilliant looking dungeons and an exceptional soundtrack. It’s the kind of game I would have thought would go well in the west, but alas it may never be.

Koei Tecmo is of course not the only Japanese game developer with top-quality mobile games that I am concerned may never make it into English. Last year at Tokyo Game Show I played a killer little rhythm RPG staring Hatsune Miku herself, called MikuColle, and despite being available in Japan for some months now, there has been no announcement of an English release, as far as I’m aware. It does seem that Japanese mobile developers are hesitant in localising their games for overseas markets, perhaps out of concern that the relatively niche appeal for such games in the west, coupled with the relatively low percentage of western players that spend money on free-to-play games, might mean any localisation initiative would be wasted energy.

Still, I hope against hope for all of these games. Chain Chronicle took its sweet time to be localised too, and it was worth the wait. So let Koei Tecmo (and Crypton) know that we do want these games, and hopefully we do see them in the future.