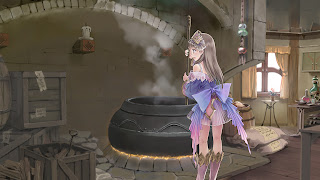 It initially struck me as a little strange that the first PlayStation Vita port of GUST’s superb Arland trilogy in the Atelier series is the second one. Atelier Rorona came first and yet Totori is what we’re now taking with us on commutes around the world.

Once I started playing the port I remembered why – as enjoyable as the original Arland game was, Rorona had some rough edges. Totori does not. Though the formula would be perfected by the third game, Meruru (also available on Vita in Japan and soon, we hope, in the US and Europe), Totori is the best one to kick the series off for newcomers – the plot leads nicely into Meruru and anyone who really gets into the game can go back to the PlayStation version of Rorona after via eBay or some such.

(Be sure to read our interview with GUST here)

What made Totori stand out compared to its predecessor? For the most part it’s in the balancing – the 3-year in-game time limit which has become a standard for the series is reasonably gentle this time around. Where Rorona had me stressed out in trying to pick my actions to conserve time, Totori felt nicely laid back. I wandered the world collecting materials, battling enemies and alchemising objects as I would with most JRPGs that are not time limited; in this game the time limits are more a consequence of the story than something designed to be part of the challenge. 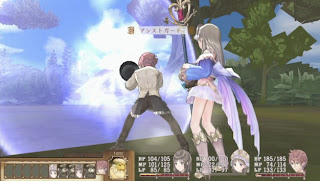 The story is also one of the stronger ones in the series. Unlike Rorona and Meruru who undertake the lives of alchemists for purely financial (Rorona wants to save her alchemy shop) and selfish (Meruru simply wants to drop her royal duties to be a full-time alchemist) reasons, Totori is questing to save her mother. While the plot doesn’t have the nuances of the newest Atelier game, Ayesha (despite sharing a similar theme) and so isn’t quite as interesting, Totori is still a compelling enough otaku-style story. While it lacks the sheer humour and pleasant charm of Meruru, it does not take itself quite as seriously as, say, Ayesha, either. So Totori sits right in the middle of the finest Otaku JRPG stories this generation. That won’t mean much to people who haven’t played many of these games, so for those people; Totori features a lot of silliness, situational comedy and a relatively simple plot. It’s fun, but not deep and meaningful. It’s also not as out-there weird as something like Hyperdimension Neptunia Victory, which makes it a near-perfect “entry drug” to Otaku JRPGs.

And as the standard warning for anyone who has not played this genre of game before – be aware that if you’re on the conservative end of the spectrum when it comes to sexuality you are going to be challenged at times in Totori. Some of the situations that are designed for humour could potentially offend such people. The Vita version of the game also comes with two downloadable costumes for Totori – a white one-piece “angel” swimsuit, and a rather skimpy black “devil” number, complete with tail. Logic tells me that these, as completely optional elements of the game, could be simply ignored by people who they are likely to offend, but we live in a world where people who like to be offended like to impose their lack of humour on other players. If a trip to your typical beach offends you, what with all those kids, teenagers and young adults running around in swimwear, then close your eyes and for the love of God don’t buy this game. We don’t want you reporting it to the censors and such, thanks. 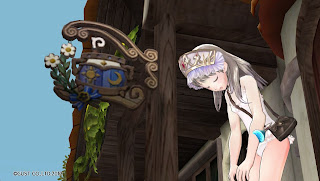 That digression aside, Totori looks wonderful on the Vita. Though the game was hardly a technical marvel on the PlayStation 3, none of the personality or bright charm has been lost on the Vita’s OLED screen. The music remains chirpy and Tecmo Koei evidently realised the mistake in removing the voice track option from Atelier Ayesha – this time around they’ve done the right thing for the fans and left the Japanese voices in.

Totori wanders around this bright and cheerful world collecting ingredients from the land and battling monsters to collect even more. This obsessive collecting serves a purpose – back in the alchemy lab Totori can merge items together to craft… well, anything, really. Potions, attack items, equipment, cakes… it’s all there. In addition to using those goods to her own benefit, Totori can sell them for cash or give them to the local guild to complete quests. Quests need to be completed by a certain time or bad things start happening, but as I mentioned earlier, the game is gentle with deadlines. More gentle than I am with the other journalists on this site, anyway. 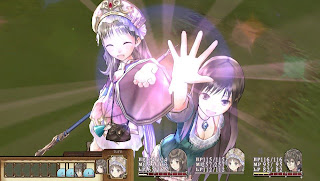 The game’s complexity starts to show its face when players get into the “traits” of objects. Each object created through alchemy can be affected in various ways by the traits of the raw ingredients. Better quality ingredients might make an object more valuable or do more damage. Poor ingredients might render an object almost useless. After a couple of hours play the system becomes comfortable enough that “bad” objects are easy to avoid, but other complexities start arising – when you merge objects with a lot of traits together you’re going to only be able to pick a few. Which traits do you keep, and which do you toss? It’s almost like deciding what moves to keep or dump from a Pokemon.

For anyone who has played Atelier Ayesha, this system was automated and it left a few long-term fans of the series cold. It means for new players that Atelier Totori is a little less accessible, but depending on whether you went into it looking for depth or charm, it could be more rewarding. 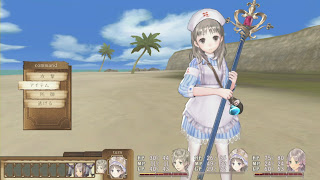 With these items, the turn-based combat that is such a standard for JRPGs becomes a lot more interesting and strategic than it has any right to be. Totori’s allies can’t use items, but they can hit fairly hard in melee, use magic abilities and most importantly act as a human shield for the relatively frail Totori. Totori meanwhile can pull out cannons (literally) and obliterate enemies with relative ease. Except that each attack item that Totori makes is literally a couple of in-game days work. Measuring whether the time investment is worth using an item in combat is an interesting dynamic that is quite unique to the Atelier world.

Also interesting is the relative lack of emphasis placed on combat in Totori. Skillful use of natural resources and the occasional investment in some material from a shop means players can get through much of Totori without putting much effort into combat. They’ll be underleveled sure, but that’s not much of a problem in pushing to finish the game. It’s only when players gun for the best endings that the really difficult battles arrive, and boy do they take some doing.

I know this score isn’t going to surprise any long-term readers of Digitally Downloaded, but I honestly find it incredibly hard to fault having Totori in my pocket. I can’t think of a console game I wanted to be portable more (well, except for Meruru).