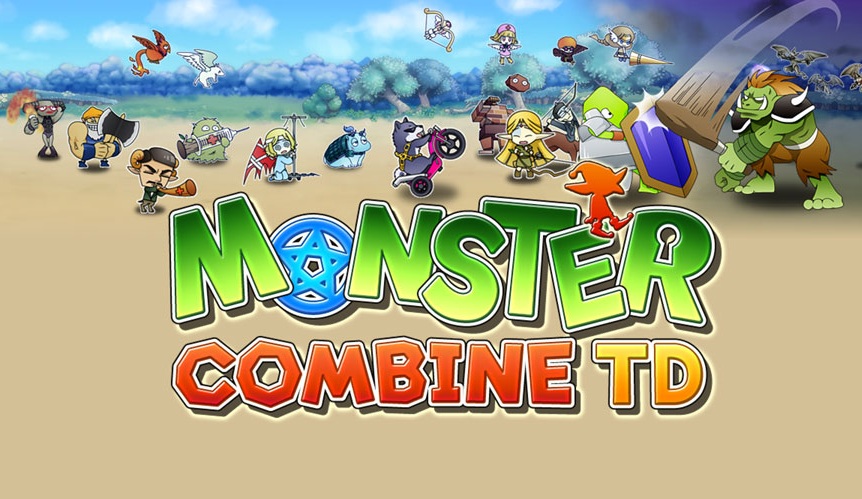 Monster Combine starts by flaunting its silliness through its story mode. The player is tasked with saving a magic school condemned to certain demise by time travelling to become a masterful monster summoner. Before long, the player has full command over an army of monsters which are then pitted against the academy’s delinquent students and various other ne’er-do-wells.

It sounds like the requisite fantasy cheese, but rest assured that the absurdity is amplified tenfold by the third act. In the meantime, the tutorial-ridden dialogue is converted to surprisingly engrossing material through a variety of player speech options. These have no real impact on how all the scripted events will play out, but playing the rebellious hero that spouts irrelevant lines is a guilty pleasure since the game actually entertains the often obscene secondary choices. One-note characters feel that much more human when they’re berating or rebuking the player. There’s a good range of gags, too, such as one that sends players back in time for trying to shirk their duties in a manner only Super Paper Mario could top. It’s easy to overlook the myriad of grammatical errors in the script when being a devious summoner is such unadulterated, nonsensical fun. 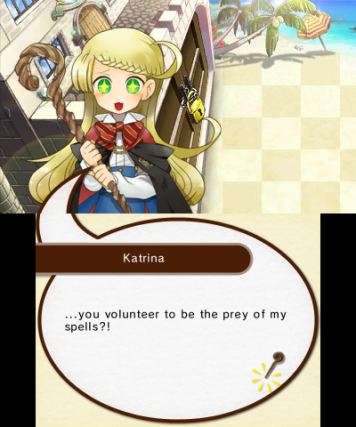 The aesthetics help give Monster Combine an extra dose of flavour in their own right. Character portraits opt for one of the more unique-looking anime styles out there and suit the game’s tone rather well. Granted, cookie-cutter monster designs that look as if a completely different artist handled them detract from this somewhat, but there’s a real charm to the simplicity whilst avoiding the dreaded Flash game look often associated with tower defence titles.
Once immersed in your role as summoner, it’s apparent that Monster Combine has more going for it than a mere Plants vs. Zombies clone. In case you’ve no experience with that one, the key takeaway is that you’re put in control of defined spaces on a rectangular grid rather than the winding pathway of Bloons and its kin. Victory is achieved here by placing monster cards onto your side of the grid and using these summoned creatures to thwart the foe’s battalion.
Believe it or not, Monster Combine evokes the vibe of a casual, real-time Monster Monpiece more than anything else to me because, as the game’s title implies, combining monsters is a crucial tactic; you’ll be repeating it multiple times just about every single bout. As such, the player must constantly weigh the value of a clever monster merger versus more raw firepower in the form of many weaker foes. There’s also some overarching micromanagement thanks to customisable decks and experience points, but it’s disappointing that these factors are so underutilised as it means the game never truly hits its strategic potential. That said, the experience is still full of minor wrinkles like super attacks to keep the game’s 40+ bouts amusing. 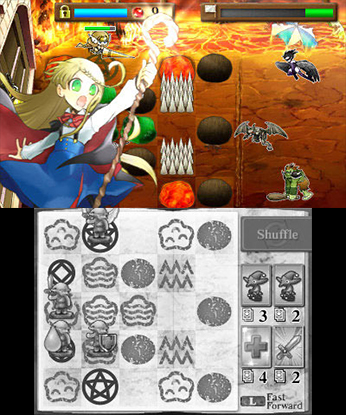 What doesn’tcontribute to the lasting value, however, is Monster Combine’s battle pace. Every unit moves at a downright sluggish rate, so determining when to actually place a monster is done far in advance. Since you’ll no doubt keep that speed up button firmly pressed, though, there’s a good chance you’ll overshoot and miss your window for a counterattack because watching zombie-like movement isn’t all that captivating. It becomes simpler to gauge opportunity windows over time but needless to say, patience is a must with this one.

Related reading: For folk with Android devices or iPads, it’s hard to look past Chain Chronicle to scratch the tower defence itch.

Monster Combine TD isn’t totally polished or totally original but it bears the markings of an eShop sleeper hit. If you’re in the mood for portable tower defence action with a comedic twist, Collavier has you covered.