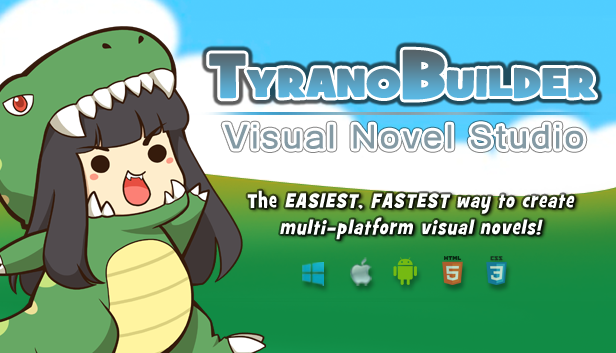 Earlier this week we reviewed TyranoBuilder, a great bit of software brought to us by Nyu Media that allows people to create their own visual novels.

That being said, it is a reasonably limited piece of software in some areas at the moment, such as the lack of existing art assets, meaning that you’ll need to create them all by yourself. But that won’t last long. According to the Managing Director of Nyu Media, Seon King, TyranoBuilder is going to get bigger and better yet.

Related reading: An earlier interview that we did with King, back in 2012.

We sat down to have a brief chat with King about his plans for the software, and Nyu Media in general. It’s especially interesting to see where he sees this software fitting in with the other visual novel software packages out there.

Digitally Downloaded (DD): Now that TyranoBuilder has been released, what opportunities do you see to expand on it further?
Seon King (SK): Our plan from the beginning was always to frequently update and expand and improve TyranoBuilder. We actually have a major update planned for the week of April 20th which will include support for Live2D, as well as many other improvements and tweaks, including some that have been provided from Steam users via the TyranoBuilder Steam discussion group. This will be the first of many updates as we continually improve and develop TyranoBuilder.

DD: How do you see this software competing with the likes of Twine and Ren’Py in the longer term, given that they are all similarly focused on visual novels?
SK: Both are great tools, but Ren’Py is targeted towards programmers, and Twine has a much lower feature set compared to Ren’Py and TyranoBuilder. Conversely, TyranoBuilder caters towards all types of visual novel creators, from beginners to experts, and offers a wide range of features and pretty much unlimited flexibility when you factor in scripting. In conjunction with the new features and new modes we have planned, we expect TyranoBuilder to be a strong alternative to both of these well-established engines moving forward.

DD: How far do you think people will be able to push this software? We’ve seen that many commercial visual novels are including other gameplay elements such as RPG systems and the like. Will TyranoBuilder games have similar systems in place?
SK: While providing support for mini-games and RPG specific systems probably won’t be a focus for TyranoBuilder moving forward, TyranoBuilder is extremely flexible and powerful thanks to the included TyranoScript and JavaScript, which it fully supports. Both of these allow anyone with programming experience to create pretty much anything that they would like within the games they create with TyranoBuilder.

DD: Nyu Media publishes a lot of independent games. Do you see yourselves commercialising some TyranoBuilder games in the future?
SK: It’s a possibility, but not really. There is absolutely no reason why anyone who creates a game with TyranoBuilder wouldn’t be able to publish directly to Steam or the App Store or wherever themselves. There’s no necessity or extra value to be by having a publisher involved.

DD: What are your favourite TyranoBuilder games so far?
SK: TyranoBuilder has only just been released and we haven’t seen many English language games, so there aren’t many examples I can point right now, but I’m very excited for what we will see in the very near future. In the meantime, I’m excited for Afterschool Quest 2, which is one of the first games to make use of TyranoScript and Live2D.

Related reading: For an example of how good visual novels can be, check out our review of Hakuōki: Stories of the Shinsengumi.

DD: Finally, more broadly, what are some of Nyu Media’s goals for the next year or so?
SK: Later this month we’ll release Supercharged Robot Vulkaiser, but otherwise our focus for now is on providing as much support as possible for TyranoBuilder and Yatagarasu Attack on Cataclysm. After that, we will probably release two more Astro Port games, but as of now that’s pretty all the products I can speak to for now.

LEGO Dimensions is going to be brutal on the wallet