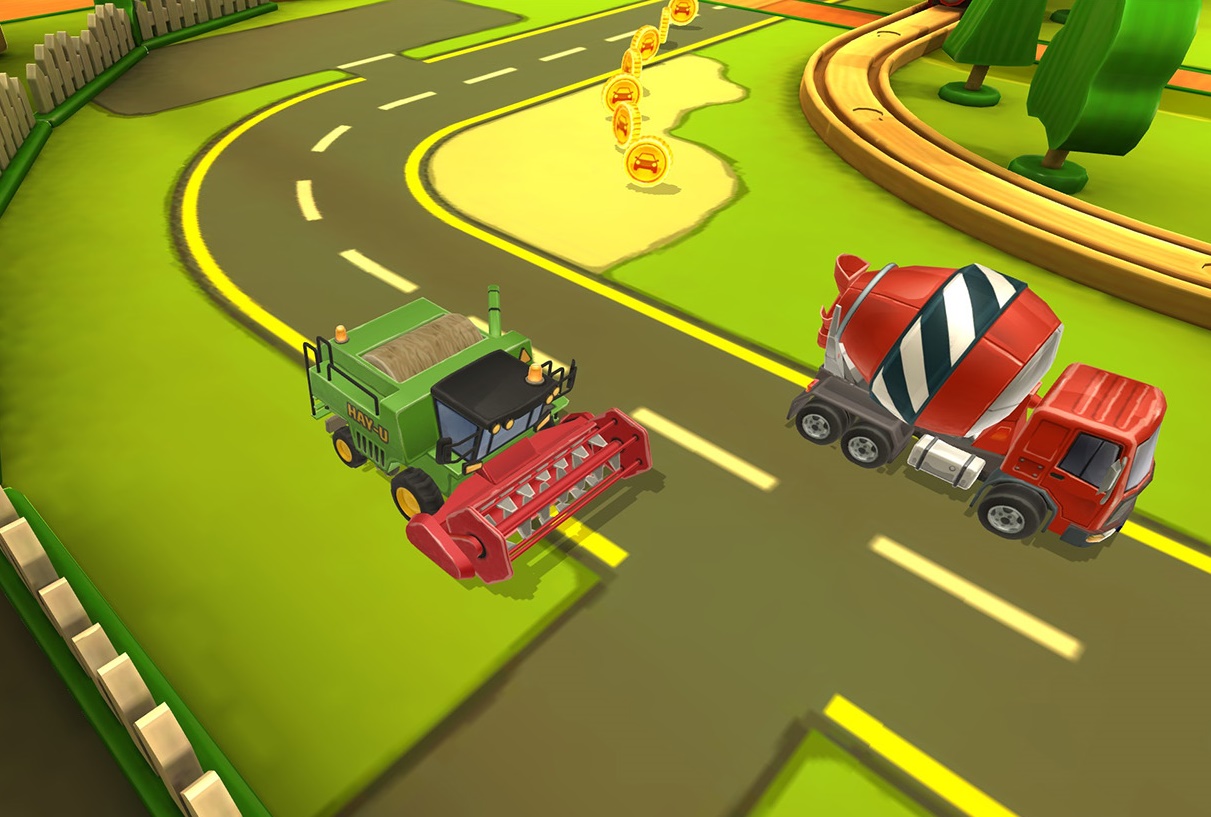 When I think of Codemasters I think of great simulation racing games such as the GRID and F1 franchises, so it came as a bit of a surprise that the publisher would take on a game like Toybox Turbos. I’m rather glad that it did, because its actually a lot of fun.

The single player races are set up as cups. Each cup has its own specific class of vehicles that range from public transport to farm equipment. There are seven cups which consist of five events and a boss fight (more on that in a moment). Every event also offers up the standard modes for racing games like the classic race and time trials. In addition, there are more specialised races such as; overtake (where you try to overtake as many cars as you can in three laps), and escape (where you must outrun an advancing blue screen for as long as you can). Getting first place in any event will give you stars – three for first place, two stars for second and one for third. The stars don’t do much more than give you a target to achieve, but you will also earn coins within the races to purchase new cars with. Each cup has a range of new cars you have to buy so racking up coins is the main feature of the gameplay loop. 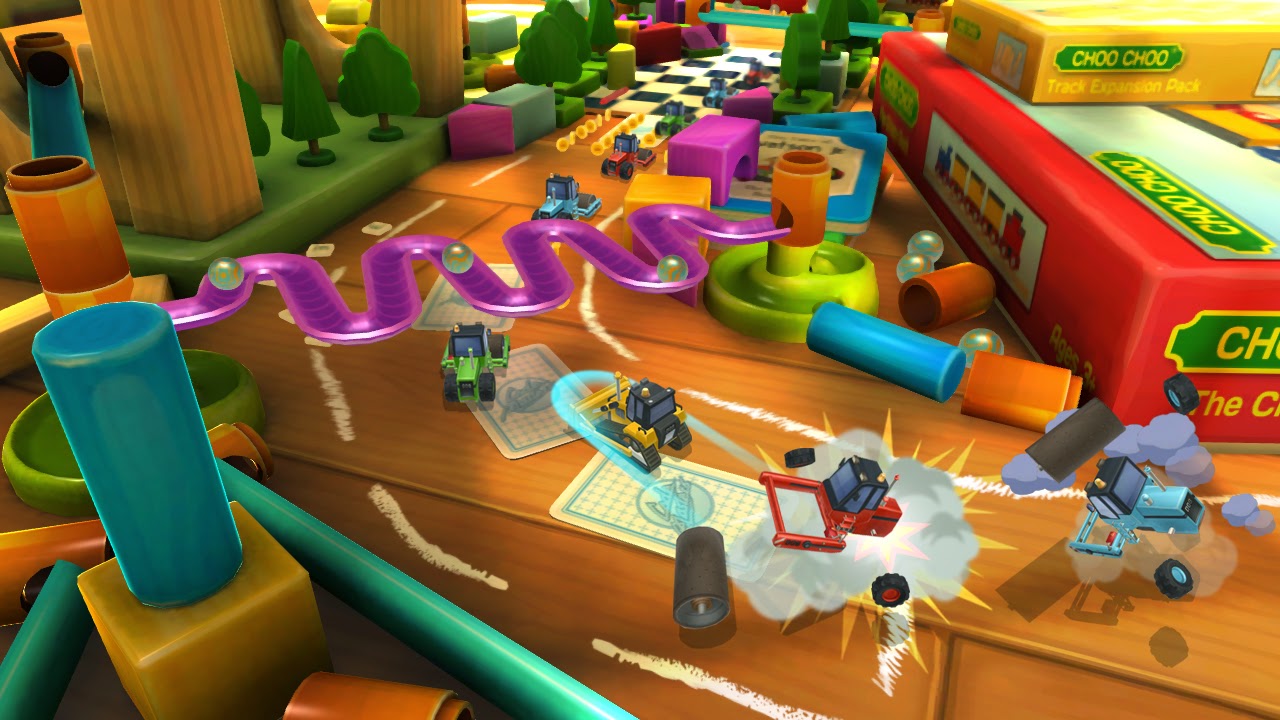 At the end of each cup, you’ll be faced with a finale event – the elimination. Elimination events act as boss battles where you must race a bigger and better car than your own and you must outrun or take them out by using a power up. If you are victorious, you earn a point and they lose a point. The first player to get a full bar of points wins. Power ups are strewn throughout each track in the form of presents tied up with bows. But don’t get this confused with Mario Kart, as there are only a couple of these power ups, such as the hammer that takes out cars in front of you, a machine gun, and mine layer that can slow down other racers behind you. After beating a boss you can use that car in races. But sadly the value of the new car is limited, since you can use the vehicles only in the cup you earn them in and not take them into a new cup.

There are 18 tracks which seem a little small in scale, but they have in-game assists and shortcuts making them much more enjoyable to explore and master. The tracks in each cup vary in theme similar to the vehicles. Because it’s all about toy racers, you’ll be navigating through domestic environments that appear larger than life. So for instance you could be speeding your toy car around a work site or doing laps around the messiest kitchen in the world. Be wary of spilt milk and burnt sausages as you swerve around kitchenware and counter top accessories. All of the vehicles perform differently depending on their speed, handling and weight. You can customise your vehicles but it’s limited to paint only. Surprisingly, using the keyboard controls to race are easy and accurate, but I would still recommend plugging in a Xbox 360 controller if you have one. 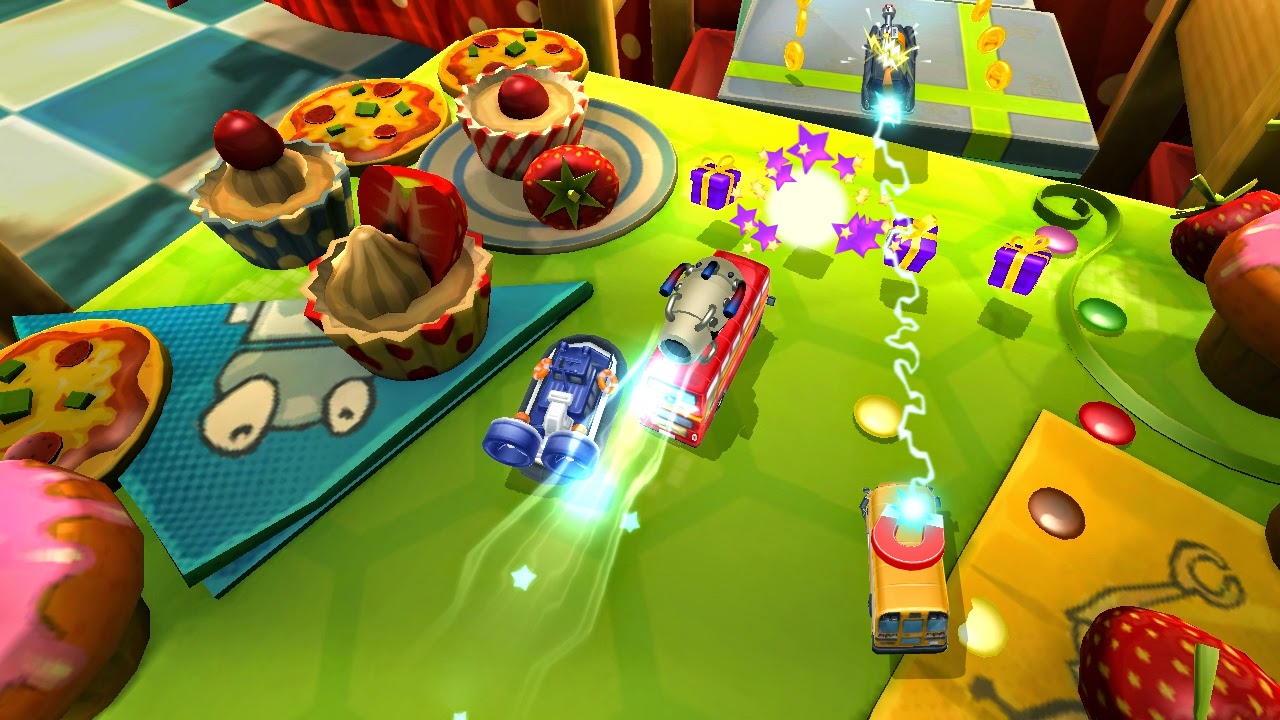 The visuals are bright, colourful, and playful and the 3D offers a rich field of depth. The music is okay for this type of game but could use some different tunes now and then and I would have thought that more upbeat tunes would have been more appropriate for this kind of game.

Toybox Turbos is a good game for beginners and newcomers to racing games. It presents an easy learning curve, but later levels can be a little more challenging. It’s a lot of fun to play and in ways it may remind players of the Micro Machines toys and video games from the past.