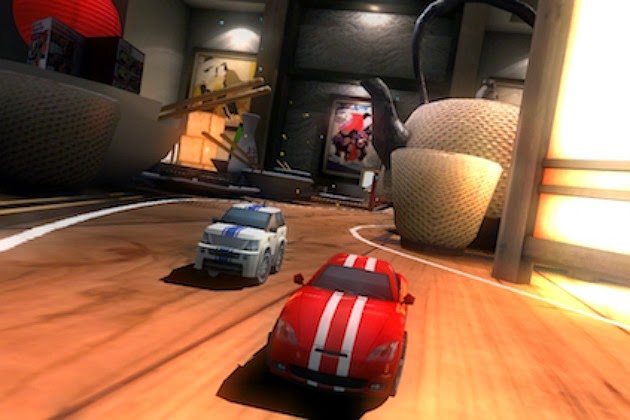 Ripstone is a publisher that knows a good casual game when it sees one. From Pure Chess to Men’s Room Mayhem, the publisher has again and again picked up simple, entertaining games and brought them to the PlayStation Vita without excessive fanfare. But they’ve always been genuine fun games.

Table Top Racing is no different.

The base game plays out like a mix between the classic casual racing games, Micro Machines and Mario Kart. By default the camera is positioned behind the player’s little toy car (though it’s also possible to play from a top-down perspective), as it zooms around tracks with rubber ducks, cooking utensils and BBQs as obstacles. There’s a handful of weapons to pick up and fire that are scattered through each track – nothing as fun as shells or banana peels, of course, but the generic missiles, bombs and speed boosts do their job to introduce some mayhem into the experience. 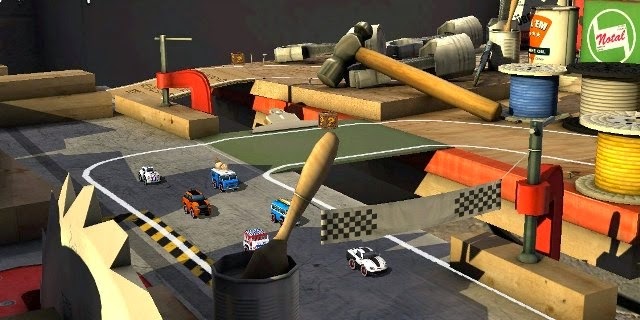 The game is split up into levels in which players will be able to earn between one and three stars based on how well they perform. One level might be a time trial, another level might be a standard race against five other racers, and a third level might require players to catch an opponent’s car in a quick time. Across the half dozen or so different level types there’s enough variety to maintain a player’s interest, and because each level is over in a minute or two at most it’s easy to get into a groove in which you’ll fly through the levels, having a great time while not being especially challenged.

Performing well nets a lot of in-game coins which can be used to upgrade cars. Once you’ve got a fully upgraded fast car there’s very little challenge left in the game and very little reason to race with any other car, but the visual range of cars is fun and I do think a good number of players will want to upgrade, say, the Ice Cream truck to the maximum. Not because it’s an especially useful car, mind you, but because it’s fun to use anyway. The game provides more than enough cash simply through racing, but for impatient players it’s also possible to drop a few more dollars of real money to buy a big bag of additional coins. 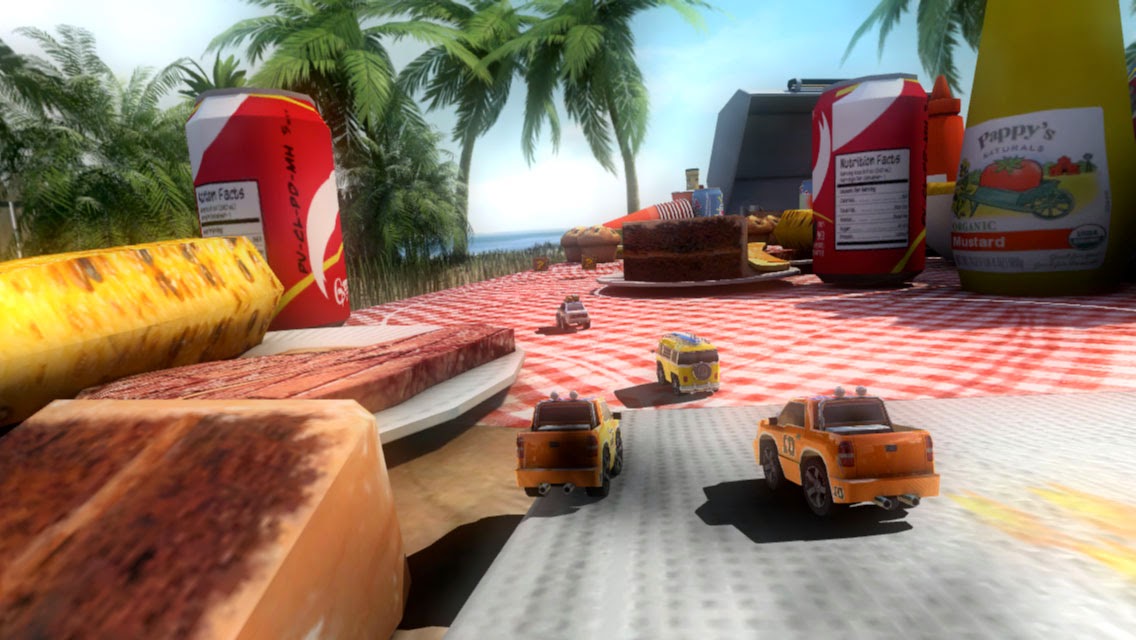 Aside from the single player levels, there’s online and local play. I wasn’t able to get an online game going – I suspect the community was dead before it was started, but I did play a couple of local multiplayer games and it goes without saying that it is a heck of a lot of fun with human players. This is true of all party racer games, but Table Top Racing suffers from poor AI to a greater extent than many of its peers, and so people who are looking to purchase this game should make sure they have some capacity to play in multiplayer.

I’ve also got a couple of issues with the physics engine of the game. Fast cars are too twitchy and the sliding mechanics are off, meaning I needed to restart a race more than a few times thanks after putting slightly too much pressure on the imprecise Vita analogue sticks during a turn. Further, while I’m on board with silly collision mechanics in a game like this, there were times when collisions would behave in an inconsistent fashion, and this is a problem. If it’s impossible to predict how a car will behave when it hits an object in the scenery, or another car, it’s very easy for frustration to set in when surviving a crash starts to feel like a lucky draw, rather than something that good racing can account for. 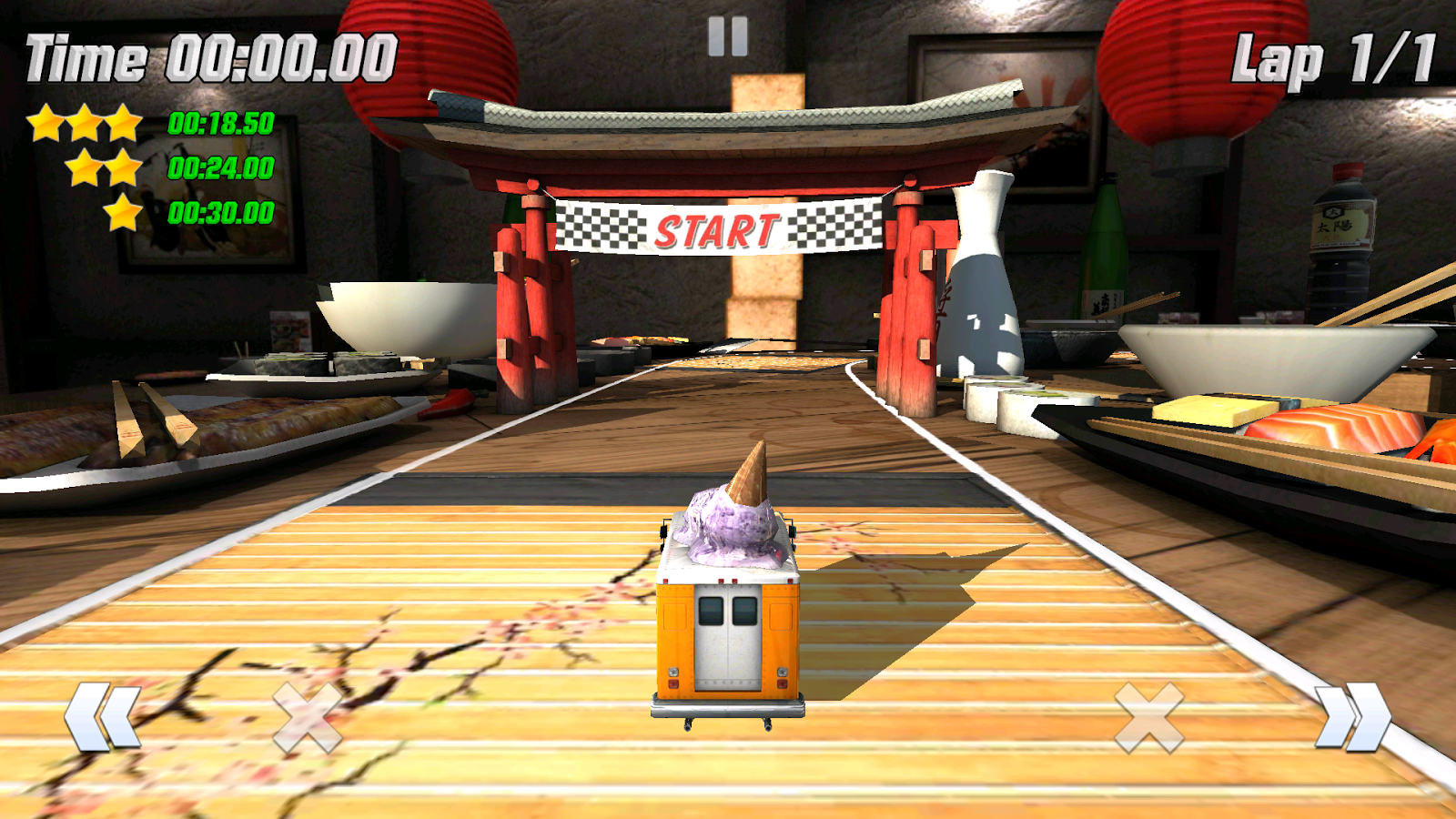 The rear touch screen also activates the mirror view on the car, and with my big hands I can assure you that more than a few times I accidently sent myself off the room by flicking on mirror view right before a critical corner.

Table Top Racing’s small issues are not enough to ruin what is essentially an easy, casual party racing game, but they’re enough to ensure that it’s never going to be remembered as a classic. Then again, it’s being sold for a couple of dollars, so you can’t really lose either.

What is the point of timed exclusives?