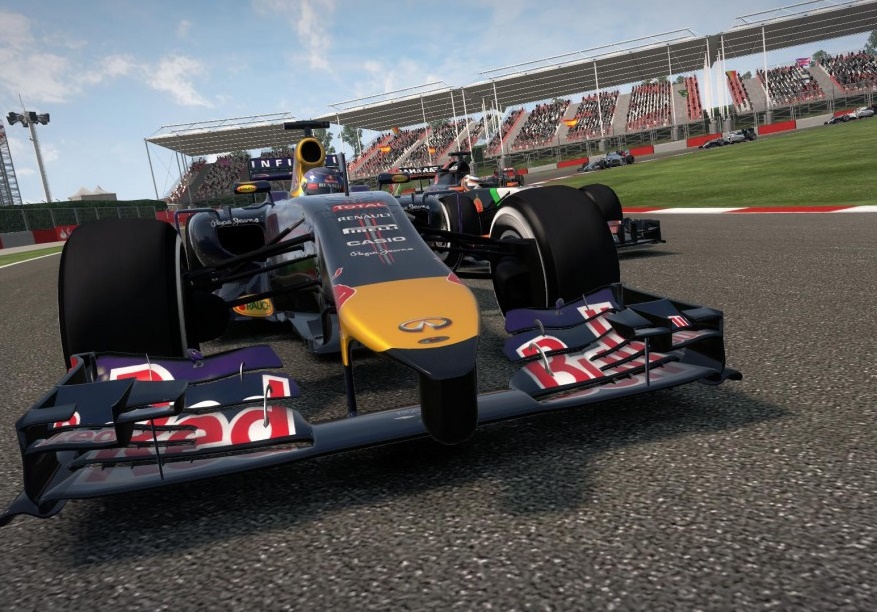 I was absolutely mystified that F1 2014 was exclusive to last generation consoles and PC. Surely, with all developers now effectively moving their franchises to the next gen consoles, Codemasters needed to at least release a “HD” version of the game on the PS4 and Xbox One.

Then I played F1 2014, and I realised what was going on. Codemasters needed to maintain its license with F1, so it released the game. But it wanted as little attention as possible put on it, because the team is actually busy with the engine that will run F1 2015, which will be released on next generation hardware and will be truly the game that F1 fans want.

This game is the very definition of what people talk about when they complain that a game has had a “soulless roster update.” Yes, F1 2014 does reflect the current set of racers and manufacturers, and more importantly it includes the new tracks, such as Sochi. And this alone means that the game has a load of content in it – there are, after all, 19 tracks in the 2014 season, and that’s more tracks than most racing games enjoy. 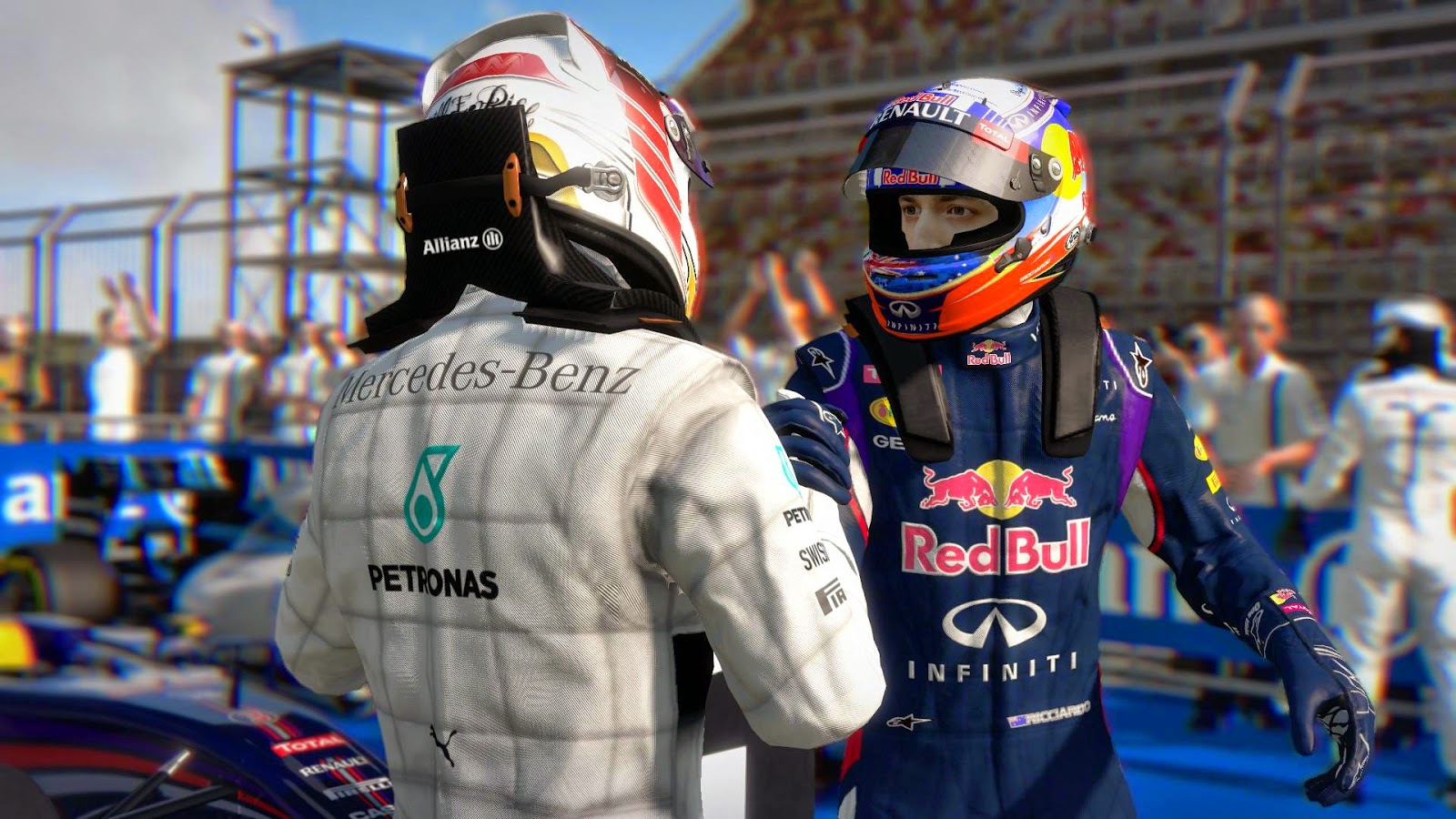 Codemaster’s sheer expertise in racing games can almost be taken for granted now, but it’s worth mentioning here. The cars in F1 2014 handle beautifully, and there is nothing quite like taking a sharp turn in one of these speed machines. I’m not the greatest fan of racing games personally (though I certainly appreciate the best of them), but I do like F1, because there’s an intensity to the speed and courses that is quite unlike other street or stock car racing games out there. There’s something beautiful and elegant about weaving through the ranks and perfectly timing an overtake in F1 which is difficult to describe, but is something unique about the sport when compared to other forms of racing.

And so, on the higher difficultly levels, when the .001 of a second can make all the difference, F1 2014 is a brilliant, intense, and precise experience. It requires skill to be good at this kind of razor-precise racing, and the authentic designs of the tracks means that no two tracks quite play the same. Some have long straights, requiring players be comfortable with a car that prioritises fast acceleration and top speeds. Other tracks take place on the road (and even at night), which is a different skill, and then there is of course the Monaco Grand Prix, which is surely the most technical racing track anywhere in the world.

But the problem for F1 2014 isn’t the way it plays or the authenticity. It’s the cheapness of the overall package. The vintage racing, which was such an awesome addition to last year’s iteration of the franchise, is gone. In fact, the actual play modes in F1 2014 are quite thin – there’s the career and season modes and… that’s it. As nicely as that package is presented, and as lengthy as those modes are, it’s hard to look at it, compare it to other racers, and not be disappointed. Especially when the vintage racing mode was already a proven success. 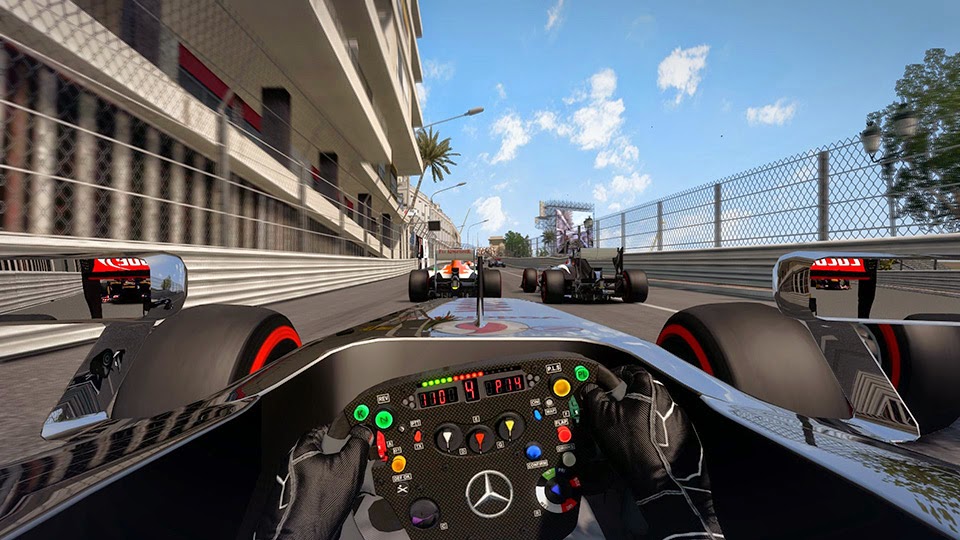 The presentation of the game suffers too. Menus are gorgeous enough, but on the track, where it counts, F1 looks every bit the last-gen game. Environments are bland and unexciting, and while the tracks are accurately recreated, it’s hard to get excited when you realise that the tracks are surrounded by cardboard cutouts. The corners cut on the presentation are most evident in the night racing, when the lighting effects of next-generation racing games leave it for dust.

Sadly, there’s not a whole lot more to say about the game. As someone who is a big fan of F1, I am disappointed that the sport isn’t done more justice. F1 2014 could have continued Codemasters’ path of taking the franchise into the big leagues of racing games, but instead we’re left with a Don Bradman Cricket-style replication of the sport. It does just enough to give fans of the sport an excuse to break the wallet out, but fails to offer anything of note to bring in new fans.

I just hope that F1 2015 has an engine for the new generation of consoles and puts the series back on track.

Review: The Evil Within (Sony PlayStation 4)