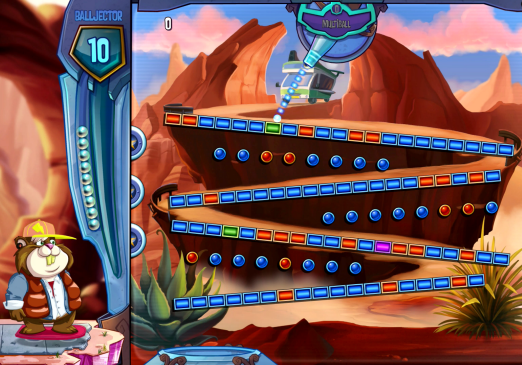 Peggle 2 has seen the introduction of another character to its zany roster of Masters, or in this case it might be considered more of a reintroduction as Jimmy Lightning from the original Peggle is back.

By now it is no secret that I am a big fan of Peggle 2. I loved it when I reviewed it for the Xbox One, and later found the the Windy the Fairy DLC to be a welcome addition as well. These DLC packs are addressing one of my early complaints about Peggle 2. I did not have many of them, but a sticking point was that the roster was lighter than I would have liked, with fewer of these Masters characters and their unique special abilities to use than we were given in the original game.

If Windy the Fairy and Jimmy Lightning are any indicators, PopCap Games is on to a good thing with this DLC strategy. Ringing in at a couple of bucks each, you get 10 new levels, 10 new trials, 30 new objectives (three per level), 3 unlockable costumes and 3 new achievements. These are nice enough in itself, but for me it is really all about the new character. I love seeing the expressive characters showing off to the lower left on the screen, and Jimmy Lightning is certainly no different on that front.

This fun little beaver brings a new range of antics to the table, as one would expect from the Peggle Master characters. More importantly, Jimmy brings a new ability to Peggle 2; his multiball will be familiar to those who played the first game, though here in Peggle 2 the ability seems to be even more effective. Shoot a ball and hit a green peg, and Jimmy’s ability will split that single Peggle ball into three different balls. Should they strike the second green peg you suddenly have six in play. This new skill made an impression on me right away; as some good luck on the first level had me catching four of these balls while earning a ridiculous number of points in the process. I think I may have a new favourite character.

One thing I enjoyed about the level design of the new stages in this DLC was the frequent use of high powered bumpers that shot the balls well across the screen on impact. During the shots where a multiball or three was in play, it was a lot of fun seeing all of these shots ricocheting around the screen. One other small cosmetic change gets introduced as the usual sound effects for hitting pegs was replaced with what I can only describe as a ‘wub wub’ sound.

Still, in the end, I found the Windy the Fairy DLC offered more. Her power was at least all new, as was her character design, where as Jimmy Lighting has a “been there and done that” feel to him. If you are a fan of Peggle 2, the couple of bucks you would be putting down on this DLC is probably well worth it, but I cannot help but get the feeling than PopCap’s efforts would have been better served in creating an original news character.