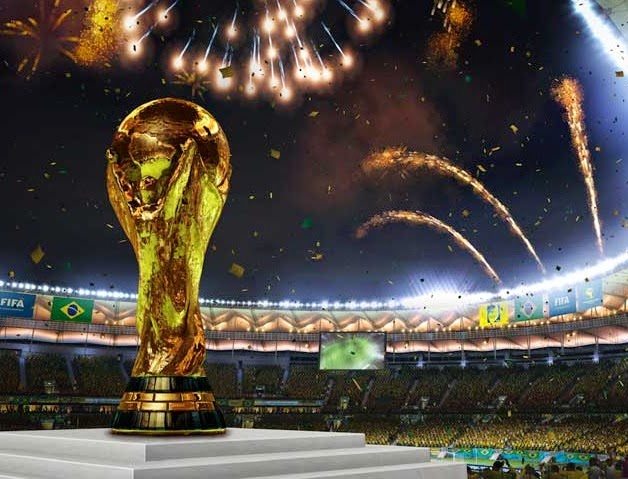 The excitement is in the air, as soccer (or football, depending on where you live) fans around the world eagerly await the World Cup kick-off in June. To capitalise on the hype, EA Sports has done the inevitable and released 2014 FIFA World Cup Brazil. Given how good FIFA 14 was, the big question is whether this World Cup title has what it takes as a standalone game… or should fans simply wait for FIFA 15 to drop on store shelves later this year?

Even from the game’s title screen, 2014 FIFA World Cup Brazil is simply bathed in the kind of fresh, colourful aesthetic that you would expect people to think about when they hear the word “Brazil”. Yellow and orange warmly dominates everything in the interface; from the lights on the field to the menu screens, and the soundtrack moves from Pitbull’s thumbing beats to the drumming native Portuguese tracks from the Cup’s home country. Combined with the little nuances like the thundering drums and chants of the crowds during a heated match, these combined bits of flare do a fantastic job of immersing players in the World Cup spirit.

On the pitch, the improvements over FIFA 14 are quickly evident. The passing game has been needfully sharpened, even if it still isn’t as silky smooth as what’s found in Konami’s Pro Evolution Soccer 2014. Headers are now more accessible to defensive players, which is a great thing when protecting inside the penalty box. This is especially true when playing against an online opponent who is taking advantage of the new set piece tactics, allowing teammates to rush the near and far post, edge of the box or to crowd the keeper when executing a corner kick. Teammate AI is more aggressive and dynamic than ever before on these set pieces, and no longer does a conceded corner kick feel like a near automatic goal when playing online. 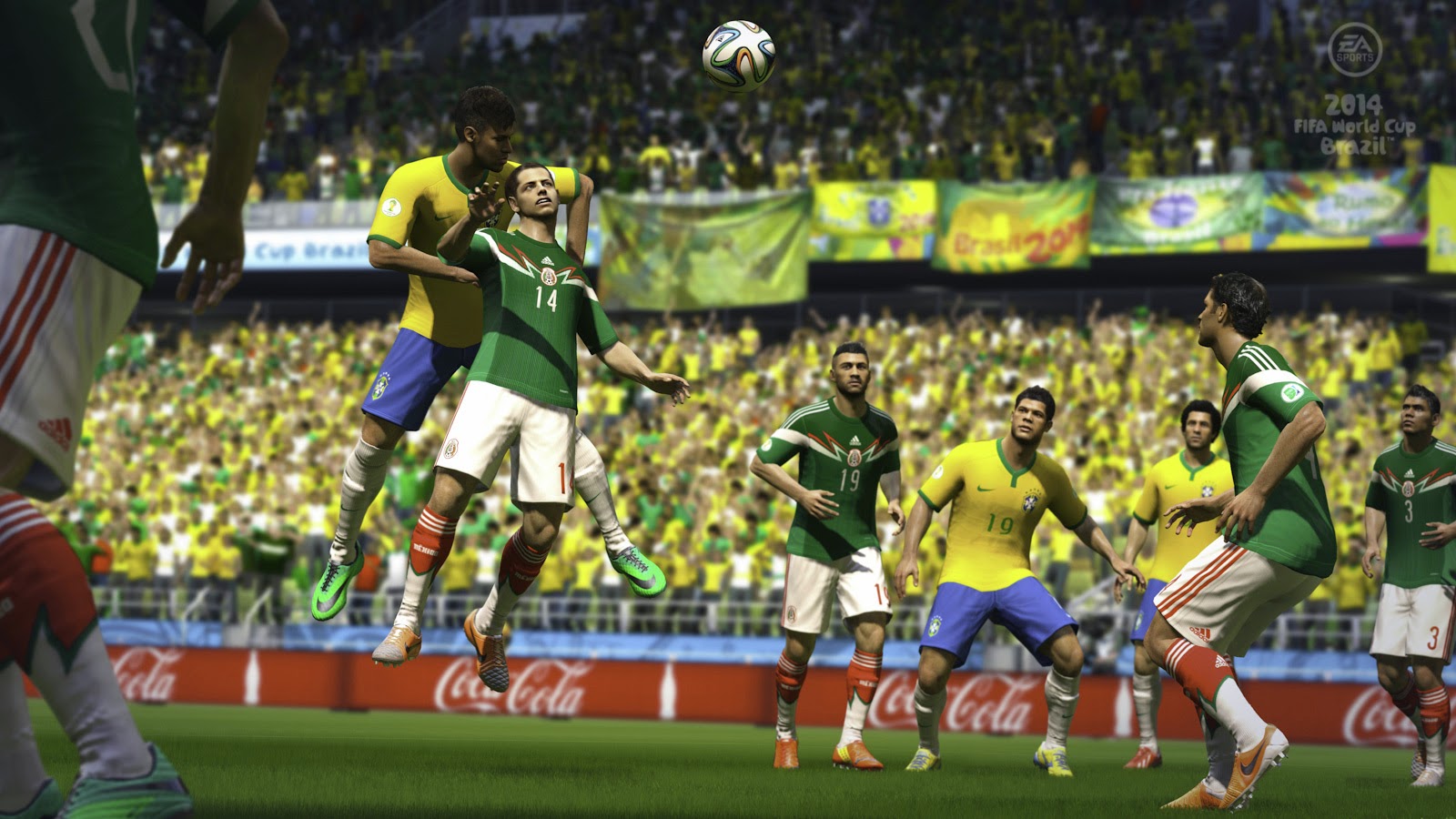 Improvements in both player movements and ball physics are minor, but the tweaks are felt on the field. The combined effects of a new ball physics engine with what EA is calling its “Explosive Movement” feature, allows the ability to control the ball with speed and precision to use ball skills to clear room for play creation. Players accelerate noticeably faster than in FIFA 14, and the ability to stop and control the ball on a dime is a great new addition that allows for truly awesome goals to be conceived and then executed.

Fans of FIFA Ultimate Team and the Seasons modes found in the yearly FIFA releases could understandably be a bit disappointed that the depth and complexity of these modes is not to be found in World Cup Brazil. Instead, the focus here is right where it should be: the World Cup. Road to the FIFA World Cup allows you to take one of the 203 sanctioned National Teams through the group qualifying stages up to the tournament itself. While there isn’t the ability to recruit players through scouting as this game isn’t about club matches, the ability to build the stats of lesser players through time on the pitch and training sessions prior to each match played still allows for that touch of management for the players that enjoy that side of things. Captain Your Country mode, meanwhile, allows for a more personal experience as you attempt to take your preferred team to the prestigious World Cup event. As to be expected, you can also take to the online modes for the ultimate virtual World Cup experience and take on other human players, if you have the necessary skills to do so. 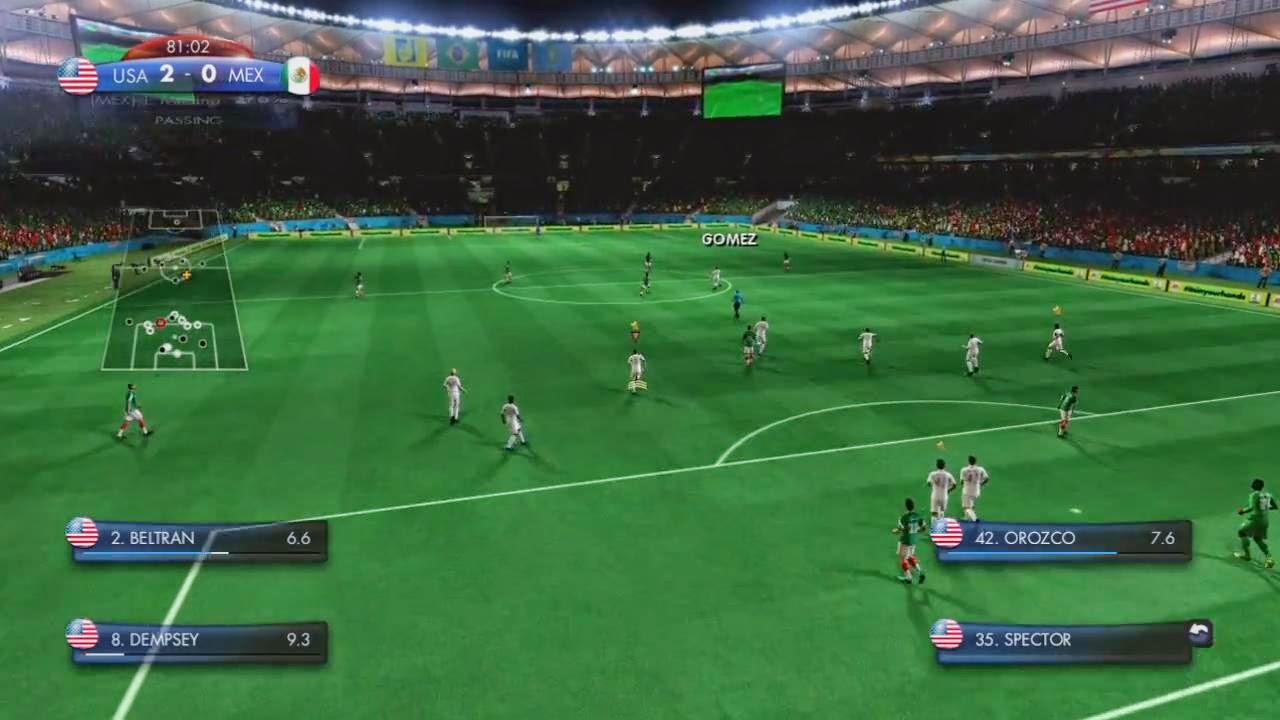 FIFA 14 slammed its presentation right into the back of the net and World Cup Brazil follows suit. While the mass crowds still look rubbish, new Live Events scenarios depict fans in popular areas of their country celebrating big goals – a fantastic touch that’s taps into the patriotism of international soccer perfectly – as well as the inclusion of banners and flags of the teams being added into the crowds. FIFA’s commentators are already excellent, but the addition of EA Sports Talk Radio allows players to hear tournament updates from either Andy Goldstein and Ian Darke, or Michael Davies and Roger Bennett as you progress through the offline modes. With over 50 hours of recordings available, you’ll quickly forget that you’re not listening to an actual live stream, bringing the World Cup experience to life better than ever before.

2014 FIFA World Cup Brazil doesn’t necessarily reinvent the wheel. It does, however, bring new refinements on the pitch from the already excellent FIFA 14, and layers on a Brazilian vibe and mode structure that’s unique from the yearly FIFA releases. While many will likely opt to hold out for FIFA 15 later this year, those looking to get into the virtual World Cup spirit this year will be glad that they did pick this one up.