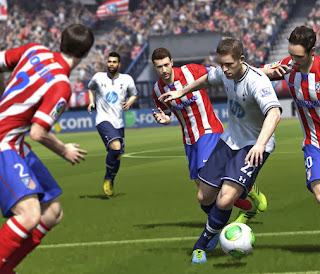 If you’re a soccer (football, futbol, etc etc) fan like I am, then this is a great time of year. For whatever reason, both EA and Konami release their respective instalments into their soccer franchises right next to one another, and as these two are the only soccer games worth playing it means the fans are really spoiled for choice.

Both FIFA and PES are genuinely different games with different “feels” and quirks, and rather than review them individually I thought a side-by-side comparative review of both together would be a more interesting way to do things.

FIFA is all about options. It has a major advantage over PES in terms of the number of different ways to play the game, as well as the number of teams on offer. From the Aussie A-League (though lord knows why you’d care about this one), to the Saudi Arabian league, the Argentinian league and the various European leagues there is something that should appeal to every soccer fan. Slightly disappointing is the lack of Asian leagues (especially the very wealthy Chinese and Japanese leagues), but that’s picking for the sake of it.

Once you’ve picked your favourite team you’ll have a wealth of both online and offline modes to play though. Manager, Tournament and Ultimate Team coupled with constantly updated real-world matches and statistics provides players with a wealth of content – so much in fact that it would be impossible to experience it all. Teams statistics are updated week-by-week to take into account form which enhances realism greatly. Thanks to EA’s Cloud servers I’m having a tough time with Crystal Palace right now. This impresses me even if I’m not overly amused by it.

By contrast, PES opens up with some classical music and an elegant, if limited interface for the menu. Playing both games side-by-side makes PES feel a little limited, enough so that at first it feels like it’s a little cynical that Konami is charging the same price for the game as EA for FIFA.

This limitation is most keenly felt in the favourite team selection process. While the European teams are covered the “lesser” leagues that EA has done such a great job in including aren’t in here. The only way to play an Australian team, for instance, is via the Asian Champions League as the A-League isn’t in there. Though ironically this means there are more Japanese teams than we find in FIFA.

PES is also less interested in throwing reams of data at players. It feels less connected into the real world of soccer and so feels less authentic. Most of what EA offers is actually available in some form in PES, but it tends to be buried in the obscure menu structure rather than bombastically hurled in your face as FIFA does. I guess that’s the price of elegance.

On the field though it is so very evident that the developers of both FIFA and PES had very different ideas on how a game of soccer should look, and I prefer Konami’s belief that soccer is an elegant, graceful sport. Where FIFA is all about making the big plays and individual player skill, PES shines when players adopt a clever passing game and set up a precise through ball or cross. It’s harder to master PES. In fact, trying to play PES like a FIFA game will result in a loss even on the lower difficulty levels. Playing a passing game on FIFA is possible, but feels quite clunky by comparison.

What I have found most interesting about the games is the way that their different focuses affected the way I liked to play each game. With FIFA I stuck with the standard side-on and zoomed out camera that gave me a good look at everything going on around me. With PES I enjoyed the behind-the-back close-in player camera. Why? Because the more dynamic passing game, coupled with the vastly better visual engine made for a more cinematic experience, and I wanted to be on the ground rather than an armchair tactician.

On the other hand, PES is still susceptible to some odd physics and AI routines. There were the odd moment where all of my players would be standing around a free ball doing nothing, and there were some jerky animations when two players were fighting over a ball. Nothing game breaking, but FIFA’s superb AI routines and physics engine is an investment that has paid EA clear dividends.

These are both very fine games in their own right, and both will appeal to soccer fans for their own reasons. To boil it all down to a single catch-phrase however, FIFA has the better off-field content, and PES has the richer on-field experience. If you’re only going to get one, keep that in mind when deciding which.

Interview: The man that made a game about suicide