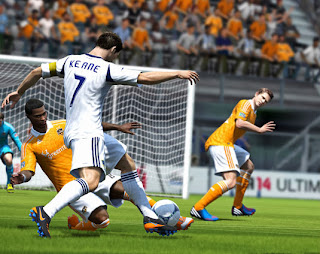 Say what you want about EA, it makes great games. There’s just no other way to put it. NHL 14 and Tiger Woods PGA Tour 14 both excelled over previous entries, but now that FIFA 14 has run onto the field, all of those fingers that got pointed at EA for being the worst company in the world earlier this year (and the year before), well, if you’re one of the finger pointers, you can point that finger right back at yourself, because you’re pretty silly.

After having the opportunity to watch Real Madrid take to the field in St. Louis a few months back, I think it’s understandable why I’ve been amped up to get my hands on this year’s FIFA title. It doesn’t disappoint either. This year’s FIFA doesn’t feature any ground-breaking new features or gameplay modes; instead, EA Canada has opted to refine, retune and further improve on all of the recent features that have made the series such a joy to play. The end result is a virtual game of soccer that actually feels like a game of soccer.

Just like how NHL 14 added more realistic skating and puck reactions, FIFA 14 does much of the same with player movements and their interactions with the ball. Precision Movements bring momentum physics into the game, giving the players more agility and range of moments. This allows the players to move in a realistic manner, much like the level of expertise I witnessed first-hand watching Real Madrid play. Planting a foot for a 180 degree turn to throw off a defender on the attack and you’ll actually see and feel your player’s weight stop, shift and gain momentum in the opposite direction. At first, it takes some getting used to, but it quickly becomes the highlight of this year’s title. 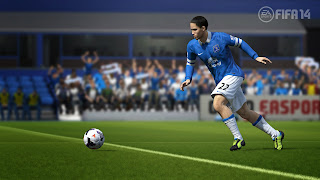 These physics play into the way that you interact with the ball as well, and you’ll see this in near every aspect of the game. Try to make a wild shot on the goal while you’re in the middle of shifting your player’s weight and the ball’s trajectory will be negatively affected for it, just as it would in real life.

Learning to use these new physics to your advantage though, that’s where the fun begins. For me, I slowed down the way that I play the game. I now build up my attacks in a slower, yet more deliberate approach, before (hopefully) unleashing a highlight reel worthy series of moves to put the ball past the goaltender. It truly feels like a more realistic game of soccer when playing the game offline and when a planned attack finds the net, it’s all the more satisfying for it.

In our comparison review between FIFA 14 and PES 14, we noted that where this title misses the mark this year is in its passing. It’s the one area that does indeed come up short against PES’ butter-smooth passing game. What’s here isn’t horrible, by any means, but too many times I found my attacks being thwarted by my passes going to the wrong teammate – usually creating an automatic interception. This found me using the L2 button quite often, which protects the ball with some expert footwork while in close quarters, to get down and dirty with the defenders on the attack, instead of trying to make big passes all the time.

Playing defence has never felt so good in a FIFA title as it now does though with the players now featuring momentum physics. Containing an attacker on the rush and timing your tackle perfectly isn’t just a vital part of the gameplay, it’s quite entertaining to witness, as the players’ opposing momentum finds their legs tangling together, tripping and/or falling onto each other at times. Also, the impact of a badly timed sliding tackle can have gut-wrenching effects now that the forward momentum of the tackle colliding with the other player’s legs is visibly evident; many times these mistimed tackles result in an injury for the unlucky player that took the blow.

Taking this refined gameplay formula into either the basic Seasons Mode or FIFA Ultimate Team (FUT) improves the overall gameplay experience as a whole. Those wanting the more dynastic experience will find the most enjoyment out of FUT. Here you build your dream team by amassing players through card packs that can be purchased with the coins earned in-game or you can bid on them against others around the world in the Transfer Markets. This year, a RPG-lite gameplay mechanic has been added into the mix, with player chemistry affecting your team’s overall performance on the field. Place teammates from the same teams, nations, etc., together in a squad and they’ll actually perform better for it on the field. It’s a neat mechanic that truly affects how you’ll choose to build your perfect team. 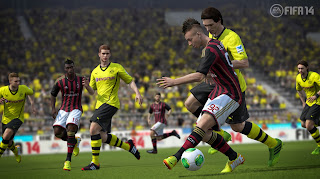 For those of us who prefer to stick with the more traditional (and less complicated) way to play the game, the Seasons Mode is the sweetest spot of all. If you desire, you can create a custom character and put them into the team of your choosing – L.A. Galaxy is my preference – and try to become one of the best players in the world. If you want a bit deeper experience you can even build a scouting network in the attempt to pull in the best new recruits to play by your side to help you achieve your fame as well. With 30 officially licensed leagues, 600+ clubs and 16,000 players featured in the game, there’s never an end to the the scouting options available here.

Before wrapping up this review, attention must be brought to how well this whole package is put together. Menus are large and easy to navigate. Skill games aren’t only fun, they are integrated into the main modes and unlock the deeper set of controls that are available for you to master. Also, even if you’re playing the game offline, it always feels connected, thanks to friends list stat integration, the expansive Transfer Market.and how easily it is to hop into an online match right with your own teams in the main gameplay modes. Just like in NHL 14, the commentary is nothing short of spectacular here too.

FIFA 14 doesn’t feature any major new gameplay engines or major improvements. Instead, EA Canada refined and improved its already fantastic virtual game of soccer to a new level of polish that brings the game to life in more natural and lifelike fashion. Soccer is an elegant and highly skilled game and it’s recreated here wonderfully, with an outstanding online community to enjoy it with. Even if its passing game isn’t on par with PES 14, FIFA 14 is still celebrating victorious on its end of the field.

PlayStation 4 hands on; this could well be the greatest console ever