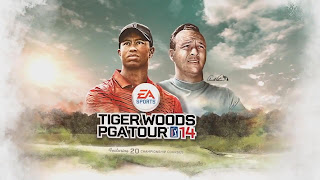 Driving back onto the fairway after last year’s shot in the rough.

With each year’s new Tiger Woods release, we usually get minor updates to the previous year’s outing. Last year, EA Tiburon rocked the boat by completely overhauling the swing mechanics that fans had grown so accustomed to over the years. This revolutionized the core gameplay for the series, but technical issues and a terribly implemented IAP/extra content system caused quite the uproar with fans. With Tiger Woods PGA Tour 14: The Masters Historic Edition, EA Tiburon takes us on a trip through history in the hopes of crafting a new title that’s worth sinking a club into.

For the most part, it succeeds. The all-new game mode, Legends of the Majors, is indeed the true highlight of this year’s game. In this mode you’ll travel back in time to compete as and against some of the greatest players that defined the gentleman’s game of golf: Arnold Palmer, Jack Nicklaus, Gary Player, Lee Trevino, Ben Hogan, Sam Snead and Boggy Jones. There’s a great vintage visual overlay aesthetic in play in this mode that finds the visuals comprised without colour in the 1873 opening challenge, slowly adding bits of colour to the pallet as you progress throughout time until you’re playing in brilliant HD with the legend himself, Tiger Woods. 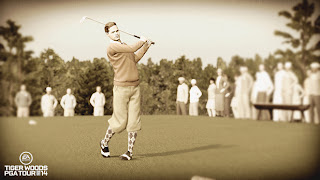 For those who truly love the game of golf, this is a brilliant way to relive some of the greatest moments the game has ever known. Seeing the original course designs the way they were over a century ago and these famed heroes of the sport reborn in their original attire is spectacularly pleasing. This is a brilliant addition to the traditional Tiger Woods game and for those who truly love the game of golf, this just might be the perfect reason to grab a copy of this year’s game.
Moving into the core modes that we’re accustomed to, you’ll find another surprise – you can finally take your created player through all four of the golf majors for the first time: the Masters Tournament, the U.S. Open, the Open Championship and the PGA Championship. Another first, which is long overdue, yet will please the lady golfers out there, is that the LPGA is now in full swing. This addition adds a few notorious female golfers like Paula Creamer, Stacey Lewis and Lexi Thompson to the rosters along with it.
PGA Tour 14 brings back the robust online experience that it started last year with the County Clubs. These clubs allow you to either create or join up to 100 other players around the world to compete against each other in daily events that offer up large coin pay-outs, which is the currency used to purchase extra content within the game. Once joined into a club, its member’s stats are integrated into every aspect of your game. For example, between holes in the Career mode you’ll find leaderboards that will show how you stack up against other members on that particular hole. Also, you can chat with your club mates at any time, regardless of what modes each of you are in. 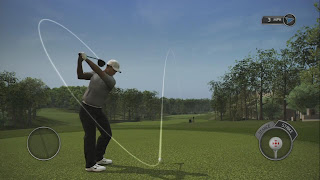 With all of its new modes and features, it all comes down to what the game actually feels like once you hit the links. Once again, EA Tiburon delivers. Taking last year’s Total Swing Control feature that so radically altered the way we played the in-home game of golf and refining it further was a given. Yet, it’s taken it one step further by adding a new feature called Golfer Swing Styles. Here your created character is allowed the ability to choose his/her own personal play style: power vs. control; draw vs. fade; righty vs. lefty and the preferred trajectory (low, medium or high). While this might not seem to make a big difference on paper, in play it makes a world of difference. Power players can easily outdrive a control player, but a small slip left/right on your forward swing will find your ball veering off the fairway and into the second cut; whereas the control player’s additional tolerance for minor mistakes will keep the ball on the fairway.
While the Total Swing Controls have been further refined, making them even more accessible to use than last year, this is in part due to the implementation of improved tutorials. But, they’re still not up to par just yet. The tutorials only give you the basics and even the in-game manual doesn’t fully map out the controls for you. I’d somehow forgotten how to apply spin to my ball once it was inflight and nowhere in the tutorials or the in-game manual did I find mention of this; proper tutorials and manuals are needed for this type of game and again, EA Tiburon is stuck in the bunker on this front.
Once you get it all down though, pulling back your club to the desired height to set your power and pushing forward to connect your shot as straight as possible simply feels natural, and it’s completely satisfying when you nail that perfect drive down a long fairway. Manually adjusting your player’s feet and setting your point of impact on your golf ball are also necessary to placing your shots where you desire. Learning to accurately draw and fade shots, control the trajectory of your ball’s flight path to accommodate for wind conditions, as well as getting the tempo of your swing down pat, altogether gives you the feeling of actually playing golf in an in-home virtual setting. And for the golf enthusiast looking for a real challenge, EA Tiburon chipped a Simulation difficulty into the game, bringing the most authentic challenge to the franchise for those who think they’ve got the skills for it. 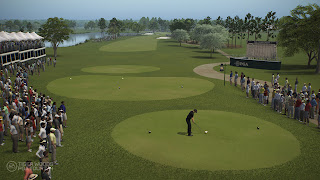 The in-game presentation is another highlight of the title. The commentary is spot-on, as is expected, but it’s the enormous amount of camera angles and shots that truly gives the presentation a cinematic feel to it. Character animations are fluid and lifelike, and the game’s lighting effects are truly outstanding, with day and night cycles shifting the sunlight off the courses just as it would if you were actually playing the courses in real-life. There’s some texture loading and pop-in issues scattered about here and there, but nothing major to speak of. The real technical issue that bogs the game down isn’t on the course, but in the game’s menus. The game is tied into EA’s servers, which creates a great deal of lengthy loading/saving points. Simple things like changing your character’s clothes and equipment are marred by these long wait times.
For the PlayStation Move owners out there, Move once again excels in bringing its precision motion controls to the franchise. While it takes some time to get the hang of the controls – the lack of tutorials doesn’t help – once you do, it’s a fun alternative that will get you off your couch from time to time.
Tiger Woods PGA Tour 14: The Masters Historic Edition brings a full set of clubs to the course with this year’s edition of the long running franchise. A few technical issues aside, this year’s game is once again refined over its previous outing, but it’s when EA Tiburon decided to take us on a journey through some of the sport’s greatest moments in its history – bringing many of the classic heroes back to life once again – it’s recreated the gentleman’s game of golf in virtual format and it will no doubt bring joy to the hearts of golf enthusiast around the world.