EA draws a lot of criticism for its core sports franchises primarily featuring minor tweaks and improvements, along with rosters updates each year, and to some degree it’s understandable. As you can see in our review, this year’s Madden title tackled itself right into this category. Yet, earlier this year EA Tiburon teed up with a host of improvements and modes in Tiger Woods PGA Tour 14: The Masters Historic Edition and now EA Canada has hit the ice in full force in NHL 14, delivering a virtual hockey experience that is the closest thing you’ll find to stepping into the rink for yourself.

Since 2009, EA Canada has been on a mission to bring the gameplay and physics of hockey to life accurately in virtual format, with each year’s release offering new game engines and refinements. While this is true for all of EA’s sports titles, the effort put behind these yearly releases has been blatantly obvious and when playing NHL 14 it truly feels like an authentic hockey experience. The sport of hockey isn’t only about scoring goals: major collisions, scrambling on the boards for the puck, maintaining a solid forecheck and defense, and even aggression are important aspects of the game. But it’s also the little nuances like the erratic bounces of the hockey puck after it’s rebounded off the goalie, the way a player skates, puck dumps for line changes and those intense power play moments when four defensemen are doing everything possible to simply clear the puck out of their zones. These are the things that paying fans attend games for and the accurate representation of these things in NHL 14 is a large part of what makes it such a great title. 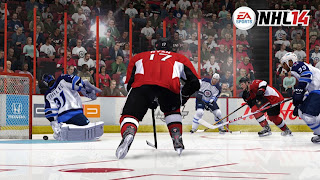 Last year’s True Performance Engine has been enhanced to further improve skating abilities, with a noticeable upgrade in speed and responsiveness, and a new collision engine turns the impact of landing a big hit way up. If that collision sparks a fight, you’ll find that the fighting elements of the game have gotten a complete overhaul, thanks to the new Enforcer Engine that comes from EA’s Fight Night franchise. It isn’t just the new engines that improves the gameplay though, the streamlined controls allow the majority of the game to be effectively played with the use of only the two analogue sticks, which alleviates the complicated control schemes that weighed down past entries. Also, the One-Touch Deke system allows the L1 button to be pressed in tandem with the left analogue stick to perform reactive dekes. This keeps you immersed in the game and the new engines work together to make the gameplay not only more accessible, but fun.

Coupling all of this together creates some memorable moments in the process. Witnessing a goalie quickly jam his glove behind him to stop the puck from slipping through the “five-hole” or preemptively positioning for a quick one timer you’re setting up on him brings an incredible sense of realism to the game. In one instance I put a brutal hit on the opposing team’s captain only to instantly find his teammate’s gloves flying in the air and pounding on my face seconds later. That’s the stuff of live hockey games, not video games, but it is now and boy does it make a difference. Let’s not forget the incredible commentary and highlight reels that give the game that television worthy cinematic appeal. Simply put, NHL 14 plays a beautiful game of hockey. 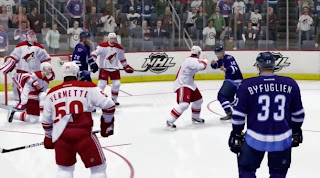 Last year’s Be A Pro Mode has been renamed and revamped to the Live the Life Mode. Here you can either create your own custom player (women included) or strap on the skates of an actual NHL pro. At times during your career you’ll be approached for interview questions and these short segments change how your peers think of you and even affect your future endorsements. The Hockey Ultimate Team makes its return, allowing you to spend the EA Pucks earned throughout all the game modes to purchase card packs to build your personal dream team, which you can then take online to face off against others. If this is not enough though, there’s the much beloved offline dynasty mode, Be A GM, which allows complete franchise management. It is now online and offers what just might be the most robust sports dynasty experience, well, ever. GM Connected allows leagues of up to 750 players to be created and features social integrations built into the system to make player trades and notifications accessible. Those looking for an immersive dynasty experience will find enough here to keep them busy until the inevitable NHL 15 skates around sometime next year.

But there’s another mode that’s less serious packed that deserves special praise: NHL ‘94 Anniversary Mode. Do you remember playing NHL ‘94? If so, this single mode ensures that you will never let this title to be removed from your game collection. Bringing back the arcade styled gameplay, the blue ice and the simplified controls of that fantastic game and infusing it with the very same HD graphics and player AI of NHL 14 is, to put it quite plainly, awesome – even the stars surrounding the players are returned. It’s an absolutely fantastic addition to an already great game and one that’s a blast to play with friends.

While this year’s Madden title merely featured minor improvements and tweaks to its existing formula, EA Canada continues to push the NHL series one step closer to delivering an authentic feel to the virtual hockey experience with NHL 14. The new engines deliver on the gameplay front and GM Connected taking the dynasty experience of the Be A GM mode online for the first time all but guarantees hundreds of hours of fun for those wanting to really sink their skates in deep. Yet, it’s the recreation of the much beloved NHL ‘94 in HD with current rosters that is the icing on the cake and it’s one that ensures that if you’re a hockey fan, you should absolutely own this year’s release.