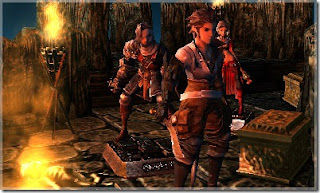 What a brilliant game Crimson Shroud is. Yasumi Matsuno (of Vagrant Story and Final Fantasy XII fame) has done what his compatriots, Yoot Saito (Aero Porter) and Goichi Suda (Liberation Maiden) were not able to in the Guild01 compilation – build a small game that is not only innovative and clever, but is also as entertaining as full retail releases.

This game has been labelled as a JRPG by many, but it’s not really. What it is in actuality is a board game mixed with a choose-your-own-adventure novel. The play proceeds in a remarkably simple fashion – players select a room from a map, and their characters will move to that room. Depending on what is in the room they’ll either have to battle some monsters or read through a story sequence.

Yes, read. This game has no spoken dialogue, and it’s the better for it. There is a lot of text in the game and it is of an incredibly high quality for the genre. There’s some genuinely interesting directions the narrative spins into, and though the game is far too brief to build a convincing world, the snippets that we do see make us want more. The characters are also very relatable in their dialogue and the paragraphs of character exploration that players will be reading, which they needed to be because they literally do not move through the entire game. 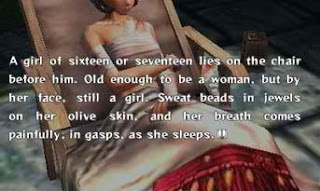 That brings me to the other unique feature of the game – the characters in the game are painted miniatures. If you have had any experience playing a Warhammer game, or Dungeons & Dragons around the tabletop then you’ll get a real thrill from seeing the intricately designed miniatures standing around environments that look like model dioramas designed for a tabletop game. The depths in which Matsuno has gone to make this experience authentic is truly mind-blowing for an old-school board game fan as myself. Kill an enemy miniature and it will topple over. On the base is a “Level-5” logo – of the kind that you’ll find on most real-world miniatures that you might buy.

The secret to success is always in the details. The map, displayed on the touch screen, looks like it was taken straight out of a classic Dungeons & Dragons map. Most actions can be ‘enhanced’ by rolling dice, which are the kinds of 4, 6, 8, 10, 12, and 20 face shapes that players throw around in real table-top RPGs. In any video-game RPG these dice rolls are taking place anyway, but always in the background. Making players actually throw those dice is a subtle but highly effective way of engaging them much more deeply into the game by giving them a granular control over the progress it. 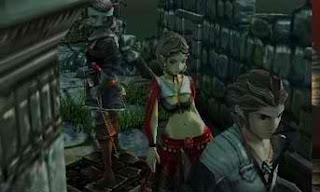 All the presentation wins would be for nothing if Crimson Shroud did not play well, but thankfully it does. Despite the limited ability to interact with the environment there’s some interesting puzzles to work through, but much more time is spent in combat, which quickly reveals itself to be highly strategic. It plays out in a turn-based fashion, and the game rewards players that use a wide range of different abilities by giving them bonus “dice” to roll when they don’t repeat abilities from turn to turn. Because those dice are critical for swinging a battle to your side, you’re going to need to be really strategic when you use those healing abilities, which makes a nice change from the RPG norm, where one character is inevitably dedicated to spamming the heal command.

And that’s that. Crimson Shroud pulls together a deep combat system and the kind of adventuring that is the closest the games industry has come to offering a true Dungeons & Dragons experience on a console. This is the first game in a very long time that I have played and left entirely unfulfilled with. Like Liberation Maiden and Aero Porter, this is a fairly short game and a New Game Plus option is just not adequate, since the story remains the same, and it’s the story and exploration that makes this game so engaging. I want this expanded into a full retail game.

Ninja Gaiden Sigma 2 Plus slices onto U.S. Vitas in February