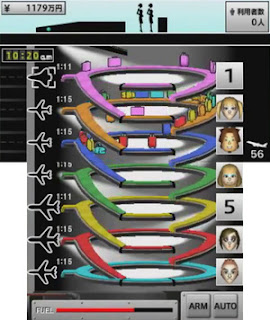 Having now played two of the four games that Level 5 and various game auteurs threw together for the Guild01 3DS retail release, I am not surprised that the compilation was a hit in Japan. Liberation Maiden was a flawed bit of genius, and Aero Porter is an even more flawed piece of even greater genius.

Thank goodness the eShop allowed them to be released individually, however, as I am certain that this game will be seen as the weak black sheep of the group. Unfairly so, I believe, but this is going to be a polarising title.

This game comes to us from Vivarium, and the mind of one Yoot Saito. Perhaps he’s not as famous as Liberation Maiden’s developer, Goichi Suda, but Saito has a heck of a resume in his own right – Seaman and Seaman 2, Odama, and most importantly Sim Tower. Aero Porter is an almost ridiculously simple game, but thanks to a mind-blowing difficulty curve and an incredibly slick interface, it will simultaneously frustrate and delight, and at times that makes the game feel very confused indeed.

The entire game is about loading baggage on planes. Players are given a stack of carousels, and each will be colour coded to a certain plane. Coloured luggage will drop down on to the carousels, and players need to match the bag to the plane. Simple, right? Things get very difficult, very quickly. The only way to move baggage from one carousel to another is to lower a lever, which lowers the levers for every baggage carousel. So, if you’re looking to drop a yellow bag from the red carousel, further down the stack you’re also quite possibly going to be dropping a blue piece of baggage from its correct carousel to the green carousel. 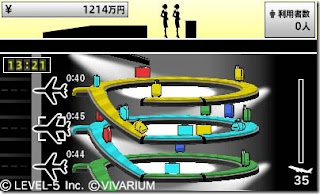 Couple this with a couple of stress factors – you’ll need to fill a plane within a strict time limit, you need to hit a certain number of passengers each day, and there’s a fuel gauge that you’ll need to be aware of, and Aero Porter goes from a simple game with a slick art style to a maddeningly-difficult time management game in the space of the tutorial level to the main game.

But wait, it gets even worse/ better! Every so often one piece of baggage will show up that requires a bit of extra work. A VIP bag needs to be loaded onto a plane first, a bomb has to be uncovered (by blowing into the 3DS microphone) and then loaded onto a truck, rather than a plane. Individually these are simple enough challenges, but in amongst juggling seven or so different carousels, it’s enough to turn most players right off the game.

And that’s Aero Porter’s greatest flaw. Presenting a comfortably relaxed aesthetic, and then hitting players with genuine difficulty is setting them up for disappointment. If it clicks, it’s maddeningly addictive, but the design of the game seems to be targeting players that it won’t click with – they’ll just find it maddening.

Getting through that bit of confusion, Aero Porter is a highly intelligent little puzzle game with just enough bite for experienced gamers to get something out of it. You get the impression that this game was an opportunity for Saito to play around with some ideas rather than an effort to make a timeless game, but as a cheap downloadable title it works at that.