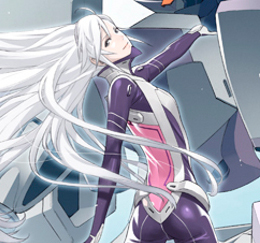 Every so often the games industry throws up an auteur – a true artist whose games are not necessarily understood, let alone liked. Like foreign films though, these auteurs find small, committed fan bases of people who appreciate what they are trying to do, even if they occasionally miss the mark in terms of providing an entertaining game.

Goichi Suda is most definitely an auteur. At a time where the Japanese games industry is criticised of lacking creativity, Suda is out there pushing every boundary he could find. And now his development team at Grasshopper Manufacture have popped up and developed a game for the Nintendo 3DS. Liberation Maiden pushes far fewer creative boundaries than anyone who has played a No More Heroes game or Lollipop Chainsaw might expect, but it’s a breathtaking ride nonetheless.

It’s a very limited game, with just a handful of levels, each only a few short minutes long. In Japan this was released in retail as part of a collection of games, and it does feel like it was made for a compilation. That said, what there is in the game well and truly justifies its asking price. The game puts you in control of a female president of a futuristic Japan, responsible for singlehandedly repelling an invasion of the country. 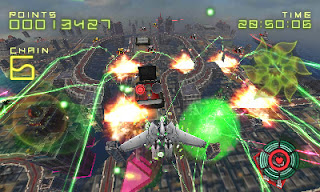 Madame president is in command of a giant flying robot (yep, this game is made in Japan), and so the game largely plays out in the sky. Each level plays out around a similar theme; fly from area to area wiping out the masses of enemies that stand in your way, and in many ways this game feels like it wants to be a bullet-hell shooter but was stuck into an awkward camera angle to try and take advantage of that 3D screen. Suda is very familiar with the bullet hell genre, but you can tell his team struggled with making 3D work here. The camera is almost always pointing at an angle that looks down at the ground. This makes some sense since a lot of the enemies are land-based. It also makes looking around painfully difficult at time, and so visibility is never quite what it needs to be when it comes to the airborne threats for a game that can be punishing on the lowest difficulty level.

I’m not great at bullet-hells, and yes, I died often on the “easy” setting, and often those deaths were frustrating because they came from places I simply could not see. With practice I started to develop a sixth sense of sorts and was able to predict what was coming better, but that was more a process of memorisation than any real testing of my skills. I’m not a fan of that style of gameplay. There’s not a great deal of variety in the game either – there’s a couple of different weapons to play with, but the enemy variety is limited and the tactics to get through the levels is largely unchanged throughout. 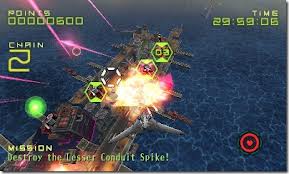 But like many Suda games, the actual gameplay is almost pointless to the experience. Liberation Maiden is a game of excessive energy and as a piece of pure entertainment, it’s hard to think of anything better currently on the 3DS.

Like a good bullet hell, the action of Liberation Maiden is turned up to 11. Everywhere you look there is something happening, and the overall tapestry is therefore vibrant and exciting. The framerate never drops. The visual style might be simple, but it’s so dynamic that it hardly matters.
And the plot, though simple, is engaging. Suda’s always had a touch with making interesting stories out of minimalist cut scenes and dialogue. He’s better when he’s playing within the grindhouse genre (Shadows of the Damned, Lollipop Chainsaw), but Liberation Maiden is impressive nonetheless, and the female president is a character I would like to see more off.
Liberation Maiden is yet another game that is reliably niche from Suda. It’s interactive art, but to some people that’ll be about as interesting as going to a real art gallery – in other words, they’ll be bored out of their brains. Because underneath the clever ideas and stunning presentation, there really is very little meat for people that want a game more than an experience.

The upcoming games to look forward to (EB World Expo)