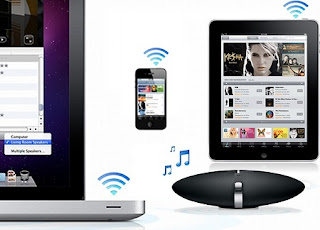 I’ve been playing around with Apple’s AirPlay feature via iPad and Apple TV, and it really does surprise me that more isn’t made of this feature. Put the two of them together and you get a console-quality experience, which you’re then able to pick up and seamlessly take on the road with you.

In fact, the experience that AirPlay offers is eerily close to the kind of experience that Nintendo is promising the Wii U will offer. And by playing with AirPlay, perhaps we’re getting both a sneak preview into Nintendo’s next console, and perhaps a warning siren about the Wii U’s future.

But first, AirPlay. There’s a range of games that have been optimied for AirPlay, and they’re all pretty incredible on the big HD TV screen. Real Racing 2 and Modern Combat 3 are the biggest highlights of this range of games. Both are not quite up to the standards of a PS3 or Xbox 360, but well beyond the output of the Nintendo Wii. Not bad for a handheld device.

Playing these games is also very comfortable – for anyone who is used to playing games on touch screens, that is. Once you’ve set up the virtual buttons in comfortable positions so that you no longer need to look down at the screen, it’s a short process of acclimatisation, and using the iPad as a controller starts to feel as intuitive as physical buttons. Now I’ve never really understood how people struggle with virtual controls though, so perhaps I’m just lucky here, but there’s so many different ways to play these games – including gyro controls, that most people should find a control set up that is comfortable for them.

Those games that are AirPlay optimised also use the iPad’s screen for maps and other supplementary information – much like what the Wii U will offer once Nintendo’s new console launches. While not every game is upscaled onto the big screen through the Apple TV (and it is disappointing there aren’t more games that support it), almost every other game is still playable through mirroring too. This simply replicates the iPad screen on the TV, allowing you to “blow up” everything that you’re doing.

So, for instance, I plugged in my 60beat controller and got into The Bard’s Tale through AirPlay. The experience was literally that of a console game. It’s a little unwieldy in that I needed three separate pieces of technology to make it happen, but it worked, and then I was able to continue playing the exact same game of The Bards Tale on the train.

And consider this – you’ll be able to use AirPlay and the OnLive app for full console games if you’re in America, and on top of that, Apple is potentially developing a controller of its own. With 20,000+ games on the app store, and with the inevitable scramble that would occur to support this controller, pairing an Apple TV with an iPad (or iPhone), is going to give gamers access to a very, very big library of games.

The reality is that I’ve spent more time messing around with AirPlay than playing my other consoles in the past few weeks. And yet, the versatility of AirPlay as a gaming device is something I read very little about.

That got me to thinking: why is it that such a neat feature is all but ignored? It’s not because Apple is a niche company (it being the largest company in the world and all), or that the iPad (or Apple TV) has performed poorly in the market. The consumer interest is there.

And yet developers haven’t really shown interest in AirPlay. One new release game in 100, if that, supports AirPlay. Is this because it’s hard to develop for (given Apple’s history, unlikely)? Or is there another, more worrying cause for the lack of interest?

The answer, regardless of what it is, is a bit of a worry when we get to looking at the Wii U. The feature that Nintendo is pushing most heavily on its upcoming console is a feature that is closest to being a failure in terms of gaming from Apple (it’s worth noting that the Apple TV + iPad combo is popular for presentations and the like in business settings). Given there’s been an underwhelming response to the Wii U amongst analysts, the market, and just about everyone else outside of the Nintendo faithful, here’s a bit of a worrying thought:

“Perhaps people just don’t care for this kind of gameplay.”

Hit the mountain with two new modes in SSX