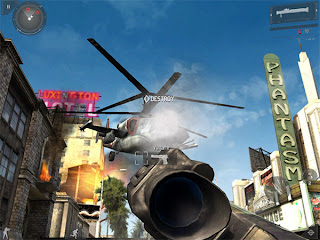 As much as I try, sometimes it’s impossible to avoid Gameloft. As a rule of thumb I don’t like what Gameloft produces as it tends to be technically competent, but soulless and cynical copies of better games, but sometimes Gameloft hits the big time with its franchises.

Modern Combat is essentially the Call of Duty of the iPad. It’s a big, explosive and, importantly, full-featured FPS on a format that doesn’t have the over-abundance of shooters that we see on the ‘main’ consoles. So Gameloft saw the value in targetting the genre faithful with a ‘new’ FPS franchise. Despite my distaste for games that shamelessly copy other examples of the genre, and despite Modern Combat shamelessly copying Call of Duty, I’m going to have to admit here that Gameloft has produced the biggest iPad experience to date with Modern Combat 3, and this is a game that is deserving of the popularity it’s found amongst iPad gamers.

It has to be repeated, though – this is a precise, to the letter, copy of the Call of Duty formula. There are large-scale firefights, broken up with brief plot sequences, QTE sequences and the occasional corridor to run down. And just like Call of Duty, the singleplayer game is no more than a tutorial for the multiplayer. 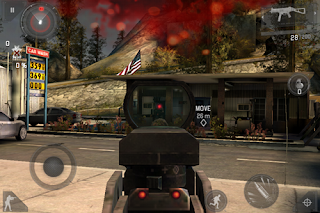 Surprisingly, the game often comes close to the basic features that make a Call of Duty game great – the energy is there, even if the script writing and acting is not. The levels are carbon copies and soulless, yes, but they’re designed will well-defined chokepoints and there are some especially well-balanced multiplayer maps.

Most impressively, though, the game looks amazing. Squint and you’ll feel like you’re playing a real AAA-grade shooter. Open the eyes a little further and, of course, the complete lack of originality hits home, but I don’t want to take anything away from this game – especially on the iPad 3, this is beyond even the Vita’s capabilities. Using an Apple TV, you can even stream this one in 720p to your lovely TV at home, driving home just how much technical mastery Gameloft has over the iPad hardware.

An active community keeps the multiplayer worthwhile, although Gameloft is somewhat less active in patrolling servers from opponents gaming the system, and server connections are somewhat unstable. But, get a game going and this is easily the most “hardcore” fun you’ll be having on your iPad. 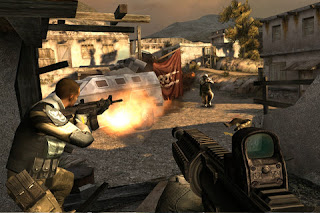 The only area where the game really falls down is the controls. Anyone who has spent enough time with the iPad knows it’s possible to become familiar enough with the controls to get through the game – and in multiplayer everyone is playing on a level playing field – but it never feels quite as comfortable as it should, especially considering the icon for scope sight (you know, the “aim” button) is a tiny couple of pixels buried in a corner. The option to optimise controls, or better yet, plug the 60beat controller in, would have helped tremendously here.

I also take issue to Gameloft’s continued insistence that people play their games logged in to its own servers. Guys, Game Center is there and people like it. Use it! Completely unacceptable that Game Center is turned off completely (even for trophies) by what is essentially the premier iPad developer.

All that aside, Modern Combat 3 is the first time I really am going to commend Gameloft for doing what it does best – ripping off the bigger, better companies. Modern Combat 3 is inferior to Call of Duty, but it’s still decent fun, and it’s a genuine showcase for the iPad’s capabilities.

Activision Blizzard is up for sale: anyone still think the games industry is not about to crash?

Sony acquires Gaikai – I was right (more or less)