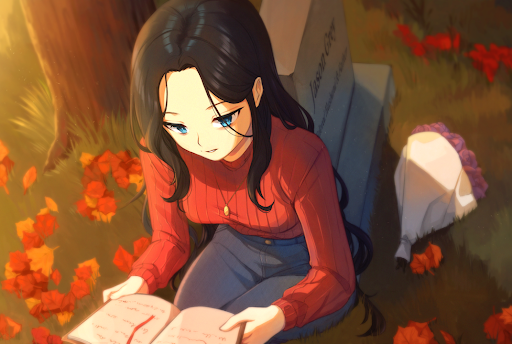 It took me one screenshot to realise that I was probably going to love Kohana, a small little slice of a visual novel, but with an astoundingly strong concept and aesthetic. The game takes place in a Japanese confectionary store (named Kohana), in which humans and yokai co-exist together. In it, the confectioner that runs the store is being attacked by a fox-shaped shadow, which the store’s guardian Komainu vows to destroy. But the confectioner doesn’t want that, even at the cost of his own life… something tells me tragedy’s afoot. 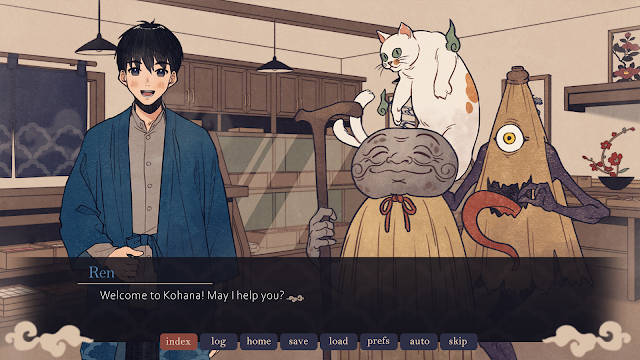 The game is only around 9,000 words long, so it’s a single-sitting deal, but it has such gorgeous artwork, and with two different endings, this one will be well worth a replay. More than anything else, though it’s the use of Japanese traditional spirit monsters, the yokai, that caught my attention. This game seems to be very earnest in how it handles them, and for yokai otaku, there will be more than a few familiar faces to spot along the way.
Sky Kingdom Enigma
Last week’s itch.io wrap was all about Game Boy games, as there was a special game jam going on to encourage people to create new games for the very old console. There are still some interesting titles coming from that little project, and one of the most noteworthy this week is Sky Kingdom Enigma. What’s currently available is only the first chapter, but everything about this RPG project has me desperately hoping the developer kicks on with it from here. 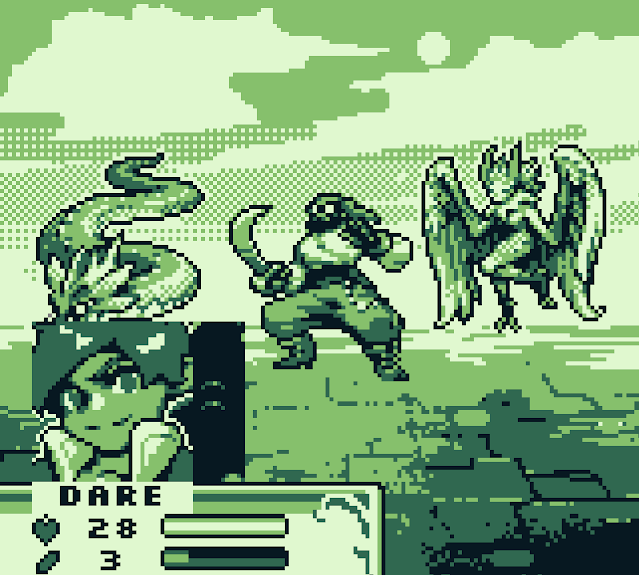 This is a turn-based “skytech” RPG. You’ll be flying around as a group of sky pirates, battling with other denizens of the sky and visit islands floating high above the clouds. It’s the incredibly detailed art that the team have implemented into this game that makes it look both Game Boy and… not, that makes this one interesting. A homage to the games we all loved playing as kids, but with a very modern eye for detail and art.

Eye of the Moon

One of the great and enduring values of itch.io is that it gives “world games” a chance to thrive. Where games might not have otherwise found a publisher or audience, by self-publishing on itch.io more than a few have been picked up and gone on to achieve some great things. If there is any justice Eye of the Moon will be one of those games. Not only does it have some beautiful and detailed character art, but this one promises to be a great introduction to Filipino indigenous mythology. 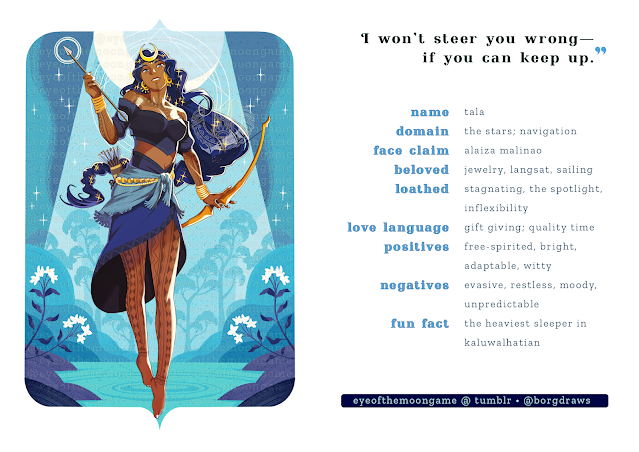 The game is authentic and has been written by a Filipina woman, and weaves a story about protecting your home, the complex dynamics of family, and relying on each other. Romance is integral to the story, and there are two bisexual love interests and a poly route, to give a broad range of players a story they can relate to. There are also multiple endings, and, as mentioned, it might well be the first time you’ve come across deities like Mayari and Apolaki, so you’ll learn something about a native peoples in playing this game.

This is another demo for a new Game Boy game that was developed for that Game Boy Jam, but Severen is noteworthy because it comes from the same developer as Deadeus, a Game Boy game that I was rather enamoured with a few years ago. This developer, -IZMA- very much looks set to back up the success of that creepy, creepy game with this equally creepy thing. 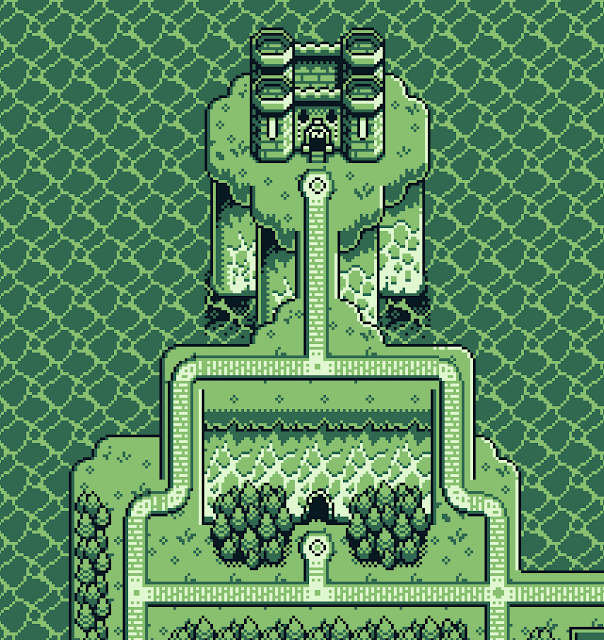 Severen is also notable in that it is being built in the Alpha of the third iteration of Game Boy Studio – basically, the tool that all these modern Game Boy developers are using for their projects. What -IZMA- achieves with Severen might well highlight what this software is capable of, and it certainly seems to be ambitious. There will be 10 levels, along with an overworld filled with puzzles and NPC areas to explore, as well as action platforming. There are also many different endings to look forward to (much as Deadeus featured more endings than you can count).

MMMMM (what a great title for a great acronym) looks like it is a lot of fun. It’s a blend of RPG and meta-puzzle game, where you need to help Milton (who is either a rabbit or a mouse, but I’m leaning towards mouse) escape a maze, with the assistance of an angel-dog thing called Metatron. 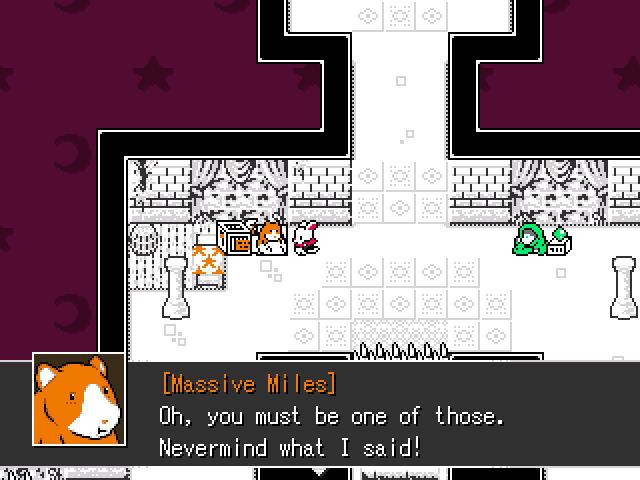 As you play, you’ll be asked to interact with files that are inside the game’s directory. You’ll also need a device with a QR reader handy to make progress. We’ve seen games do some clever things with meta-puzzles in the past (think Doki Doki Literature Club), and when it works, it is really compelling. This one has the potential to be a really distinctive, original and interesting game. And that’s before you get to the combat side of things, which looks like it’s adorable (especially since you can unlock a bunch of costumes for Milton). Most impressively of all, though, is the fact that the game was all built in RPG Maker 2003… that’s some serious work that the developers have done to strongarm it into this shape.

For the final game this week (and yes, there are six rather than four, since itch.io had such a bumper week), I wanted to highlight Graveyard Girls simply because I love the art in it so much. The character designs are impeccable, and the story behind the game seems to be quite emotive too – the developer clearly went into this wanting to help normalise talking about death and grief, and that’s a subject that video games have not really canvased much in the past (and the rare time they have it has tended to be quite powerful). 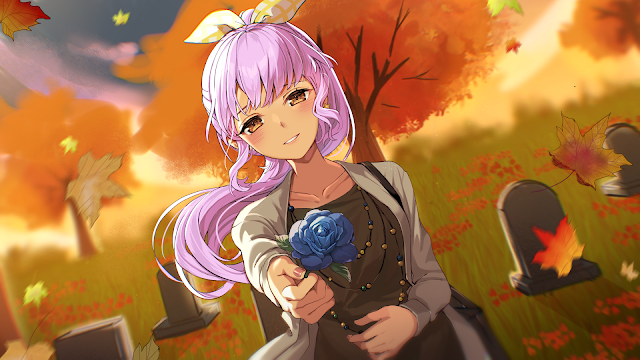 The game itself is quite brief at 14,000 words (you’ll play it in an hour or so), and the one comment on the game’s itch.io page says it all, really: “Thank you for making this. I lost my dad 5 years ago so this feels really close to home. Just like Elle, he never knew I finish college either. Even though I loved him most, I buried my emotions, but after playing this, I remembered all the good times after all these years. What a beautiful game.” We could all do with more games being “beautiful” like this.

Poll of the week: Which Koei Tecmo 2022 release are you most looking forward to?