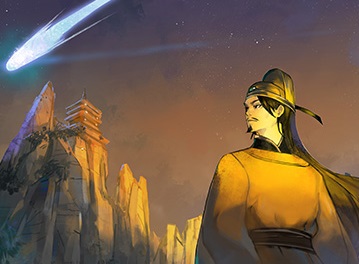 Chinese poetry is, to westerners, esoteric at the best of times. Unlike other forms of the written word, poetry is notoriously difficult to translate effectively from one language to another, since a straight word-for-word translation would generally upset the rhythms and tonal quality that is so critical to a poem.
Related reading: Another Switch rhythm game that tells a very different cultural story is the classical piano title Pianista. Read our review here
And then there’s the general disinterest within western culture for poetry to contend with. Don’t think otherwise because everyone reads a poem or two during their school years – people are as likely to read a book of poetry for pleasure as they are to willingly hand over cash to watch an opera. For a country like China, where poetry is revered for its personal and philosophical insights, as well as its elegance and beauty as a form, figuring out how to actually export its classical poems in a way that’s palatable to western audiences must surely be a head-scratcher.
But dear lord do I think that the developers of Lyrica have hit on something magical in trying to do just that.

This game really has the most amazing soundtrack #NintendoSwitch pic.twitter.com/3hhfXKQbl2

Lyrica is a fairly simple rhythm game, of the Osu! variety. Icons appear on the screen in time with the music, and you need to tap, hold, and drag those icons in harmony with the beat and rhythm in order to get a good score. If you’ve played more than a few rhythm games before, you’ve almost certainly played one like Lyrica, as the Osu! format is fairly standard. Other than having particularly well choreographed icons, such that it feels like you’re genuinely playing along with the music, there’s nothing to really stand out there.
What does stand out is the music itself. Whether other rhythm games are a hodgepodge of musical tracks, genres, and licenses, or have a broad theme (the best vocaloid music, etc), Lyrica is razor focused on one single theme; taking Chinese classical poems and turning them into lyrics for music. There’s still some nice variety in the musical genres across the 57 tracks in-game, ranging from powerful ballads through to jazzy rhythms, and even some rock, but with almost all the tracks being poems written by a handful of classical Chinese authors, there’s a powerful consistency running through the tracklist. That consistency does wonders in making this game to feel more cohesive than almost any other rhythm game that I’ve played.
The developers have come up with a really clever way to introduce the poems to a non-Chinese audience too. In-game, the poems are written in untranslated Chinese characters, with some beautiful, artful brushstroke popping up onto the screen to enhance the aesthetic experience of each music track. This means that the words aren’t going to make a great deal of sense to anyone who can’t understand the language, but given the analytical and interpretive skills required of poetry, having the poems translated into English would have been overwhelming to the audience trying to make sense of it all. Instead, Lyrica relies on the nature of music being a universal language, setting moods and telling stories by the tones set in the compositions, and through this you can certainly find your favourite pieces just from the music that sounds best to your ear – much like opera, really. Most people don’t understand the words sung in an opera, but they certainly get a strong sensation of what’s going on through the tone of the music.

Before you play each song, you can pull up a little info bar that will tell you the name of the poem and its author (as well as a copy of the poem itself, but again, untranslated and therefore of limited use to those who don’t know the language). Unfortunately I had a devil of a time trying to research the specific poems that I was experiencing. Tracking down information on the authors – Li Bai, Liu Yun and others, was easy enough, and plenty of their poems have been translated at some time or another. But it was often far too hard to figure out if the specific poem in the game was one of the translations – even when I searched for it by the title given in-game. Other tracks in the playlist are one offs that, as far as I can tell, describe classical Chinese epic stories and poems, such as Mulan and Pledge To Heaven. These were easy enough titles to research up (yes, it’s that Mulan, as far as I can tell), but it’s harder to piece exactly where the music fits in with the overall story at times. Mulan’s a much longer poem than would seem to fit into the in-game music track, for example.
None of the difficulties I had with deciphering the poems is the game’s fault, I must stress. It’s simply reflective of just how limited the access that we have to this material is in the west. It’s testament to how inspiring I found Lyrica’s vision and presentation that I’ve come away from it wanting to learn so badly. I’m sure, as I start reading more deeply into the poems and tracking down translations, that I’ll also start to make better sense of how they’ve been adapted into this game. For now, however, it’s the most appealing kind of cultural and language barrier that I’m trying to overcome with Lyrica – I want to know more, and I get the sense that I’ll love what I’ll find on the other end, but Lyrica itself can only be the launching pad.
Impressively, the developers of Lyrica could have stopped there, having achieved the goal of producing something inspiring, educational, and entertaining. But it doesn’t stop there at all. Lyrica also has a story mode which, albeit brief, was still more than enough to get me hitting up Wikipedia and looking for books for additional reading. The story mode is structured as a series of art panels that slowly unlock as you complete objectives within the rhythm games, and with each panel that is cleared away, you get a cut scene that explores a story that moves between the people of history and those in the modern day. Right from the start, as the first series of panels told me a story within the An Lushan rebellion of 756AD, I was taking notes on names and events to read up on, and the developers have tackled this storytelling with an earnestness that’s genuinely appealing.

This might just be the classiest rhythm game ever. #NintendoSwitch pic.twitter.com/VzhyOuXAeg

There are even achievements and a Challenge Mode, which unlocks you even more characters and tracks to play, and the game’s experience system makes sure that it drip feeds you new music to play at just the right rate to keep playing on, and on, and on. There are four difficulty settings, and while rhythm game veterans will likely find the first three difficulties too easy, the highest setting should provide an engaging enough challenge, while the easiest difficulty seeing is perhaps the most accessible that I’ve seen in a genre that isn’t usually that interested in accessibility.
The only issue that I have with Lyrica is that it’s a little too forgiving on the precise timing required to score a “perfect” rating. Perhaps it is just that I’ve been playing music my entire life and had precision with timing drilled into my brain thanks to the metronome (that hellspawned device), but in Lyrica you’ve got a ridiculously wide window around the precise beat required to return a “perfect” rating. It’s to the point that you can be tapping almost on another beat entirely and still get those perfects. The difficulty’s still there thanks to the complexity of the beat maps, but a rhythm game that isn’t demanding on rhythm has lost sight of what it is to test a player’s rhythm, a little.

It’s rare that I find a game so completely inspiring that it continues to consume my thoughts beyond the game, and encourages me to learn something new. I’ve always had an interest in Chinese history and artistic tradition. I’ve always had an interest in poetry. I’ve never had an excuse to delve into Chinese poetry and the history of its poets before Lyrica. And I’m so thankful that Lyrica has given me the reminder and excuse to do so.

Lapis x Labyrinth is shaping up to be a delight