The Etrian Odyssey series of dungeon crawlers, which has been kicking around on Nintendo handhelds since back with the original on the Nintendo DS, faces something of a problem for its future. These are rare games that absolutely have to be played across two screens and could not possibly be the same experience otherwise. Unfortunately there are no current dual-screen consoles out there, meaning that Etrian Odyssey is either retired now, or it’s changed to such a degree that it no longer feels like an Etrian Odyssey title.

Related reading: For people looking to get into Etrian Odyssey for the first time, the remake of the original (available on the 3DS) is a good place to start. Our review

Etrian Odyssey Nexus feels like a teary farewell to something precious. It’s absolutely everything that everyone ever loved about the series jammed into a single final, mammoth-to-the-point-of-being-bloated adventure, and while it’s messy at times because of that bloat, it’s provides exactly the sense of closure that fans needed.

For anyone who hasn’t played an Etrian Odyssey game before (where the hell have you been), these games are often credited with reigniting an interest for Wizardry-style first person dungeon crawlers in the west. They are remarkably well made, and combine a serene sense of the natural world in the way that labyrinths are constructed with classically challenging and unforgiving turn-based combat. But most importantly of all, they also feature mapping. 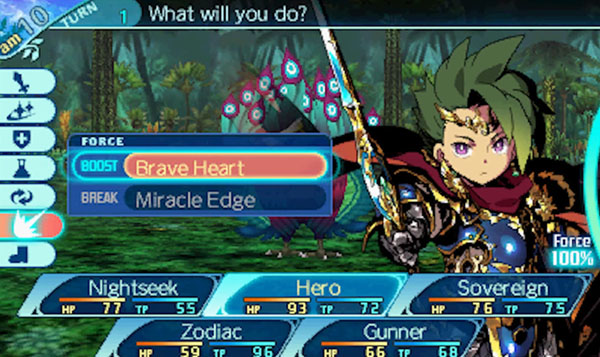 It’s the mapping that gives Etrian Odyssey a classic, nostalgic touch, despite the designs of the games being quite modern otherwise. People who played dungeon crawlers in the 80s and 90s will remember that in many cases those games had no mapping facility in-game, meaning that you were dropped into winding labyrinths with the very real possibility of getting very lost within them. Most of us solved that problem by buying a book of grid paper and creating our own maps as we played.

For many of us that was a hugely enjoyable part of the experience, in fact, hearkening back to the days of pen-and-paper Dungeons & Dragons where someone in the group was always assigned the role of team cartographer, carefully sketching down details of every dungeon that the group explored. Over the longer term those maps became a dairy or record of history for the adventure, and something we became quite attacked to as a result. Many of us who did play a lot of Dungeons & Dragons, and these early dungeon crawlers, will still have a box filled with the yellowing pages of those maps stored away somewhere.

Etrian Odyssey – and Nexus is no different – has always been focused on re-creating that experience. On the bottom screen is virtual grid paper, and as you explore the world (the top screen), you’ll constantly be pulling out the stylus to doodle in walls and colour in footpaths on the bottom screen, as well as dropping down little icons down to represent doors, treasure chests, and points of interest. This feature gives the game a distinctive feel compared to other modern dungeon crawlers (all of which feature auto-mapping), and the need to spend time filling in a map helps to slow Etrian Odyssey down a touch, and give it a sedate, reflective pacing which is perfectly in-line with the serene environments and naturalistic settings. 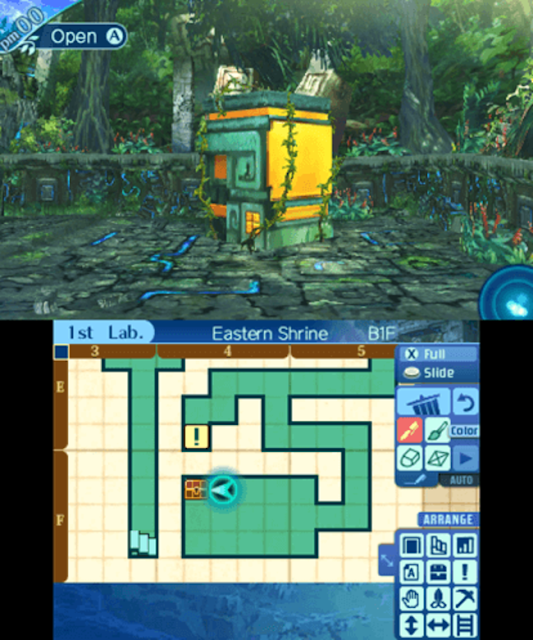 The difficulty of the combat works as a tense contrast to that theme of serenity, and yet Etrian Odyssey always brings the two together beautifully. Nexus has various difficulty settings, but the best way to play the game is on the higher difficulty, because that then forces you to make good use of the abilities of each of the characters in your party. This is especially true of the FOEs – giant monsters that patrol environments and will chase you down if they spot you. At first, they’re going to be overwhelmingly powerful, and a big part of the Etrian Odyssey experience is in figuring out a way around them that won’t draw you into fighting them. But, after getting a few levels deeper into the game, your party will be levelled-up to the point that you can come back and fight them, and this is a brilliantly rewarding way of demonstrating that through the grind you are making progress and your crew is becoming more powerful.

Building the a team that works well together is another deeply rewarding part of Etrian Odyssey. There is well over a dozen character classes available to choose between, ranging the gamut from farmers and scientists, to more traditional defensive knights, healers, archers and samurai. Each class has wildly different skills and abilities, but the best part about improving their skills is in watching how much better the team starts working together. Characters in the party boost one another, cause enemies to have specific weaknesses that other characters can then exploit, and so on and so forth. No character works in isolation better than they do when working with other party members, in other words… and that’s before you get into the middle of the game and start having to deal with sub-classes, too. This is an impressive bit of JRPG design, because balancing out the classes and making sure that the web of abilities is such that you could create an effective, complementary team with any combination of heroes, is not something that would be easy to do at all. In this way, Nexus represents the full experience of the Etrian Odyssey team, over so many titles, come fully to bear.

Etrian Odyssey isn’t perfect, mind you. The drive to recapture the nostalgic essence of the genre means that the storytelling has always come across as functional and brief. This was the case with the Wizardry games of old, but as we’ve seen with the likes of Mary Skelter, and even the Etrian Odyssey team’s own Persona Q, the genre can be turned to tell some wonderful stories. Nexus is on par for the series, sadly. The environments, monster, and character design are all appealing and interesting. It’s just a pity that more wasn’t done with it. 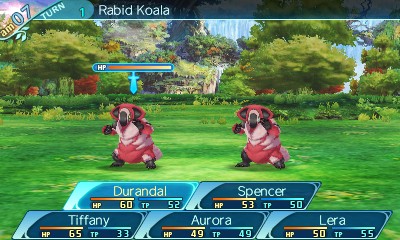 It’s going to be hard seeing Etrian Odyssey go… but it needs to. Without that mapping component, it would lose its core and soul, and with Etrian Odyssey Nexus, we’ve got a near-complete realisation of everything Etrian Odyssey has stood for for so many years. This is a good place to finish what has become a beloved series for many. Perhaps there will even be another dual screen handheld down the track, but in the meantime, farewell, dear friend!